It's GameDay: Tigers to Open Season Against UNC 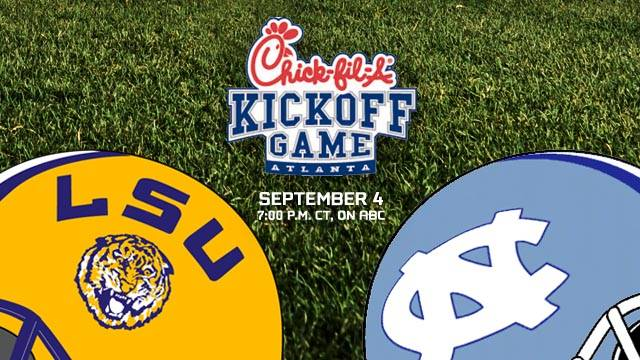 ATLANTA – Billed as the “Daytona 500” of college football, the LSU Tigers hope their motors are revved up and ready to go at full speed as the 16th-ranked (USA Today/Coaches) Tigers take part in the Chick-fil-A Kickoff Game Saturday night at the Georgia Dome against the 18th-ranked North Carolina Tar Heels.

Kickoff for the game between the Tigers (also ranked 21st in the AP poll) and UNC is set for just past 7 p.m. The game will be broadcast on the LSU Sports Radio Network affiliates (Eagle 98.1 FM is the Baton Rouge flagship) and in the GeauxZone at LSUsports.net. Back to call the game are LSU’s veteran crew of Jim Hawthorne, Doug Moreau and Jordy Hultberg. The game will be nationally-televised by “ESPN on ABC” with Brent Musburger, Kirk Herbstreit and Erin Andrews.

CST with Lyn Rollins, Greg Bowser and Hultberg will have the tape delay replay of the game Sunday night at 7 p.m. on the regional sport network.

The game turns the page for LSU on the best decade in school history in which the Tigers won 99 games, played in 10 bowl games and captured a pair of national titles in 2003 and 2007. But from that decade LSU will bring a 29-game non-conference winning streak in regular season games into the season-opener, 19 of those wins coming under sixth-year head coach Les Miles. Miles is 51-15 in his first five years at LSU.

The Tigers have won the last seven season-openers and will be going for a school-record eighth straight opening win. The Tigers are 7-1 all-time in the Georgia Dome with six of those victories coming against teams ranked in the top 15. This is the first opener for LSU against a ranked team since 2005 when the Tigers – due to Hurricane Katrina – were forced to travel to play 15th-ranked Arizona State in the first game of the Les Miles era, a 35-31 LSU win.

“I felt like our camp was a very physical one,” Coach Les Miles said of his team’s preparation. “Our guys had a great attitude and played hard and worked hard to improve. I think we all look forward to playing an opponent, and certainly going to the Georgia Dome with our fans and played a quality North Carolina team is a great way to start the season.

“The key certainly for us is to play representative of how we worked. We have worked hard to be better and worked hard to improve. Our football team is looking forward to playing hard and enjoying that opportunity as we go forward. At I look at this team it is a very close bunch of guys. They are guys that are committed to being together and work hard while enjoying each other’s company. They are a team that wanted this game and look forward to playing on national television to start it out. I look forward to taking this team to the Georgia Dome in Atlanta.”

The Tar Heels are in their fourth season under head coach Butch Davis and Friday morning announced that 12 student-athletes would not be playing in the contest. (Read UNC Release)

Six are ineligible according to the release “for violating school and/or NCAA rules” and six more are being withheld from the game “while the investigation continues.”

Three more Tar Heels did not travel with the team as they await clearance by the NCAA.

LSU leads the series with North Carolina, 5-1, and has five straight wins. The last meeting came in 1986 when the Tigers posted a 30-3 victory in Baton Rouge. This will mark the first time both teams have been ranked in the series.

Offensively, quarterback Jordan Jefferson returns to lead the Tigers after passing for 2,166 yards and 17 TDs in his first full season as a starter. He will be making his second-straight season-opening start for LSU in the game, a contest that Miles is looking to get more plays for his offense.

“It is going to be based on execution,” he said. “The more you have first downs, the more that you move the chains, it stands to reason that the longer your drives the more plays you get. If we can run the football more efficiently and if we can throw it more efficiently you are going to find that your office is more capable of getting more plays, so that is our push.”

LSU is expected to lineup with Richard Murphy and Stevan Ridley getting the first shots at the ball in the backfield with Terrence Toliver and Russell Shepard looking for the first passes from Jefferson.

With the game at a neutral site, tickets were equally distributed to both schools and Myles knows his Tigers like having their fans follow them on the road.

“I can tell you that our team has been told that around 25,000 LSU fans will join us in the Dome and we can’t wait. Our team enjoys when the purple and gold files into a stadium that we are playing in. Our push certainly is to play an LSU style of football. That involves a quality running game, a very capable throwing game, a defense that flies to the football and tackles, and special team units that are dominant with great speed in coverage and great speed on those that can return kicks,” the LSU Coach said. “That is our play is to play LSU football.”

The Tigers will remain on the road for another week, opening Southeastern Conference play at Vanderbilt on Saturday, Sept. 11, at 6 p.m. in a game televised by ESPNU. The first home game is set for Sept. 18 against Mississippi State, a game that is also set for 6 p.m.