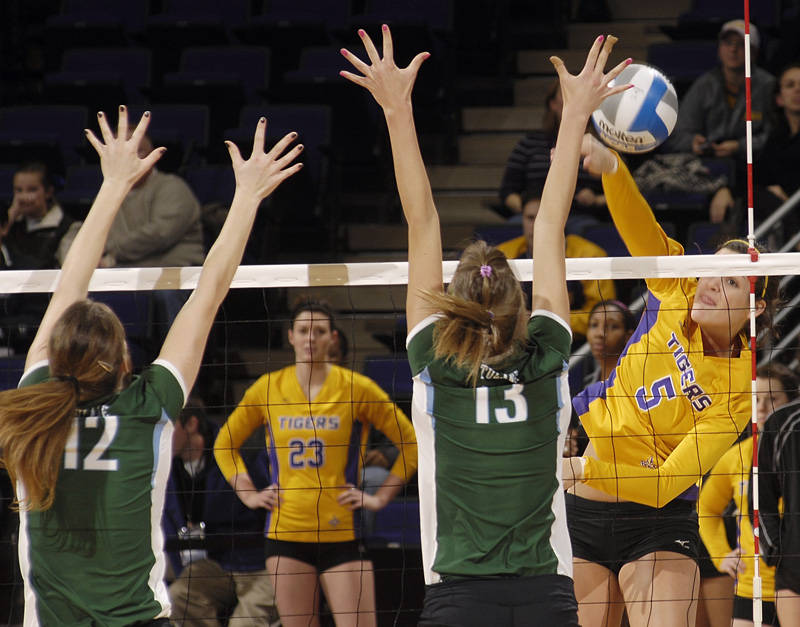 FORT WORTH, TEXAS – The No. 21 LSU volleyball team continues its Lone Star state swing over the weekend at the TCU Molten Invitational. The defending SEC champions face off against Central Arkansas and TCU on Friday before a Saturday tilt with Alcorn State.

Seven of the 14 players on the LSU roster hail from Texas, including a quartet of starters Angela Bensend [Plano], Desiree Elliott [Cypress], Lauren Waclawczyk [San Antonio] and Michele Williams [Magnolia].

“This weekend is going to be another big challenge,” head coach Fran Flory said. “TCU is an outstanding program with a great returning group. Like us, they lost in the second round of the NCAA Tournament last year. Before we get to them, we face a strong Central Arkansas team with a couple of tremendous outside hitters. They would have been a NCAA team last season had they been eligible for postseason play. Having those matches back-to-back Friday is surely going to test our young team.”

LSU is coming off an undefeated weekend and secured victories over Pacific, Siena and Texas A&M where it limited its opponents to under a .100 hitting percentage in all three matches. Bensend, Waclawczyk and Williams garnered Texas A&M Invitational All-Tournament Team honors.

Williams connected for 34 kills at a 3.40 per set average and a scorching .397 hitting percentage. It marked the second straight season that Williams picked up MVP honors on opening weekend.

Williams didn’t commit an attack error in route to 12 kills on 19 swings and a career-best .632 clip against Texas A&M. She also notched 15 blocks and ranks second in the SEC.

“Michele has been overshadowed by the All-Americans that have played in front of her,” Flory said. “It’s not a surprise to us that she has had this type of start to her season. The key for us is to continue to create for her.”

Bensend paces the Tigers with 37 kills and her 4.11 kills per set rank third in the SEC. The Tigers have won 16 of 17 matches when she reaches double figure kills over her career.

“Angela has done an excellent job of developing into a six rotation player,” Flory said. “She hasn’t had to carry that type of load and has been able to play strong in every aspect of the game.”

Waclawczyk spearheaded LSU’s back row with 40 digs and her 4.00 digs per set are tied for fourth in the SEC. She also distributed 13 assists and added five aces.

“Lauren has really stabilized our libero position,” Flory said. “I’m proud of the work she put in and how she has developed. Our passing and defense is what this team is going to be known for. Our goal is to never let the ball hit the floor and create offense in transition. That’s something we chose to build on during the offseason, and we’re excited that it’s proven to be a real strength.”

Brittney Johnson headlines the SEC with 10.75 assists per set and has fueled the Tigers to over a .300 hitting percentage in five of her last six sets, including all three sets of LSU’s 3-0 win over Texas A&M.

Madie Jones recorded 18 kills on a .304 hitting percentage off the bench. She totaled seven kills apiece, one shy of her career-high, against both Pacific and Siena.

After producing 19 digs in 2009, Meghan Mannari was third on the squad and corralled 26 digs during opening weekend. She also was 17-for-17 in serve-receive.

First serve for Friday’s match against Central Arkansas is slated for 11 a.m. with live stats available on LSUsports.net. Fans also can follow live in-match updates on the team’s official blog at http://lsuvolleyball.posterous.com.