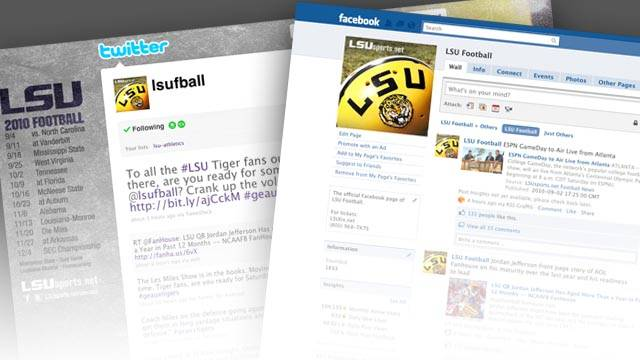 BATON ROUGE – When LSU opens the 2010 football season on Saturday against North Carolina in the Georgia Dome, fans will be able to follow the Tigers through social media like never before.

Starting with the team’s departure from campus on Friday afternoon, LSU will provide the ultimate social media experience for Tiger fans with behind-the-scenes photos and video as well as updates through Facebook and Twitter.

Fans can follow LSU football’s official Facebook and Twitter pages, Facebook.com/lsufootball and Twitter.com/lsufball, to receive updates and inside information throughout the weekend. LSU’s official Facebook site for football – Facebook.com/lsufootball – currently has more than 175,000 followers making it second in college football to only Penn State’s Facebook site.

View All Sports at LSUsports.net/connect

“We are excited about the opportunities that technology has given us. Social media is a great way to give our fans an inside look at the LSU football team.”

Some of the things that LSU fans can expect through Facebook and Twitter include a look inside the LSU locker room prior to kickoff, comments from coach Les Miles as he walks the field during pre-game, and game notes and score updates as they happen.

After the game, fans will be able to watch interviews with the players, which will also be available on the LSU Athletics YouTube page at www.youtube.com/lsusportsnet.

To check out a complete list of all the LSU Athletics social media sites, fans can log on to www.LSUsports.net/connect.