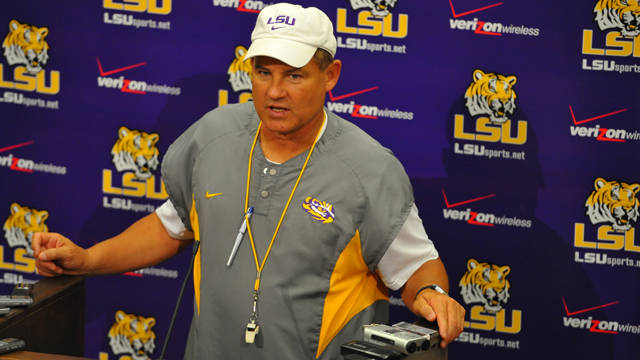 BATON ROUGE – LSU’s preparations for the season-opener against North Carolina continued on Wednesday as the Tigers held a helmets and shoulder pads practice indoors at the Charles McClendon Practice Facility.

With the season-opener three days away, the Tigers will hold a light workout on Thursday followed by a walk-through on Friday morning. The Tigers will depart for Atlanta at 1 p.m. on Friday.

LSU and North Carolina open the 2010 football season on Saturday in Atlanta at 7 p.m. CT in the third Chick-fil-A Kickoff Game in the Georgia Dome. The game will be televised nationally on ABC. It will be the first meeting between the teams since 1986.

“We have had a very good week of work and I like where we are,” LSU coach Les Miles said following Wednesday’s workout. “Certainly we are not ready to play today, but I like how this team works. It is a fast-pace and get-after-it type of club and it’s been a fun group to coach. We’ve had good preparation so far. We are all ready to get the season started.

“The fact that we have come into the season with great ambition and want, and we have a very young team with a great attitude and youthful enthusiasm we have to start out fast. We are looking forward to it. This is going to be a great game and a great team to open with on national television in the Georgia Dome against a nationally ranked opponent.”

Miles announced on Wednesday that junior tight end Deangelo Peterson will miss the North Carolina game with a foot injury.  The Tigers will also be without linebacker Ryan Baker (jaw), safety Karnell Hatcher (knee) and wide receiver Chris Tolliver (head) for the season-opener.

“I would say that he’s out this weekend,” Miles said of Deangelo Peterson. “It’s a foot injury, but it shouldn’t keep him out for a very long period of time.”

Miles said LSU will look to Mitch Joseph, Chase Clement and Tyler Edwards to fill in at tight end for Peterson.

Saturday’s game will mark the first neutral site season-opener in school history and the second straight year in which the Tigers will open the year away from Tiger Stadium. Last year, LSU brought over 10,000 fans to Seattle for the Washington contest. LSU has sold over 24,000 tickets for the North Carolina game.

“I can tell you this, and this is a fact, every place we play, when we pull up and see purple and gold that bus catches on fire and our football team loves to play for them,” Miles said. “It makes no difference where it’s at. I can’t tell you how many away trips that I have been on where I saw that purple and gold greet the bus, and the smiles on our kids’ faces when they get off the bus.

“Then inside the stadium, wherever the stadium is that pocket of purple and gold is always there. I want you to know that is what we want to get and I am excited about it and look forward to that opportunity to play on Saturday night.”