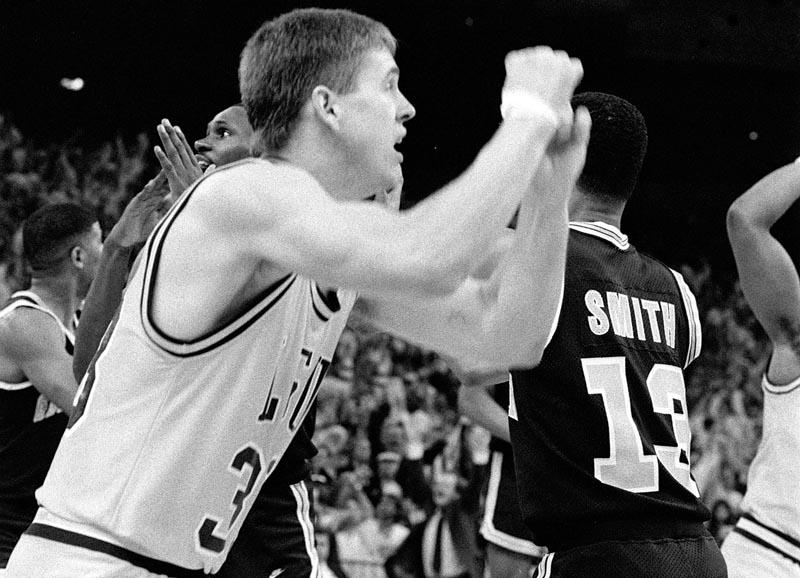 BATON ROUGE — Ricky Blanton may not have come to LSU as one of the greatest recruits in the program’s history.

But over 20 years since his final season at LSU, he remains one of the most remembered and most beloved Tigers the program has ever had.

For a career in which he adapted to the need to bulk-up and be LSU’s center to his outstanding play that led to two of the Tigers’ most memorable game-winning shots in his senior year, he is joining the distinguished members of the Louisiana Basketball Hall of Fame.  He will be inducted on May 1 in Baton Rouge at the group’s annual banquet.

“I am very honored to be selected into the Louisiana Basketball Hall of Fame,” said Blanton.  “I am humbled to be in the company of so many great players and coaches.”

The trip to the Hall of Fame began innocently enough as another recruit of LSU.

LSU head coach Dale Brown liked what he saw in Blanton, who prepped at Killian High School in Miami, Fla., but even Brown couldn’t fathom what was to come.

“I saw the great character and determination in Ricky, but (then associate coach) Ron Abernathy saw his talent more so then I did,” said Brown recently.  “There is no way I ever would have imagined he would ever play center for us.”

“Coach Brown and his staff did a tremendous job of recruiting me,” Blanton recalled.  “The opportunity to play in the SEC and compete on a national level was very attractive.”

Well, you don’t make the LSU 16-man Team of the Century selected in 2009 by being just a role player.  You have to make your mark in Tiger history and Blanton did just that.

Blanton was little more than a bit player during LSU’s 1985 SEC championship season, averaging 3.5 points and 1.8 rebounds per game and he experienced the frustration that many freshman face.

“I think every freshman experiences the frustration of not playing as much as they’re used to,” Blanton said at that time.  “I think I did a wise move by staying.  It really paid off.”

That payoff came just one season later when the Tigers would have one of the dream seasons in college basketball history.  The Tigers won their first 13 games but when center Nikita Wilson was declared ineligible, and with 7-1 Zoran Jovanovich (injury) and 7-0 Tito Horford (dismissed) out as well, there was no one left to play center to help star forward John Williams as the Tigers tried to go through the SEC season.

But Brown had an idea.

“After he arrived at LSU and the more I watched him I fully realized what a gem we had,” he said.  “After we lost all three of our centers my first reaction was that there is one person I believe in that could fill this impossible role and that was Ricky.  When I called him to my office and told him my plan he looked shocked but told me if that is what I want he would do it.”

The Tigers were inconsistent during the conference season and went 9-9 in the league.  They were given just an eleven seed by the NCAA selection committee, but they also were given one of the great breaks ever.  They were the last team to ever host and play in a first and second round … all at the Pete Maravich Assembly Center.

First, an unhappy Purdue team fell to LSU by a 94-87 score in double overtime, and then an Anthony Wilson bucket at the buzzer sent LSU to the Sweet 16 with an 83-81 win over Memphis State.

It was in the NCAA Tournament that the 19-year-old sophomore Blanton began to establish himself as a center that had bulked-up to play the position at 6-7.  He held Memphis State’s 7-0 center William Bedford to just two points and one rebound in the second half and would follow that in the regional semifinals by holding Georgia Tech’s 6-11 John Salley to three second-half points and Kentucky All-American Kenny “Sky” Walker to four points and three rebounds in the second half.  For his efforts, he was named to the NCAA Southeast Regional All-Tournament team.

The iconic symbol of LSU basketball for years came in the game that sent the Tigers to the Final Four.  After his last-minute layup nailed down the upset victory over third-ranked Kentucky, Blanton raced down the court shaking both fists in a circular motion over his head.

“Our 1986 Final Four run was very memorable,” said Blanton.  “When we beat Memphis in the second round in Baton Rouge, it was the loudest I have ever heard the PMAC.  The Final Four atmosphere as a player is something I am proud to say I was a part of.”

Blanton would miss out on the 1986-87 season, a year when the Tigers went to the Elite Eight, after preseason knee surgery.

But he would have two seasons left and his role changed to one of scoring and leadership.  He was the Tigers’ co-captain in 1988 and its leading scorer and rebounder with 17.0 points and 8.8 rebounds per game, winning a berth on the coaches’ All-SEC team and earning All-Louisiana honors.  He won hearts across the league and nation when he led LSU to a win over Vanderbilt in the SEC Tournament at the Assembly Center just three days after the death of his best friend, former teammate Don Redden.

“For the first time in my life, I don’t remember thinking about basketball before a game,” Blanton said.  “I don’t remember anything until the shootaround before we warmed up.”

Blanton played 40 minutes.  He finished with 30 points and LSU won, 87-80.  He was later named to the SEC All-Tournament team.

But his 1988-89 senior season provided Blanton and LSU fans with more memories that would cement his reputation as one of the players fans would always talk about.

First, 1989 was one in which the Tiger program wasn’t expected to be as successful as LSU fans expected.  The so-called experts said this would be the year that other teams would pounce on the Tigers.  But the fans hadn’t seen a freshman named Chris Jackson on the court yet.  After scoring 48 against Louisiana Tech and 53 at Florida in the SEC opener with Blanton dishing most of the passes, LSU fans were ready to see where the season would take them.

It may have been the Chris Jackson show on the court, but Blanton was the guiding light.

Sportswriter Sam King called them “Action Jackson” and “Reaction Blanton.”  The two often let their eyes do the talking to put them in the right spot to make open shots or receive the pass.

Highlighting the season was a magical Saturday afternoon at the Louisiana Superdome.  Dale Brown dreamed of setting a college basketball record for attendance and with the No. 2 ranked Georgetown Hoyas the opponent and Brown’s promotion talents on overdrive, an NCAA regular season record 54,321 fans were on hand for the game and Blanton provided the nationally-televised moment that had the Dome rocking.

Undermanned LSU played Georgetown tough throughout and had the lead at several portions of the game.  The game was tied late and LSU had the final possession.  Russell Grant missed a three-pointer, the rebound somehow fell in Blanton’s hands and he put the ball back up and in just before the buzzer to give LSU a magical 82-80 victory.

“Obviously, one of my biggest memories at LSU was making the game-winning shot against Georgetown in the Superdome,” Blanton remembered.  “The fact that Georgetown was nationally ranked and it was the largest regular season attended game at the time added to the excitement of the win.”

Now one great finish is one thing, but Blanton got another one before his career was done.  Back in the PMAC, Blanton buried a three-pointer in the final seconds for an 88-87 win over 18th ranked Nevada-Las Vegas.  Blanton was in his favorite spot in the far corner of the court and swished the shot for the win.

“That’s my spot,” Blanton said at the time.  “I don’t know, for some reason I like it over there.  I had a good feeling on that one.”

He finished his career with 1,501 points and 766 rebounds.  Even after 20-plus years, his numbers still remain 16th all-time in scoring at LSU and 15th in rebounds.  He also had a 53.2% career field goal percentage and shot 72.9% from the free throw line.

Blanton was drafted by the Phoenix Suns in the second round of the 1989 NBA Draft.  After his pro basketball career ended, he would later serve as an assistant coach during Dale Brown‘s final season in 1996-97 and then two years as head coach at Nicholls State University.  Today, he remains involved in the LSU basketball program as one of the color announcers for the LSU Sports Radio Network.

Ricky Blanton – a role player who did whatever LSU asked him to do that would help the team be successful on the court.  He became a star LSU fans will always remember and they are happy to have him back as a small part of the program again.

The Hall of Fame induction ceremonies will be held in conjunction with the Louisiana Association of Basketball Coaches’ 36th Annual Awards Banquet at the Embassy Suites Hotel in Baton Rouge.

In addition to the induction of the new Hall of Fame member, the banquet will include recognition of Louisiana’s major college, small college, junior college and high school players and coaches of the year, the top pro player from the state, and the presentation of the prestigious Mr. Louisiana Basketball award to the long-time sports editor of the Ruston Daily Leader, O.K. “Buddy” Davis.

A limited number of tickets for the banquet are available for $25 and can be reserved by contacting Scott Landry at (225) 205-8594.  The Embassy Suites Hotel is located at 4914 Constitution Avenue in Baton Rouge (College Drive exit off of Interstate 10).

The Louisiana Basketball Hall of Fame is sponsored by the LABC.  The Hall of Fame was created in 1975 to honor former great basketball players and coaches from Louisiana colleges.  You can learn more about the LABC and the Hall of Fame by visiting their website at www.labball.com.