UNO Pulls Away from Tigers, 7-4 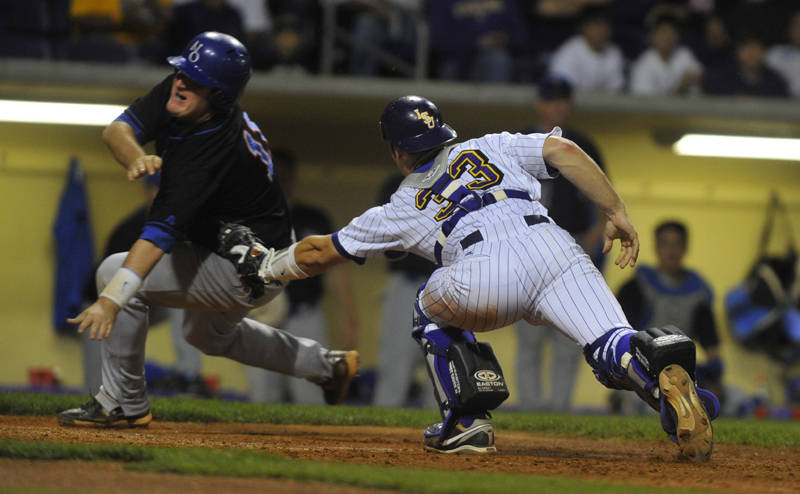 LSU will be back in action this weekend when it travels to Gainesville to take on No. 6 Florida in a three-game series beginning Friday at 7 p.m. CT.

“I knew UNO had a very capable offensive club because I’ve coached against their players for four years,” said LSU coach Paul Mainieri. “They played well, and they deserved to win. We have to re-direct our efforts and get ready for a very challenging series this weekend at Florida.”

The Tigers got out to an early 1-0 lead in the first inning when Mahtook was hit by a pitch, stole second and later scored on an infield ground out by Blake Dean.

After the Privateers tied the score at 1-1 in the second, LSU responded with back-to-back doubles by Grant Dozar and Mahtook to break the tie. Austin Nola followed with an RBI single that scored Mahtook and put the Tigers ahead 3-1.

In the third, UNO second baseman Nick Schwaner belted a solo homer to right to pull the Privateers to within one at 3-2. The homer was Schwaner’s 15th of the season.

The Privateers added another run in the fourth after an RBI double by left fielder Roddarick Jones to knot the score at 3-3.

With runners on second and third and one out in the sixth, LSU reliever Paul Bertuccini forced a sac fly to right field off the bat of Tyler Sanford. Mahtook caught the pop fly and fired a strike in to Gibbs at the plate to tag out Jerad Comarda, who was tagging from third on the play.

UNO took the lead in the eighth when Schwaner doubled to lead off the inning, advanced to third on an errant pick-off throw by LSU reliever Austin Ross and scored on a sac fly RBI by Comarda to go up 4-3. The Privateers took a 5-3 lead on a two-out RBI single by Jones.

Freshman left-hander Jordan Rittiner (4-2) was charged with the loss after allowing the double to Schwaner, the only batter Rittiner faced in the game.

The Tigers pulled within one at 5-4 with two outs in the eighth when Mahtook beat out an infield single that allowed Matt Gaudet to score from third.  Mahtook’s RBI single came on an 0-2 count from UNO reliever Kevin DeGrouttola. DeGrouttola would get out of the inning when he forced Nola to ground into a fielder’s choice to end the inning.

UNO pulled ahead in the ninth, 6-4, on a hit-and-run double by center fielder Mike Petello scoring Ryan Eden from first, who led off the inning with a single. Later in the inning, Comarda singled up the middle to score Eden from third and give UNO a 7-4 advantage.

The Tigers threatened in the bottom of the ninth with back-to-back singles to start the inning, but after reliever Kevin Berry forced a double play, he fanned Gaudet to end the ball game and earn his first save of the season.