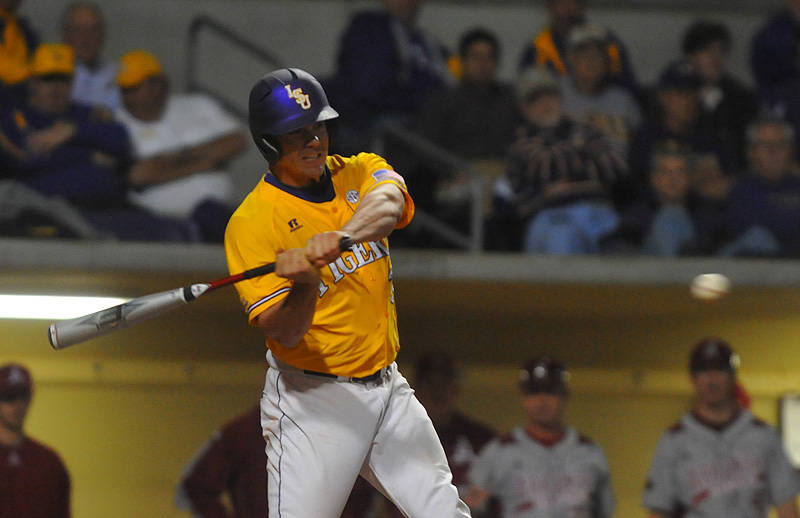 OXFORD, Miss. – Second baseman Alex Yarbrough’s RBI single in the bottom of the 11th inning Saturday night lifted No. 19 Ole Miss to a 9-8 victory over fifth-ranked LSU at Swayze Field.

The win gave Ole Miss a sweep of Saturday’s doubleheader as the Rebels captured Game 1 by an 11-9 count.

“These are tough losses, but I’m very proud of the way our players competed in a hostile environment against a very talented Ole Miss team,” said LSU coach Paul Mainieri. “We’ll turn the page and look forward to Sunday’s game.”

The series will conclude at 1:30 p.m. Sunday, and the game can be seen on Comcast Sports Southeast and Cox Sports Television. Game 3 may also be heard on the LSU Sports Radio Network, and audio and live stats are available at www.LSUsports.net.

Ole Miss first baseman Matt Smith led off the 11th with a double against LSU reliever Matty Ott before Ott walked designated hitter Matt Snyder. Third baseman Zach Miller  popped out on a bunt attempt and shortstop Kevin Mort flied to right before Yarbrough singled up the middle to score Smith and give Ole Miss the win.

Ole Miss reliever Matt Crouse (4-1) earned the win, limiting the Tigers to no runs on one hit in 2.2 innings with one walk and four strikeouts.

Ott (1-1) was charged with the loss as he allowed one run on two hits in 3.2 innings with three walks and four strikeouts.

The Tigers scored four runs in the top of the first inning of Game 2 as rightfielder Mikie Mahtook led off the game with a solo homer, centerfielder Leon Landry delivered an RBI groundout and designated hitter Matt Gaudet blasted a two-run dinger, his 14th of the season.

LSU increased the lead to 5-0 in the second on shortstop Austin Nola’s sacrifice fly.

Ole Miss, however, roared back with a run in the third and four runs in the fourth to tie the game. The rally was highlighted by a two-run homer from pinch hitter Taylor Hashman in the fourth.

The Rebels took an 8-5 lead in the fifth on Hashman’s bases-loaded double.

LSU rallied to tie the game with three runs in the seventh on RBI singles by first baseman Blake Dean and catcher Micah Gibbs, and an RBI double by Gaudet.

In Game 1, LSU grabbed a 2-0 lead in the top of the first inning when first baseman Blake Dean launched a two-run homer off of Ole Miss ace Drew Pomeranz.

Ole Miss responded with three runs in the bottom of the frame against LSU starter Anthony Ranaudo as first baseman Miles Hamblin unloaded a two-run homer and Snyder belted a solo dinger.

The Rebels erupted for six runs in the second against Ranaudo as Snyder’s grand slam highlighted the uprising.

The Tigers added another run in the fourth on a sacrifice fly by Gibbs.

Gaudet launched a three-run homer in the sixth to cut the deficit to 9-8, but Ole Miss centerfielder Tim Ferguson responded with a solo shot in the bottom of the frame to give the Rebels a two-run lead.

Gaudet hit his second dinger of the game, a solo shot,  in the eighth to bring LSU to within one run at 10-9.

Ole Miss added an insurance run in the bottom of the frame when Snyder delivered an RBI single. Brett Huber earned his fifth save by retiring LSU in order in the ninth.

Ranaudo (2-1) was charged with the loss as he surrendered nine runs on nine hits in 1.2 innings with one walk and two strikeouts.

Ole Miss reliever Rory McKean (3-1) earned the win, as he allowed three runs on five hits in three innings with no walks and two strikeouts.