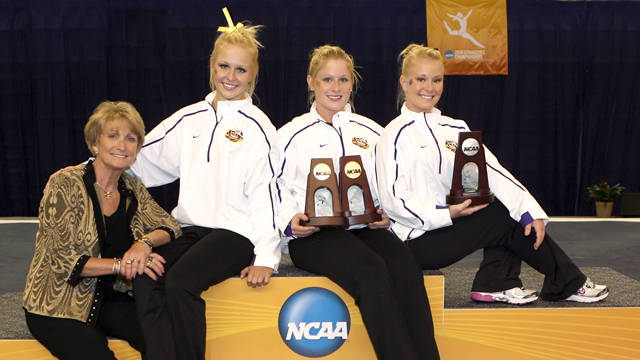 Jackson scored a 9.9625 on beam – nearly one full point ahead of second place – to finish her career with a school-record three individual national titles. Jackson won the vault crown as a sophomore in 2008 and the all-around national title Thursday.

Not only did Jackson end her career on top, but fellow senior Summer Hubbard nearly joined her with a runner-up finish on bars.

Hubbard, a three-time First Team All-American on bars, posted a 9.9250 score to tie for second place on bars – just one one-hundredth of a point behind the 9.9375 from Stanford’s Carly Janiga.

Jackson earned the runner up spot on vault for the second straight year with a 9.8938 average, identical to her runner up score in 2009, and she also finished fourth on bars with a 9.9125 score.

“Susan and Summer are great leaders in competition, in the classroom and in the community that really make a difference,” head coach D-D Breaux said. “I don’t know if I have ever been as proud of a group and a class to come together and do such a great job tonight with the other two seniors, Kayla Rogers and Sabrina Franceschelli, cheering them on.”

Although Jackson’s beam score was not a perfect 10.0, the Spring, Texas native said it was the best routine of her life.

“Everything was just right,” Jackson said. “It was exactly how I would have wanted to do it, but when I landed the dismount I felt like I was going to step. But I threw my arms back, and the stuck landing was there.”

Breaux greeted Jackson with a huge hug when Jackson left the beam platform as Breaux was just as excited to see her senior nail the near-perfect performance.

“It was the best beam routine I have ever seen from Susan Jackson,” Breaux said. “It was such a fitting way for Susan to end her career.”

Competing for the first time in the Individual Event Finals, sophomore Ashley Lee earned a top 10 finish on vault with a 9.7625 to tie for ninth.

With the beam title, LSU has now had at least one individual national title in three straight years and four out of the last five.