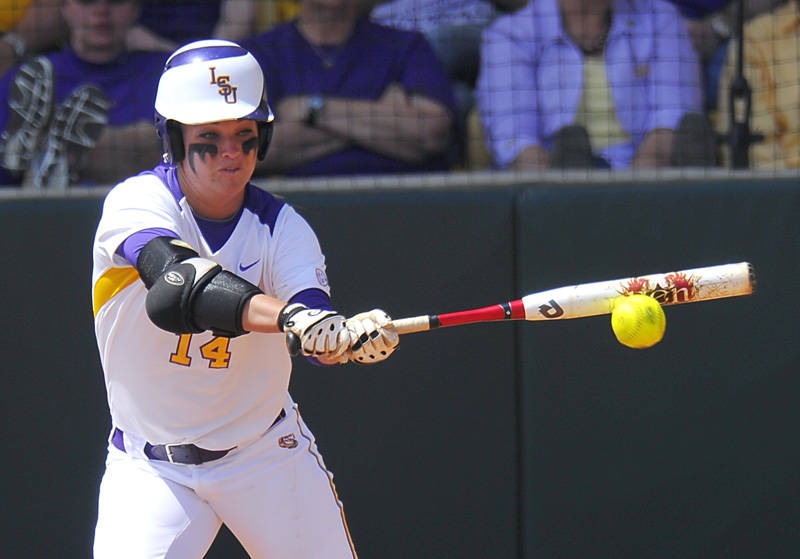 LEXINGTON, Ky. – The No. 16 LSU softball team picked up a 5-2 five-inning victory over Kentucky Saturday to open a SEC series at the UK Softball Complex. Due to heavy rain, the two teams will complete its weekend series with a Sunday doubleheader slated to start at 9 a.m. CT.

Rachel Mitchell belted a three-run home run to left centerfield to vault LSU out a 3-0 edge in the first inning. Kirsten Shortridge and Ashley Applegate set the table for Mitchell with back-to-back singles down the left field line.

“It was vintage Tiger softball and nice for us to get off to a quick start,” head coach Yvette Girouard said. “We haven’t had one of those in a while, and we received some big hits from Rachel Mitchell, Jessica Mouse and Kirsten Shortridge. We have a ton of respect for Kentucky, and I thought it was imperative for our mindset for us to start fast.”

Shortridge struck for an infield single en route to her 22nd multi-hit effort to start the fourth inning. She stole second base and came around to score on a Langoni RBI-single to extend the LSU advantage to 4-0.

Annie Rowlands put the Wildcats on the board in the home half of the frame with a two-out RBI-single to make it 4-1. Rachele Fico got out of a bases loaded situation by getting All-SEC Preseason Team selection Molly Johnson to ground out.

LSU (37-10, 15-5 SEC) fired back aided by some two-out magic during the fifth inning as Allison Falcon was hit-by-a-pitch. On the next offering, Jessica Mouse cranked a RBI-double to plate pinch runner Katie Guillory to push the Tigers ahead 5-1.

Fico worked out of another bases loaded jam, this time with no outs in the bottom of the fifth. Brittany Cervantes pulled Kentucky back to 5-2 on a sacrifice fly.

The Wildcats (29-19, 11-12 SEC) moved runners into scoring position on a Meagan Aull fly ball before reloading the bases via a Destinee Mordecai walk. Fico forced Rowands into another fly ball as Mitchell made a running catch from her right field post to keep the score at 5-2.

Fico was touched up for two runs, one earned, on five hits. She worked around a season-high six walks to improve to 15-4 on the season. Kentucky’s Chanda Bell was tagged with the loss to drop to 16-11.

“We got ourselves into trouble at times with some of their best hitters up, but credit Rachele because she made some big pitches to get out of those situations,” Girouard said. “She didn’t have her normal big strikeout numbers. I also thought our defense made some big plays behind her in critical spots.”

Both of Sunday’s games will be broadcasted live on ESPN 104.5 and The X 104.9 FM in the Baton Rouge area with Matt Dunaway and Patrick Wright set to call the action. Live stats also are available in the Geaux Zone on LSUsports.net along with in-game updates via http://twitter.com/lsu_softball.