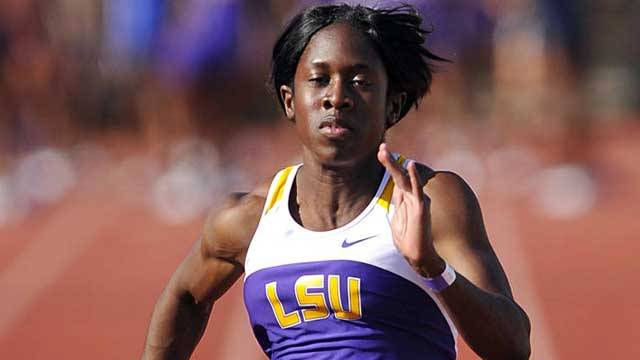 PHILADELPHIA – The No. 2-ranked LSU women’s track and field team is off and running at the 116th Penn Relays after advancing a pair of relay teams into Championship of America finals to be run later this weekend on the opening day of competition at Franklin Field at the University of Pennsylvania.

It proved to be a successful day of qualifying for the Lady Tigers as they earned the right to line up in two Championship of America finals in both the 4×100 and 4×400-meter relays.

The sprint relay team was the first to step onto the track for LSU and was impressive while running in the third preliminary heat. The Lady Tigers posted the second-fastest time of the qualifying round.

Running with a team of senior Samantha Henry, freshman Kimberlyn Duncan, freshman Takeia Pinckney and senior Kenyanna Wilson, the Lady Tigers sprinted to the finish line with a seasonal-best time of 43.25 to win their preliminary heat by nearly three seconds. Only the foursome from Texas A&M clocked a faster qualifying time on Thursday afternoon at 43.13.

The LSU women then wrapped up the Thursday’s qualifying action by running the fifth-fastest time in the prelim round of the 4×400-meter relay. Junior Brittany Hall, sophomore Cassandra Tate, senior Kayann Thompson and senior LaTavia Thomas combined for a qualifying time of 3 minutes, 34.85 seconds.

Thomas, who is competing in her hometown of Philadelphia for the last time in an LSU uniform, clocked a blistering 51.10-second split on the anchor leg for the Lady Tigers.

Three LSU distance runners wrapped up the opening day of the 116th Penn Relays by setting new lifetime personal records in their respective events. Junior Michael Florek (14:32.70) and sophomore Jenna Henssler (17:55.34) each ran PRs in the 5,000 meters, while sophomore Richard Chautin (30:28.04) ran a personal best of his own in his first career 10,000-meter race.

It was quite a debut for Chautin in the 10,000 meters as his time moves him into the No. 9 position on the all-time outdoor performance list at LSU.

“I thought our sprint relay was outstanding. They really got us off to a good start today with the way those four women lined up and got it done,” said LSU head coach Dennis Shaver. “This is as deep a field in that event as we’ve seen at the Penn Relays with five of the top six teams in the country this season all making it to the final. This is exactly the field we expect to see in the NCAA final.

“While I am very pleased with the effort of our sprint relay today, I am just as disappointed in the way our 4×400 performed in qualifying. LaTavia Thomas gave us a great anchor leg, but it takes that kind of effort from everyone on the team. We have to give it everything we’ve got to be in position on Saturday.”

Senior Kim Williams kicked off the day’s events by throwing 186 feet, 7 inches to take the runner-up spot in the women’s championship hammer throw. Sophomore Brieanna Kennedy followed Williams with a personal-best performance in the college section of the women’s hammer throw as she recorded a mark of 172-9 en route to a fourth-place finish in the competition.

LSU’s string of two-straight titles in the women’s championship pole vault came to an end Thursday with senior Katelyn Rodrigue earning the team’s top finish of sixth place with a clearance at 12-11 ½.

“Overall, it was a disappointing day for us in all of the field events,” Shaver said. “We need to build some consistency there and didn’t really take advantage of our opportunity to do that today. We need to show improvement this weekend as this is the last time we will compete before the championship season.”

The action continues for LSU on Friday with the first events on the track scheduled to get underway at 8 a.m. CT. In addition to running the final of the women’s 4×100-meter relay, three other Championship of America relay titles will be on the line during Friday’s competition as the Tigers and Lady Tigers will run in the finals of the men’s and women’s sprint medley relays and the men’s distance medley relay.

Fans can watch live streaming video of all the events on the track by logging on to the official website of the 116th Penn Relays at www.thepennrelays.com.