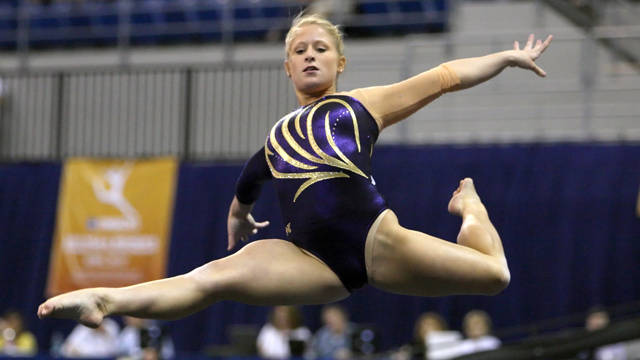 GAINESVILLE, Fla. – LSU senior gymnast Susan Jackson continued her assault on the school record books as she became the first Tiger in school history to win the all-around national title with a 39.625 performance in the first session of the NCAA Championships Thursday at Florida’s Stephen C. O’Connell Center.

Jackson also broke the school record for all-around titles in a single season with her 11th, and it could not have come on a bigger stage.

“I am so proud of Susan because she has worked so hard over the course of her career, not only in the gym but in all areas of her life,” head coach D-D Breaux said. “She deserved to win the all-around title because she has tremendous talent, and I am so happy that she ended her career as the national champion.”

The ninth-seeded LSU gymnastics team fell short of a third straight Super Six appearance as the Tigers finished sixth with a 196.025 total.

LSU (15-13-1) was in a tight battle with UCLA and Oklahoma entering the final rotation, but the Tigers were unable to maintain momentum as they had to count a fall on beam.

LSU began the meet on a bye, and no team put up a high score in the first rotation as Utah tallied a 49.100 on floor and Oklahoma posted a 49.000 on vault.

In the second rotation, LSU opened on floor for the second straight meet, and the Tigers earned a 49.000 to post the team’s highest score in the event since March 19 at Centenary when the team tallied a 49.050.

Kayla Rogers led off floor with a 9.85 to jumpstart LSU, and Ashley Lee followed with a solid 9.75. After Sabrina Franceschelli fell on her final pass to score a 9.225, the pressure was on the rest of the lineup to hit their routines.

Summer Hubbard showed outstanding poise to earn a 9.85, and Samantha Engle avoided a fall to finish with a 9.70. Susan Jackson anchored the event with a 9.85 to tie Rogers and Hubbard with team-high scores.

Lee turned in the best vault of her career as she stuck her landing for a 9.90, good enough for third place in the meet and First Team All-America honors.

Gloria Johnson and Ericka Garcia followed Lee with 9.75’s, and Jackson recorded a near-perfect vault with a 9.95 to anchor the event.

After the final bye of the meet, LSU excelled on bars with a 49.300, the second-highest team total for LSU on the event all season.

However, the Tigers had to fight through a dramatic turn of events to begin bars. Franceschelli led off, but the grip on her left hand split open, forcing her to quit and jump down from the event.

Franceschelli and assistant coach Philip Ogletree showed the ripped grip to the head judge, and Franceschelli was granted a second chance. However, she had to go at the end of the lineup to give her an opportunity to find a suitable replacement grip.

Because Franceschelli was bumped down to the end of the lineup, everybody moved up one spot.

Freshman Shelby Prunty took the leadoff spot and came through with a 9.775, and LSU carried that momentum through the rest of the lineup.

Garcia posted her third-highest score of the season with a 9.80, and Engle followed with a 9.85 to earn Second Team All-America recognition.

Hubbard earned a 9.90 for her third First Team All-America honor in the event, and Jackson recorded the highest bars score in the meet with a 9.925.

With LSU looking for an outstanding bars score, Franceschelli mounted the bars with a new grip and earned a 9.825 – just .025 off her season high – to give the Tigers a 49.300 total.

“Sabrina overcame a lot of adversity because not many people could have gotten up and done what she did,” Breaux said.

Through three events LSU was in second place with a 147.400, trailing only UCLA’s 147.475, but while the Tigers were putting up a solid bars score, Utah was ending its meet on beam. The Utes posted an outstanding 49.250, the highest beam score of the meet, to finish with a 196.625 total.

Heading into the sixth and final rotation, LSU was in a three-way battle for the final two spots with UCLA and Oklahoma.

Prunty showed great poise to record a season-high 9.825 in the leadoff spot, but the Tigers were unable to hold the momentum.

Johnson finished three-quarters of her routine when she lost balance and fell off the beam to finish with a 9.325.

With the pressure on the rest of the Tigers to hit, Garcia notched a 9.80 to keep LSU in contention, but Hubbard suffered a fall to score a 9.325.

Engle tallied a 9.775 in the fifth spot, and Jackson recorded a 9.90 to cap the meet with her third First Team All-America honor as LSU finished with a 48.625 on beam.

In the last rotation, UCLA earned a spot in the Super Six with a 49.400 on vault while Oklahoma punched a ticket with a 49.250 on floor.