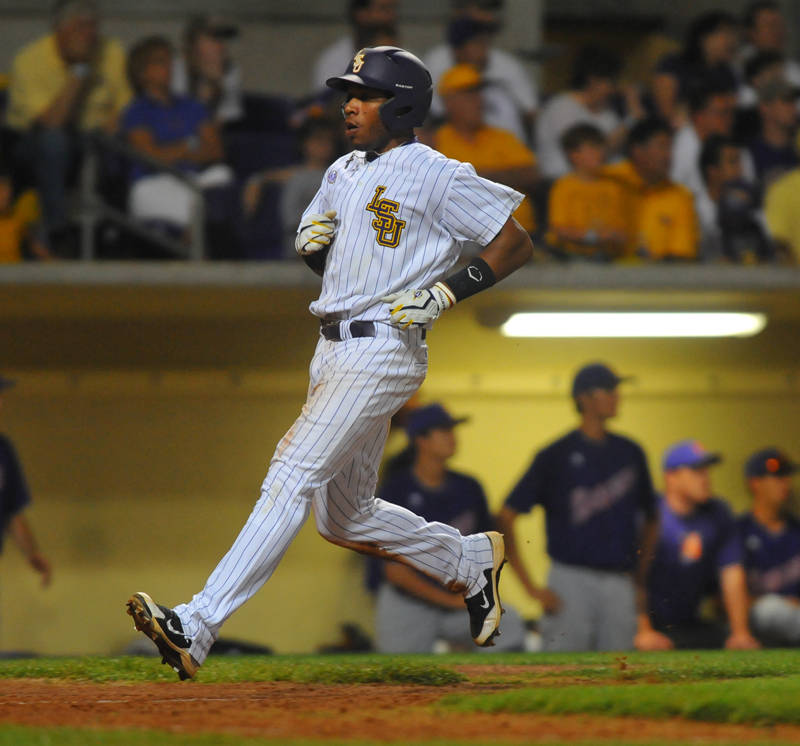 The Tigers (32-6) are on a six-game winning streak and remain undefeated in mid-week contests this season. Northwestern State dropped to 25-12 with the loss.

Game 2 of the series begins at 3 p.m. Saturday, and it will be televised by FSN. The series finale on Sunday starts at 1:30 p.m., and it can be seen on both Comcast Sports Southeast (CSS) and Cox Sports Television (CST).

In addition to Nola’s three RBI on Wednesday, second baseman Tyler Hanover went 3-for-4, and left fielder Johnny Dishon notched a 2-for-4 performance with a double and a pair of runs scored.

“This wasn’t the most artistic win we’ve had here,” said LSU coach Paul Mainieri, “but we found a way to get it done. I’m really proud of our kids for coming back from an early deficit against a very good team and earning a victory.”

In the seventh, the Demons pulled within one at 6-5 after Chase Lyles singled home Aaron Munoz off LSU reliever Jordan Rittiner (4-1). With the bases loaded and two out in the inning, the Demons tied the game at 6-6 when first baseman Adam Roy reached safely on a fielding error by Nola, enabling Eric DeBlanc to score from third.

LSU regained the lead in the eighth inning after right fielder Alex Edward ripped a double to right, his first career hit as a Tiger, and later scored on a throwing error by Northwestern State shortstop Joshual Gardiner that allowed Nola to reach base safely and put LSU ahead 7-6. Nola advanced to second on Gardiner’s errant throw and then scored when the next batter, Blake Dean, slammed a single though the right side to give the Tigers an 8-6 lead.

Austin Ross earned his first save of the season as he retired the Demons in order in the ninth to secure the 8-6 victory.

The Demons erupted for four runs in the top of the first on a pair of two-run homers off LSU starter Michael Reed. Third baseman Chase Lyles and second baseman Justin Martinez both recorded their fourth homers of the season as Northwestern State took an early 4-0 lead.

The Tigers cut the lead to 4-2 in the third after three-straight doubles by Leon Landry, Nola and Dean. The double by Nola was his fourth extra-base hit in his previous nine at-bats. Dean’s double was the 61st of his career and moved him into a tie with Todd Walker for fourth place on LSU’s all-time career list.

LSU made the score 4-3 in the fourth when Matt Gaudet scored from third on a wild pitch by reliever Jacob Williford. The next batter, Nola, smashed his second RBI of the game on a sacrifice fly to left field to knot the game at 4-4.

LSU reliever Ben Alsup entered the game in the first inning for Reed and held the Demons scoreless through the next four frames, allowing only two hits.

“Ben Alsup was the real story of this game,” Mainieri said. “He came in and stopped Northwestern after they scored the four early runs. He gave us a chance to get back in the game with an outstanding effort.”

The Tigers broke the 4-4 tie in the sixth inning on an infield single by Nola, giving LSU a 5-4 advantage and its first lead of the game. Two batters later, Micah Gibbs lifted a sacrifice fly to right, scoring Landry from third and giving the Tigers a 6-4 lead.

Rittiner was credited with the win as he worked two innings and allowed two runs (one earned) on four hits with no walks and one strikeout.

NSU reliever Heath Hennigan (1-2) was charged with the loss as he surrendered four runs – just one earned – on five hits in 3.1 innings with no walks and four strikeouts.