No. 16 Softball Falls to McNeese State 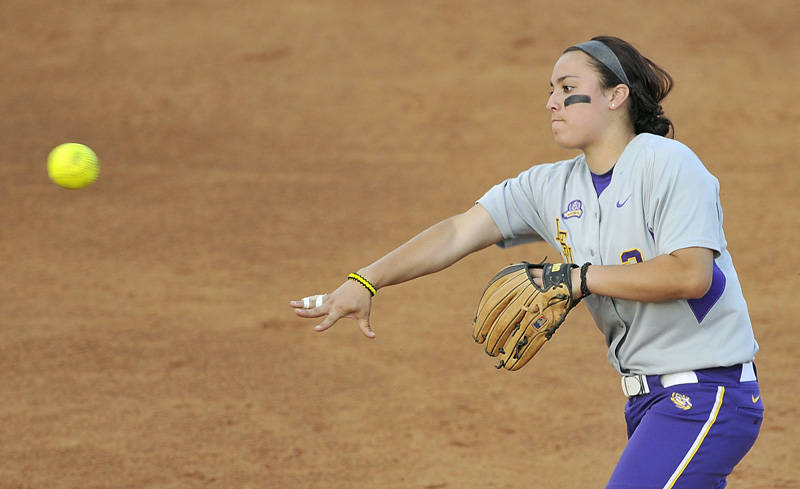 BATON ROUGE – The No. 16 LSU softball had its 25-game home winning streak come to a close as McNeese State rode the right arm of Meagan Bond to a four-hit shutout and 3-0 decision Wednesday at Tiger Park.

LSU (36-10) dropped its first mid-week contest to end a stretch of 13 straight wins to open the new Tiger Park, while McNeese State (25-23) notched its first win in 14 attempts in Baton Rouge.

“We were a little bit too cool for school,” head coach Yvette Girouard said. “We can’t win if we can’t touch the plate, and that’s the nemesis of our team right now. Unless we start swinging the bats like we’re capable of doing, we’re not going to go too far. We have to get everybody’s attention here.”

McNeese State grabbed a 2-0 advantage behind a Molly Guidry two-run home run in the first inning. Bond limited the Tigers to a quartet of singles and recorded three strikeouts against one walk en route to her 15th win of the season. LSU left single runners on-base during the second, fourth, fifth, sixth and seventh innings

The Cowgirls tacked on a Whitney Corbello RBI-single in the sixth inning for the final margin of 3-0. Brittany Mack was tagged with the loss and surrendered three runs on four hits over six-plus frames to fall to 8-3 on the season.

“We just struggled, couldn’t get into our groove and find it,” outfielder Rachel Mitchell said. “Every team has bad days. That’s just one of ours. They’re a good team, but we’re always so focused and ready to play and win. It definitely shocked me that we weren’t able to do that.”

LSU returns to SEC action with a weekend trip to Kentucky. Saturday’s doubleheader is scheduled for a 12 p.m. CT start followed by a Sunday single-game at 11 a.m. CT.

All three games will be broadcasted live on ESPN 104.5 and The X 104.9 FM in the Baton Rouge area with Patrick Wright and Matt Dunaway set to call the action. Live stats also are available in the Geaux Zone on LSUsports.net along with in-game updates on http://twitter.com/lsu_softball.

On her thoughts on the game…
“We were a little bit too cool for school. We can’t win if we can’t touch the plate, and that’s the nemesis of our team right now. Unless we start swinging the bats like we’re capable of doing, we’re not going to go too far. We have to get everybody’s attention here.”

On hitting McNeese State pitcher Meagan Bond pretty well last time they played…
“I just think we are so unfocused sometimes. Everybody tries to win the game with one swing instead of just having a disciplined at-bat. We didn’t have very good swings on it. It was just a bad night.”

On if this was a trap game…
“I don’t know. It’s tough to tell. We just did not have it tonight, and we have to find it quick. “I was concerned; I’ve been concerned all year that we have to score more runs than what we do. We just have to find out the answer and swing the bat like we are capable of swinging.”

On the loss…
“We weren’t doing anything special or different. We just struggled and could never get in our groove and find it. Every team has bad days. That’s just one of ours.”

On if this was a trap game…
“Most definitely, they’re a good team, but we are always so focused and ready to play and win that it definitely shocked me that we weren’t able to.”

On losing their first midweek game at the new Tiger Park and if that means a lot to the team…
“Yes, of course. It’s our fans who come out and support us. We don’t want to disappoint them. It was a bad game. We hate to disappoint our fans.”

On getting the bat on the ball well but hitting it at defenders…
“Yes, a lot of people had really good hit balls, and they were just hit right at people. Luck wasn’t on our side tonight.”