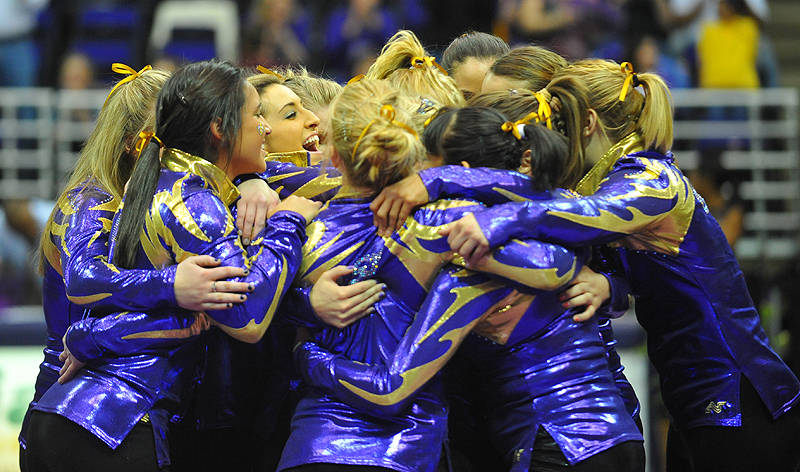 GAINESVILLE, Fla. – The ninth-seeded LSU gymnastics team will compete for a third straight appearance in the NCAA Super Six when the Tigers take part in the opening session of the NCAA Championships at noon CT Thursday in Florida’s Stephen C. O’Connell Center.

Live audio will be available in the Geaux Zone on LSUsports.net with Mike Smith and Ashleigh Clare-Kearney calling the action, and fans can also find links to live video and stats on LSUsports.net.

LSU (15-8-1) finished second at the NCAA North East Regional at Penn State to advance to its ninth straight NCAA Championship, and the Tigers will need to finish third or higher in the preliminary round of the championships in order to compete in the Super Six.

“We have to hit and do it well,” head coach D-D Breaux said. “We have to be at our best, and we can’t come in and make mistakes.”

The Tigers will rely on the experience and leadership of their four senior All-Americans who have been part of the two Super Six teams at LSU.

LSU competed in the first session of the championships in both 2008 and 2009, and the Tigers advanced to the Super Six both times with third-place finishes.

LSU will open the meet on a bye and rotate to floor, vault, another bye, bars and beam to close out the meet.

“We are ready to go because any time you make this cut of the final 12 teams it is exciting. We just need to up our game and take it to the next level.”

Susan Jackson will also chase after an all-around title which would be her school-record 11th title of the season, and it would also mark LSU’s first national all-around champion.

Although she suffered a fall on floor to open the regional, Jackson rebounded with 9.95’s on vault and bars and a 9.90 on beam to pace the Tigers.

Summer Hubbard has been steady all season, and she carries momentum into the meet after posting a 9.875 on bars and 9.825’s on beam and floor at the regional.

Seniors Sabrina Franceschelli and Kayla Rogers have been solid for the Tigers, including Rogers’ 9.875 on vault at the regional and Franceschelli’s 9.775 average on floor that is second on the team.

LSU will also need solid scores from the other spots in the lineup in order to advance, and junior Samantha Engle has continued to step up on bars, beam and floor.

Engle averages more than a 9.80 on bars, and she has posted three scores of 9.90 or higher on beam including two team-leading 9.925’s.

The Tigers will count on sophomores Gloria Johnson and Ashley Lee each to provide solid scores on two events. Johnson earned Second Team All-SEC honors with a 9.875 on vault, and she followed that with 9.80’s on vault and beam at the regional. Lee scored a 9.825 on vault and 9.75 on floor at the regional.

Freshman Ericka Garcia will contribute on vault, bars and beam, and Shelby Prunty will compete on bars and beam. Garcia has not scored lower than a 9.80 all season on vault, and Prunty has provided three straight scores of 9.80 in the leadoff spot on beam.

Should LSU advance to the Super Six, competition will begin Friday at 5 p.m. in the O’Connell Center, and the individual event finals will take place Saturday at 5 p.m.