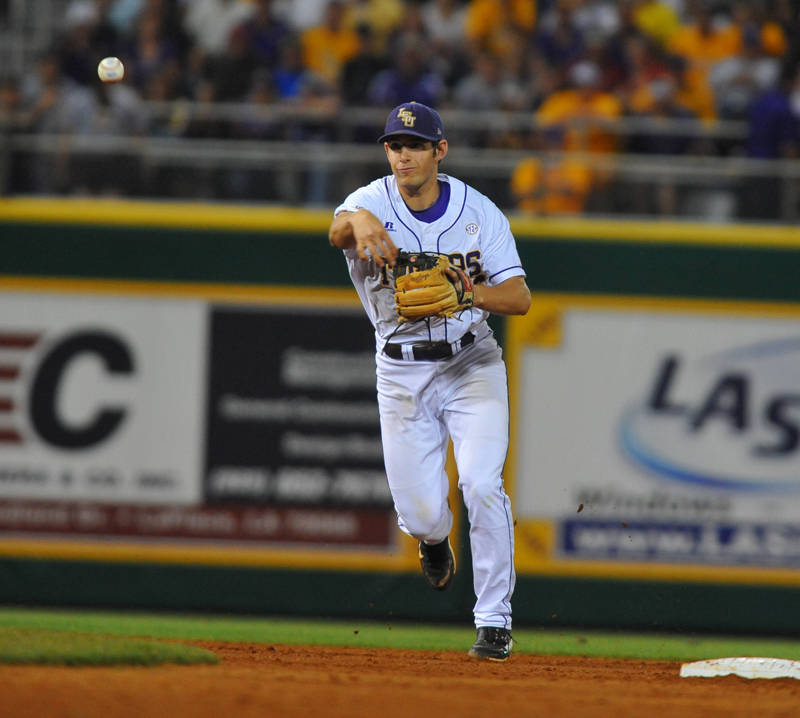 SHREVEPORT, La. — Shortstop Austin Nola was a single shy of hitting for the cycle, and the fifth-ranked Tigers pounded 15 hits to top No. 30 Northwestern State, 14-3, Tuesday night at Fair Grounds Field.

The Tigers (31-6) will be back in action Wednesday when they play host to Northwestern State (25-11) in Alex Box Stadium at 6:30 p.m., as the two teams will meet for the second time in two days.

Nola led the Tigers offensively with a double in the first, homer in the second and triple in the seventh. The Baton Rouge native also scored twice and drove in a pair of runs. Also helping LSU offensively were third baseman Wet Delatte, who went 3-for-5 with an RBI and a run scored, and designated hitter Micah Gibbs, who drove in three runs.

“I thought we played a great ball game tonight, and I was proud of the way we competed against a very good team,” said LSU coach Paul Mainieri. “Daniel Bradshaw gave us an outstanding effort  on the mound, and we complemented that with a strong offensive performance. Northwestern State has an excellent club, so we’ll need to be at our best again tomorrow night when we meet in Alex Box Stadium.”

The Tigers got on the board with the bases loaded and no outs in the top of the second when Leon Landry hit into a double play, but was able to plate Tyler Hanover from third to give LSU a 1-0 lead.

The next batter, Nola, blasted a two-run homer over the wall in right to put the Tigers ahead 3-0. Nola’s dinger was his third of the season and his third in the last four games. Nola doubled off the top of the centerfield wall earlier in the first inning.

LSU extended its lead to 4-0 in the third when Hanover ripped an RBI single through the right side to score Matt Gaudet from second. Hanover, who finished 2-for-3 with three runs scored, advanced to second on the throw to the plate. The next batter, Delatte, doubled to right field, scoring Hanover and putting LSU ahead 5-0.

The Demons got on the board in the bottom of the frame when third baseman Chase Lyles hammered a sacrifice fly to deep center to score catcher Aaron Munoz from third making the score 5-1.

The Tigers added another run in the fourth on an RBI single by Grant Dozar, extending LSU’s lead to 6-1. In the fifth, a sacrifice fly by Johnny Dishon plated Hanover to increase the Tigers’ advantage to 7-1.

Later in the inning, Gibbs ripped a three-run double with the bases loaded to give LSU a 10-1 lead.

In the sixth, the Demons made the score 10-2 on an RBI single by first baseman Adam Roy. After giving up a single to Roy and walking Justin Martinez, Bradshaw left the game, giving way to Shreveport native Chris Cotton with the bases loaded and no one out.

Cotton got Colin Bear to pop out foul and then forced Munoz to hit into a 6-4-3 double play to get out of the sixth inning unscathed and end the Demons’ rally. Cotton did not allow a base runner in the two innings he pitched.

LSU continued scoring in the seventh as Nola led off the inning with a triple, his third hit of the game, and scored when Blake Dean lifted a sac fly RBI to right, making the score 11-2. Three runs scored on an error by left fielder Eric DeBlanc later in the inning to make the score 14-2.