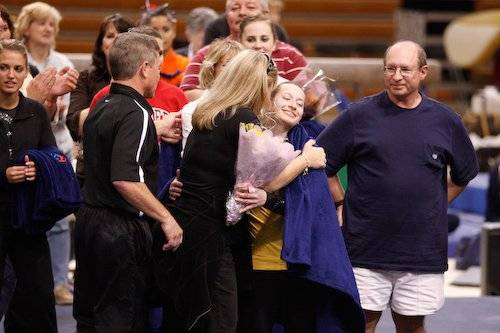 A native of Clearwater, Fla., Zoldos is a level 10 gymnast and is coached by Jeff LaFleur at LaFleur’s Tampa Gymnastics in Tampa, Fla.

“Sarah is an extraordinary student and is very bright,” Breaux said. “She has been at LaFleur’s gym for a couple years, and Jeff has done a remarkable job with her in a short amount of time.

“We are looking forward to her coming to LSU, growing and getting better. She is one of those kids you recruit and project that they will make improvements. We have built our program around those kinds of kids, so I think she will do really well here.”

Recently, Zoldos won the vault and bars titles at the 2010 Daytona Beach Invite, and she followed that by becoming the 2010 Florida state all-around champion with a 38.075 all-around mark. She also claimed the state bars title at the meet.

Zoldos finished fourth in the all-around at the 2010 regional, and she captured the bars title to earn a spot on the Region 8 national team.

“Sarah has improved this year in her gymnastics,” said Philip Ogletree, assistant coach and recruiting coordinator. “Bars is her best event. She already has everything she needs at the collegiate level in that event with a big dismount.

“She is also a very strong vaulter, so she has good power and good bars. We look for her to come in and make the lineup in at least a couple events.”

The daughter of Steve and Joan Zoldos, Sarah attends Countryside High School in Clearwater, and she plans to major in biological sciences at LSU with a concentration in pre-med.

Zoldos will join Maliah Mathis, Sarie Morrison, Sidney Sanabria-Robles and Gabby Swart as part of the freshmen class for the Tigers in 2011.