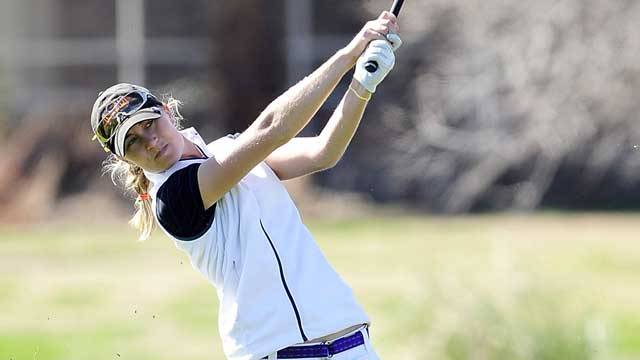 TUSCALOOSA, Ala. – The 17th-ranked Lady Tiger golf team shot an eight-over par 292 on the final day to finish in sixth place in the SEC Women’s Golf Championships which concluded Sunday afternoon at the NorthRiver Yacht Club.

LSU finished at 14-over 866, the lowest aggregate score LSU has shot in the SEC Tournament and it marks the third straight year that LSU has finished in the upper division of the tournament.

Junior Megan McChrystal shot a three-under par 32 coming home in the final nine holes of the round to shoot 69 and finished in a group tied for 10th place in the individual competition.

McChrystal birdied the par five 10th and scored birdies on the par 4 15th and 16th holes and that enabled her to finish the tournament at even par 213 over the par 71 layout. McChrystal had rounds of 72-72-69. It was McChrystal’s best finish in the tournament after finishing tied for 20th and tied for 17th in her first two years.

The 17th-ranked Lady Tigers shot a round similar to Saturday’s six-over 290 as the Lady Tigers got off to a start they couldn’t overcome on Sunday.

“We got off to a terrible start,” said LSU Coach Karen Bahnsen. “But there is a positive in that they played hard the rest of the way. Did they quit? No. Did they try? Yes. That’s all you can do. We just didn’t have it (Sunday). I hate it for them. It’s the conference championship. We are just going to try and build on this and be prepared for the regionals. If this doesn’t motivate them, I don’t know what will. We’ve got to play better. We can’t have these starts like this. They’ve dug their way out of it, but not enough. It’s disappointing for them, but I know they tried as hard as they could and that’s all I can ask of them as a coach.”

The Tigers also got a nice round of 75 from freshman Mary Michael Maggio which was her best round since returning from between semester shoulder surgery. Maggio bogeyed four of the first six holes and then played even par the rest of the way to get what would prove to be a counting round home for LSU.

Tessa Teachman, still struggling from the effects of allergies and the heavy pollen in the area, and Amalie Valle, both came in at six-over 77. Valle also finished in the group tied at 20th at 218 and Teachman also had a top 25 finish in 24th at 219.

Alabama won its first SEC women’s golf championship holding off a charge from Vanderbilt. The Tide shot four-under 848 for the title, with Vandy coming in at 852, even par. Arkansas was seven more shots back in third at 859, while Georgia took fourth at 860 and Auburn fifth at 861 ahead of LSU. One shot behind LSU in seventh was South Carolina at 867.

The individual competition came down to a playoff between Vandy’s Martina Alex and Tennessee’s Erica Popson at five-under 208. Popson shot 68 in the final round to get into the playoff, while Alex shot a one-over 72. Alex won the sudden death playoff on the second extra hole.

LSU now waits to see which of three regional NCAA events it is sent to and that announcement is expected on Monday, April 26.