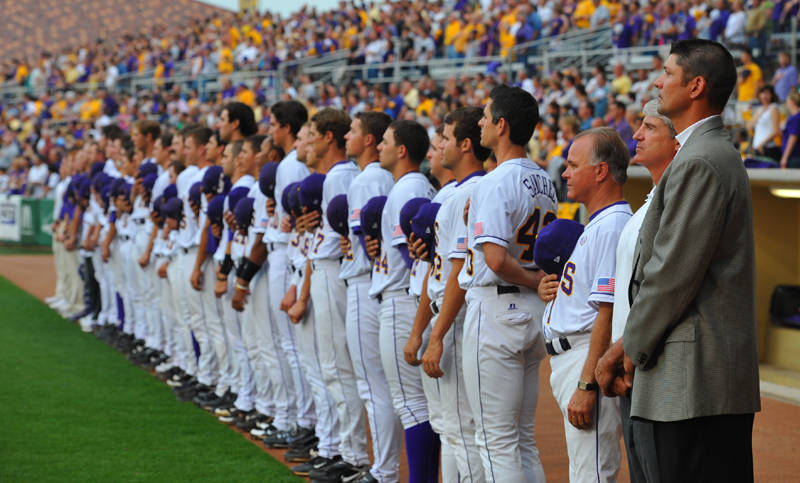 BATON ROUGE – Three solo homers in the third inning, including back-to-back dingers by shortstop Austin Nola and first baseman Blake Dean, highlighted No. 6 LSU’s 9-7 win over Alabama to clinch the series in front of a record crowd of 10,019 Saturday night in Alex Box Stadium.

The series finale between LSU and Alabama is slated for 1 p.m., Sunday in Alex Box Stadium. Sophomore left-hander Chris Matulis (5-1) will make the start for LSU and will face Alabama right-hander Jimmy Nelson (4-1).

“I thought we played a very good ball game tonight,” said LSU coach Paul Mainieri. “We had some great at-bats early in the game that allowed us to take the lead, and we knew we would have to build on it we know what kind of  Alabama has. It was a fantastic night for LSU baseball in front of a record crowd.”

The Tigers were led offensively by Dean’s three RBI, as well as Micah Gibbs‘ 3-for-5 performance. Also leading the LSU charge was left fielder Johnny Dishon, who went 2-for-3 with a homer, a triple and three runs scored.

LSU starter Joey Bourgeois (4-1) earned the victory after allowing only four earned runs in 5.1 innings with no walks and seven strikeouts. The loss was charged to Alabama starter Tyler White (3-3) as the lefty allowed five runs on six hits in 1.1 innings.

“Joey really did a good job tonight,” Mainieri said. “He didn’t walk anybody and he had great stuff throughout his outing. He gave us exactly the effort that we needed to win.”

For the second consecutive time in the series, LSU took a 1-0 lead in the first inning. After Nola and Gibbs slapped singles up the middle, Leon Landry roped a single to center plating Nola from second. Alabama starter Tyler White then walked Gaudet with the bases loaded to make the score 2-0.

Alabama got on the board in the top of the third when third baseman Jake Smith crushed a solo homer off Bourgeois to make the score 5-1. Smith’s third homer of the season was his fifth career home run against LSU. The Crimson Tide made the score 5-2 after three-consecutive singles in the inning before Bourgeois struck out Clay Jones to end the Alabama threat.

LSU added two more runs in the fourth after Dishon led off the inning with a triple and scored on an RBI double by Mikie Mahtook that made the score 6-2. After stealing third, Mahtook scored on an infield groundout by Dean to give LSU a 7-2 advantage.

In the top of the fifth, Alabama catcher Cody Trotter lifted a solo homer to left-center fielder to cut the deficit to 7-3. The homer was Trotter’s first home run of the season.

Alabama added another run in the sixth on an RBI single by designated hitter David Kindred off LSU reliever Austin Ross to make the score 7-4. Ross fanned the final two batters of the inning to quiet the Alabama rally with two runners on base.

LSU went up 9-4 in the bottom of the frame after back-to-back sac fly RBI by Nola and Dean. Dishon scored on Nola’s pop to deep right field, and Mahtook, who doubled earlier in the inning, scored on a shallow fly to left by Dean.

With the go-ahead run on first and the bases loaded, Matty Ott entered the game in relief and forced Kelton to ground out to the mound to end the Alabama threat.

The sophomore right-hander came back in the ninth and retired the Crimson Tide in order to earn his 11th save of the season.