Loupe Near the Top Entering Final Round at SEC's 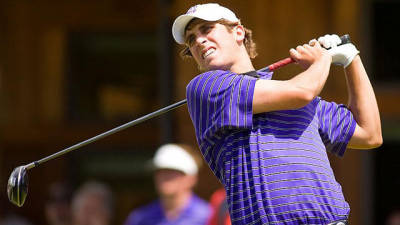 ST. SIMONS ISLAND, Ga. – After firing a team-low 2-under par 68 in Saturday’s second round, junior All-America hopeful Andrew Loupe has put himself in position to compete for individual medalist honors at the 2010 SEC Men’s Golf Championships being held at the Seaside Course at Sea Island Golf Club.

Loupe, who opened play on Saturday in a tie for 14th place on the leaderboard following an even-par 70 in the first round, catapulted himself into a tie for fifth place with a 36-hole score of 2-under 138.

Loupe helped the Tigers move up one spot in the team standings into sole possession of fifth place overall with a two-round team total of 11-over 571, including an 8-over 288 during Saturday’s competition.

With a strong performance in Sunday’s final round, the Tigers have the opportunity to improve upon their fourth-place tie in the final team standings at the SEC Men’s Golf Championships a season ago.

The defending champion Georgia Bulldogs erased a six-shot deficit to first-round leader Arkansas and are now four shots clear of the Razorbacks in the race for the team title. Georgia fired a team score of 3-under par 277 on Saturday to finish the afternoon at even-par 560 for the championship. The Razorbacks follow four shots back in second place overall at 4-over 564, including a 6-over 286 in the second round.

The Tennessee Volunteers are currently in third place at 8-over 568, while the South Carolina Gamecocks follow closely behind in fourth place with a 36-hole team score of 10-over 570.

With his performance, Loupe has put himself in position to compete for the individual title as he trails by only two shots on the leaderboard. South Carolina’s George Bryan IV and Alabama’s Hunter Hamrick are currently tied for the top spot with matching 36-hole scores of 4-under par 136.

While never finishing in the Top 20 at the SEC Men’s Golf Championships, Loupe has the opportunity to become the first LSU golfer to take the title as SEC medalist since the great David Toms back in 1987.

He also has the chance to become the second LSU Tiger in as many years to earn a top-five finish overall as fellow junior and teammate John Peterson placed third in the final standings a year ago.

Peterson followed his even-par 70 in the first round with a 4-over 74 in the second round while wrapping up Saturday’s action in a tie for 24th place at 4-over 144. Sophomores Josh Jones and Austin Gutgsell each finished the second round in a tie for 42nd place overall at 7-over 147 as Jones carded a 5-over par 75 and Gutgsell added a 6-over par 76 for the Tigers on the afternoon.

Sophomore Sang Yi showed the most dramatic improvement of any golfer in the field on Saturday with a 1-over 71 for the second-lowest score on the team in the second round. Yi only managed a 12-over 82 for the first round as he now sits in a tie for 55th place at 13-over 153 for the championship.

The Tigers are paired with Auburn and South Carolina in Sunday’s final round of the 2010 SEC Men’s Golf Championships and will tee off from the front nine beginning at 7 a.m. CT. Live scoring of the third and final round can be found online at www.golfstat.com.