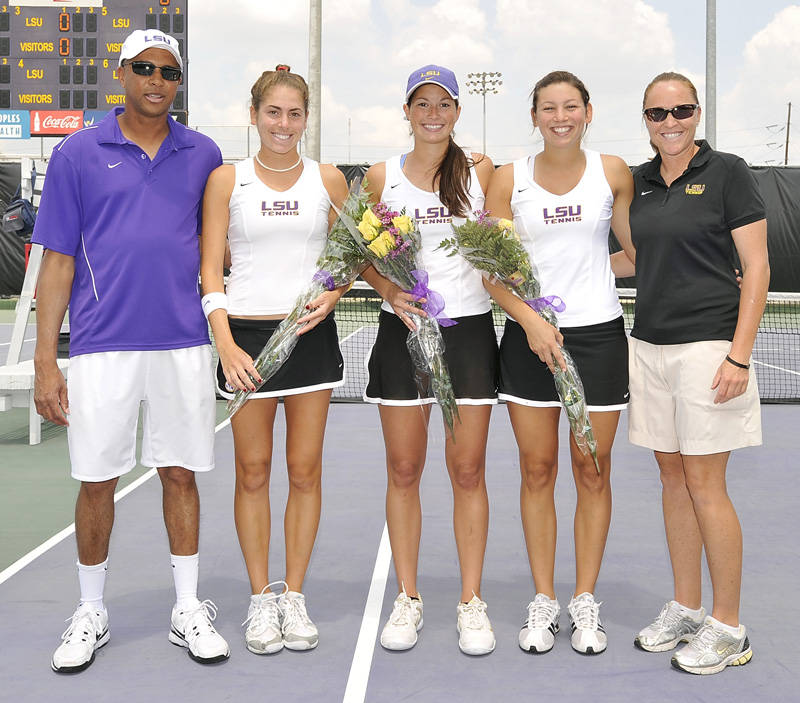 BATON ROUGE – The LSU women’s tennis team dropped a tough doubles point and failed to rally in singles as No. 23 Arkansas claimed a 5-2 win over the Lady Tigers on Senior Day Saturday at W.T. “Dub” Robinson Stadium.

“We had some opportunities and didn’t capitalize,” said head coach Tony Minnis. “We got into the third set and couldn’t pull it off, but hats off to Arkansas.”

Prior to the match, seniors Nicole Kantor, Sloane Mathis, and Hannah Robinson were honored for their time at LSU, which included three NCAA postseason appearances and an SEC Western Division championship.

The loss marked the first time since 1984 that Arkansas defeated the Lady Tigers in Baton Rouge, a drought that spanned 10 matches. It was also LSU’s first Senior Day loss since the 2004 regular season finale against Tulane.

The Lady Tigers opened up doubles play with a victory as 89th-ranked Whitney Wolf and Keri Frankenberger cruised to their fourth consecutive doubles win, 8-4, over Arkansas’ Kate Lukomskaya and Kelsey Sundaram.

However, the Tigers were unable to climb back from early deficits on courts two and three. Playing on court two, Kaitlin Burns and Hannah Robinson took four straight games to take the lead after falling behind 3-0. Arkansas responded by taking the last five games of the match to close out an 8-4 victory and level the doubles tally at 1-1.

The Razorbacks clinched the doubles point on court three when Claudine Paulson and Stephanie Roy built up a 4-1 lead against Nicole Kantor and Ebie Wilson en route to an 8-4 win that gave Arkansas a 1-0 lead in the overall match.

In singles play, Arkansas stretched its lead to 2-0 when Valentina Starkova defeated Hannah Robinson on court six in straight sets, 6-2, 6-2.

Playing on court two, freshman Kaitlin Burns grinded out a first set tiebreak win against Kate Lukomskaya before dominating the second set as she took a 7-6 (7-5), 6-0 win that brought the score to 2-1.

After dropping a back-and-forth opening set, senior Nicole Kantor was unable to extend the match as she fell in straight sets, 6-4, 6-2, to Emily Carbone.

Freshman Keri Frankenberger continued her late-season dominating form with an efficient 6-3, 6-3, victory over Stephanie Roy that gave her nine wins in her last 11 matches.

With the Razorbacks still one point shy of clinching the match, both Whitney Wolf and Ebie Wilson rallied back from 6-2 first-set losses to win the second set.

Unfortunately, neither was able to sustain the momentum that propelled them into the deciding set.

Wolf traded breaks with 43rd-ranked Anouk Tigu but failed to draw any closer as Tigu emerged with a 6-2, 4-6, 6-1 triumph that ended the Lady Tigers’ comeback bid.

Wilson also struggled after an impressive second set and ultimately lost to fellow freshman Kelsey Sundaram by a 6-2, 3-6, 6-0 margin.

The loss still contained good signs for the future, however. Both LSU points were won by freshmen Burns and Frankenberger, who came into the match tied for the team-best dual record. They end the regular season with matching 13-8 records.

LSU ends the regular season with a 9-14 overall record and 4-7 mark in conference play.

Next up for the Lady Tigers is the SEC Tournament, which begins April 22. LSU goes into the four-day event as the No. 8 seed and will face either Auburn or Alabama in the first round.