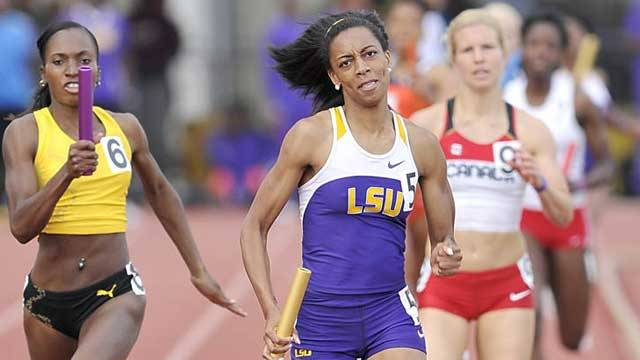 BATON ROUGE – It didn’t take long for the championship finals of this year’s LSU Alumni Gold to heat up as senior All-Americans LaTavia Thomas and Richard Jones took their mark in the very first open event on Saturday afternoon and each ran the fastest time in the NCAA this season in the 800-meter run.

The Tigers and Lady Tigers were impressive during Saturday’s action at the Bernie Moore Track Stadium as they combined for 10 event wins and nine Top 10 performances in the NCAA this season.

“This was a great way for us to follow up the team banquet last night with a really great meet today,” said LSU head coach Dennis Shaver. “I thought our kids competed well from the start and we came away with a number of outstanding performances. Our 800-meter runners really stood out today, but there were a lot of things we were able to get done in all of the event areas. I’ve very pleased with our effort.

After running 2 minutes, 5.11 seconds in her first 800-meter race of the 2010 outdoor season last weekend in Miami, Thomas dropped her time by nearly four full seconds on Saturday afternoon as she took second place in the race with a lifetime personal record of 2:01.40.

Thomas improved upon her previous PR of 2:01.56 set in the national final in 2009 at the NCAA Outdoor Championships, where she won her fourth career All-America honor in the two-lap race.

Three other Lady Tigers also finished the race ranked among the NCAA’s top six performers in the event. Senior Kayann Thompson finished in 2:03.54 to rank No. 2 in the country, while junior Brittany Hall set a time of 2:03.76 to rank No. 3 and freshman Charlene Lipsey ran 2:05.89 to rank No. 6 in the NCAA.

It took a record-setting performance by Neisha Bernard-Thomas to beat Thomas for the 800-meter title as the former Lady Tiger national champion finished the race in 2:00.77 to shatter the 26-year-old Bernie Moore Track Stadium facility record of 2:01.15 set by Tennessee great Joetta Clark back in 1984.

If that were not enough, Hall, Thompson and Thomas teamed with sophomore Cassandra Tate for the win in the 4×400-meter relay with a time of 3:32.51 in the final women’s event of the meet.

The men’s 800-meter final proved to be just as electric as Jones crossed the finish line with the top time in the NCAA this season at 1:46.90 to take the event championship.

Jones, who picked up his second career All-America selection in the 800 meters with a fourth-place finish at the NCAA Indoor Championships, cut more than one second off his outdoor opening time of 1:47.95 at the Miami Elite Invitational a week ago. He also improved his PR by two tenths of a second after running 1:47.10 in the final at the NCAA Outdoor Championships meet a year ago.

Fellow senior Jamaal James also cemented his place among the nation’s fastest half milers by running the sixth-fastest time in the NCAA at 1:48.34 to finish runner-up to Jones winning time of 1:46.90.

Like his female counterparts, Jones ran the third leg on LSU’s 4×400-meter relay team that was runner-up in an exciting end to this year’s LSU Alumni Gold. He teamed with freshman Caleb Williams, sophomore Ade Alleyne-Forte and senior Armanti Hayes to run a time of 3:05.84.

“I wasn’t really that surprised with how I ran because I’ve been training hard. I’m really confident,” Jones said. “I got out there today and saw that there wasn’t much wind, so I wanted to see what I could do. I knew I could run fast after I saw the women’s race before ours. Coach (Mark) Elliott and I talk a lot about how I’m progressing, and I know I can keep dropping my times from here.”

The Lady Tigers kicked off the championship finals at this year’s LSU Alumni Gold at 2:45 p.m. CT with a win in the 4×100-meter relay. Senior Samantha Henry, freshman Kimberlyn Duncan, freshman Takeia Pinckney and junior Kenyanna Wilson clocked LSU’s second-fastest time of the season at 43.54.

Both Duncan and Wilson soon followed with two of the leading performances in the NCAA this season in the 200-meter dash. Duncan was impressive in her outdoor debut in the event as she clocked the NCAA’s No. 3-ranked time under all conditions with a slightly wind-aided time of 22.96 (+2.4) to win first place.

While running in a different heat in the 200 meters, Wilson set a new wind-legal personal best with a time of 23.24 to move into the No. 7 spot on the NCAA performance list this spring.

Not only did she team with Duncan and Wilson to win the sprint relay title, but Henry also took home the gold in the 100-meter dash by running a wind-legal time of 11.34.

Sophomore Michael Lauro also catapulted himself into the NCAA’s Top 10 during Saturday’s action. He finished runner-up to teammate Walter Henning (233-1) in the men’s hammer throw competition with the No. 10-ranked throw in the NCAA and No. 3-ranked throw all-time at LSU at of 217 feet, 8 inches. Lauro shattered his previous PR by more than three feet as he entered the weekend with a best of 214-4.

Tate nearly joined the list of LSU athletes earning a Top 10 performance in the NCAA with her victory in the 400-meter hurdles. In just her second appearance in the event as a Lady Tiger, Tate surged through the tape with a personal best and the 12th-fastest time in the country at 58.08.

Tate’s time is a more than two-second improvement from her 1:00.12 clocking a week ago when she lined up in the event for the first time. It also ranks No. 6 on LSU’s all-time performance list in the event.

Junior pole vaulter Marcus McGehee led a trio of other event winners on Saturday as he cleared 17 feet in his specialty for the third week in a row, setting a new lifetime PR of 17-1 ½ to take the title.

In addition, junior Melissa Ogbourne posted a top leap of 41-9 ¾ into a strong headwind of 1.3 meters per second to win the women’s invitational triple jump, while Tiger sophomore Earnest Green set a new wind legal personal best of 48-11 to win the B section of the men’s triple jump.

And Bernard-Thomas was not the only former Lady Tiger great to set a new Bernie Moore Track Stadium facility record as Lolo Jones broke her own record in the 100-meter hurdles with a wind-legal time of 12.71 in her first hurdle race of the outdoor season after winning her second-straight World Indoor crown.

“We had some tremendous performances today that will put us in a position to compete in the postseason. We only have one more opportunity to compete before we turn our attention to the championship meets,” Shaver said. “The regular season is over just that quick. Our kids understand they must take advantage of every opportunity they have to get it done. That will be the focus for us again next weekend.”

The Tigers and Lady Tigers will wrap up the regular season next weekend as they make their return to historic Franklin Field on the campus of the University of Pennsylvania to compete in the 116th running of the Penn Relays scheduled for April 22-24 in Philadelphia.