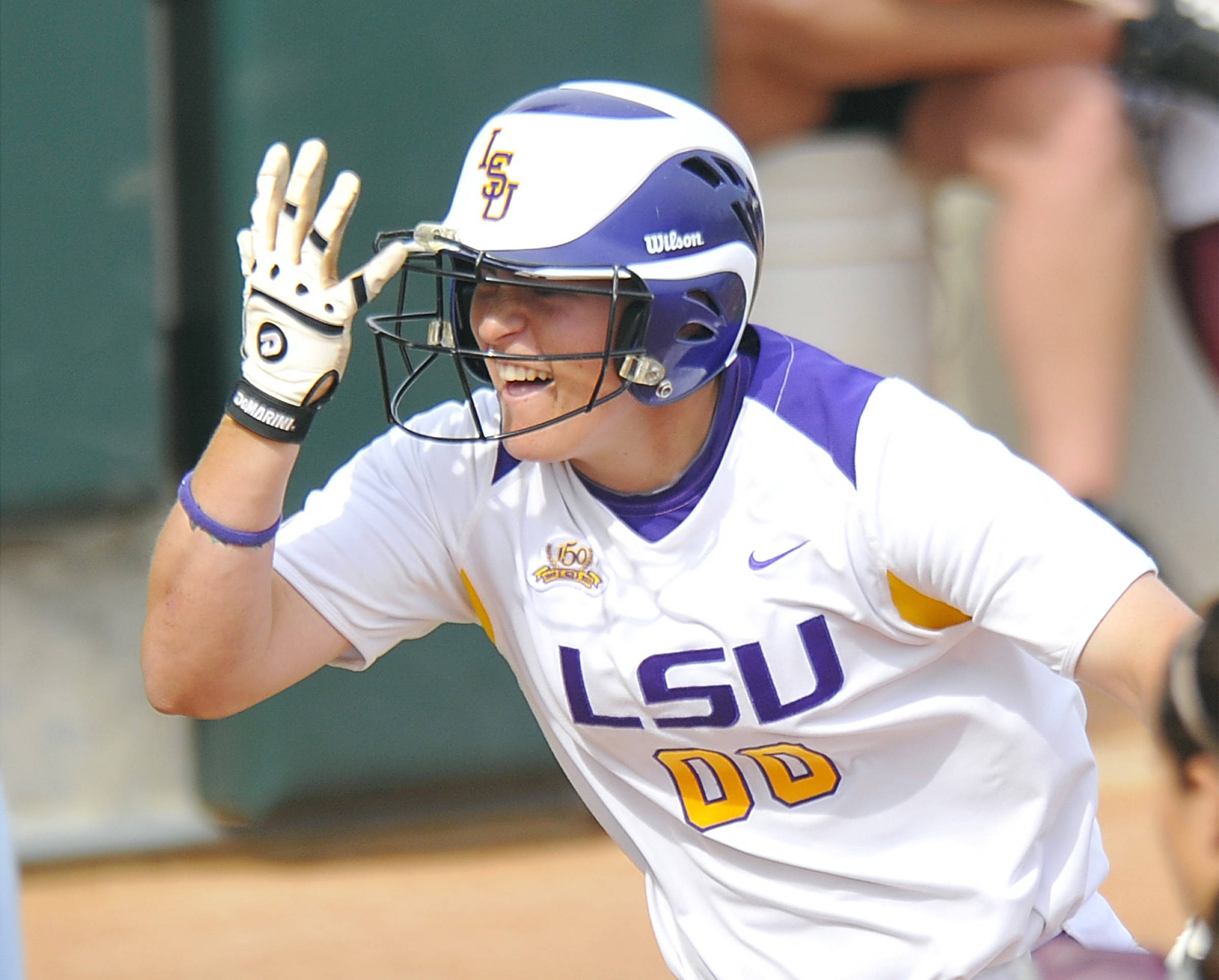 BATON ROUGE – Ashley Langoni capped a day of heroics and belted a walkoff RBI-double with two outs in the tenth inning to lift the No. 15 LSU softball team to a 3-2 game two victory Saturday over Arkansas as a season-best 1,738 fans gathered at Tiger Park. The crowd also marked the third-largest in program history.

With the score tied 2-2 during the fifth inning of the first game, Langoni also deposited a 2-0 offering onto the left field berm for her team-leading ninth dinger and handed the Tigers a 4-2 triumph. Langoni has provided 11 RBIs during her last six games.

LSU (35-9, 13-5 SEC) extended its home winning streak to 24 consecutive games and remained one game behind Alabama in the SEC Western Division race. With the victories, the Tigers also eclipsed their 34-win total from the 2009 campaign.

“I thought she [Langoni] hit the ball pretty hard and luckily she came through for us,” head coach Yvette Girouard said. “They never gave up in the dugout. Everything was very positive. The seniors want to make this a great weekend so they were pretty vocal.”

Jessica Mouse dropped a picture-perfect bunt single down the third base line to ignite the Tigers with one out in the 10th inning. After Rachel Mitchell reached on a fielder’s choice, Kirsten Shortridge kept the frame alive with an infield single.

Langoni ripped a 1-0 pitch down the left line and over the head of Razorback left fielder Becca Carden to plate Mitchell and secure the dramatic 3-2 win. Her walkoff hit was LSU’s third of the season as the Tigers are now 3-0 in extra inning affairs.

“I was joyful, grateful, relieved and all sorts of other emotions,” Mitchell said. “I’m glad we could pull together and finish strong as a team. Langoni just has so much heart and drive. You know she wants it so bad. When the time is right, she will step up and be the person that gets it done.”

Rachele Fico was dominant over her 7.2 frames of five-hit relief and moved to 14-4 on the season. She racked up nine strikeouts against one walk and sat down the final 12 batters she faced as only one ball left the infield during that impressive stretch.

Fico entered the game with the bases loaded and one out in the third inning. She dug deep and recorded back-to-back strikeouts to keep Arkansas ahead by only a 2-0 margin.

The Razorbacks (24-20, 8-10 SEC) scored their two runs on a Layne McGuirt RBI-double aided by a LSU fielding error off of starter Brittany Mack during the first inning.

“I think Rachele is doing an awesome job as a freshman,” Langoni said. “Our coaches always tell us not to play as freshmen, to come in and play like you have been here before. That is what she is doing.”

LSU rallied to manufacture runs in the fourth and fifth innings. The Tigers took advantage of a pair of leadoff singles from Shortridge and Ashley Applegate.

Anissa Young scored Shortridge on a sacrifice fly, while Mitchell smashed a two-out, RBI-single through the middle to draw the Tigers even at 2-2 after five frames.

Cody Trahan received the game one win and went the distance to improve to 10-2. She limited the Razorbacks to a pair of runs on three hits. The Little Cypress, Texas native tallied four strikeouts and allowed two walks on an economical 98 pitches.

LSU raced out to a 2-0 advantage in the first inning as Mitchell coaxed a walk and moved to second on a Shortridge sacrifice bunt. Langoni kickstarted her 2-for-3 performance with a RBI-single and Juliana Santos connected for a RBI-single of her own into the left centerfield gap.

The Razorbacks charged back behind solo homers from Miranda Dixon and Leslie Dixon during the second and fifth innings to tie the score at 2-2.

Trahan regrouped to retire eight of the final 10 batters she faced after the Dixon homer.

Sunday’s series finale is on-tap for a 1 p.m. first pitch. LSU will honor its senior class of Mitchell, Shortridge and Trahan following the game.

“It’s exciting but also kind of sad,” Mitchell said. “We’re all going to come out here and play our best. Arkansas is a team that doesn’t quit so we’re going to have to be on our A-game to have a great day.”

The contest will be broadcasted live on ESPN 104.5 and The X 104.9 FM in the Baton Rouge area with Patrick Wright set to call the action. Live video and stats also are available in the Geaux Zone on LSUsports.net along with in-game updates via www.twitter.com/lsu_softball.

On the game winning hit to get the win …
“I thought she [Langoni] hit the ball pretty hard and luckily she came through for us. Shortridge kept the inning alive for us, but we have to hit a little bit better. We pitched well, but we need to hit the ball better. A win is a win is a win.”

On Rachele Fico‘s performance …
“She grew up a lot today. She got out there and held them down. Not only did she get them out, but she got strike outs in situations where we needed them.”

On getting a sweep tomorrow …
“It has been a while since we have swept Arkansas. I know the seniors want to win tomorrow on their day, so we have to come out and attack the ball.”

On the comeback spirit of the team …
“They never gave up in the dugout. Everything was very positive. The seniors want to make this a great weekend so they were pretty vocal.”

On the three seniors and what they have meant to the program …
“They are the three Texans, and they remind us of that all the time. Cody Trahan has been with me in the bullpen for four years. I’m really happy for her this year because she has had to battle a lot of things that probably could have ended her career. She could have decided to not pitch anymore. She wanted to play and wanted to finish her career. Rachel Mitchell has had a good year this season and has meant a lot to our program. She has developed into a tremendous outfielder. Shortridge is a once-in-a-career type player who can do it all. Even when she is off, she still looks like she is the best player on the field.”

On the double to win game two …
“All of us were saying in the dugout we didn’t want to go back out in the field, and neither did I. I just went up there with the intention to hit it hard and score Mitchell. It was a fastball low and inside so I just stayed through it.”

On if she is in a groove …
“I think I am. I have some of my confidence back. Everybody goes through slumps so you just have to dig yourself back out of it and that is what I’m doing now.”

On senior weekend …
“They have worked hard all four years here so we want to do it big for them on their special day at home.”

On Rachele Fico‘s performance …
“I think she is doing an awesome job as a freshman. Our coaches always tell us not to play as freshman, come in and play like you have been here before. That is what she is doing.”

On her emotions crossing the plate …
“I was joyful, grateful, relieved and all sorts of other emotions. The game was so long, and we all just wanted to end it. We just kept dragging it out so when we finally stepped up and finished it, it was relieving. I’m glad we could pull together and finish strong as a team.”

On Langoni’s game winning hit …
“Langoni just has so much heart and drive. You just know she wants it so bad. She wants it so bad you know she is going to get it done. When the time is right she will step up and be the person that gets it done.”

On Fico’s performance …
“Throughout this whole year our pitching has been an important part of our team and our game. To just come in, step up and do what Rachele did to make our team win was amazing. As a freshman, I was floored by her performance and what she has been able to do for our team.”

On senior day tomorrow …
“It’s exciting but also kind of sad. We’re all going to come out here and are going to play our best. Arkansas is a team that doesn’t quit so we’re going to have to be on our A-game and have a great day.”