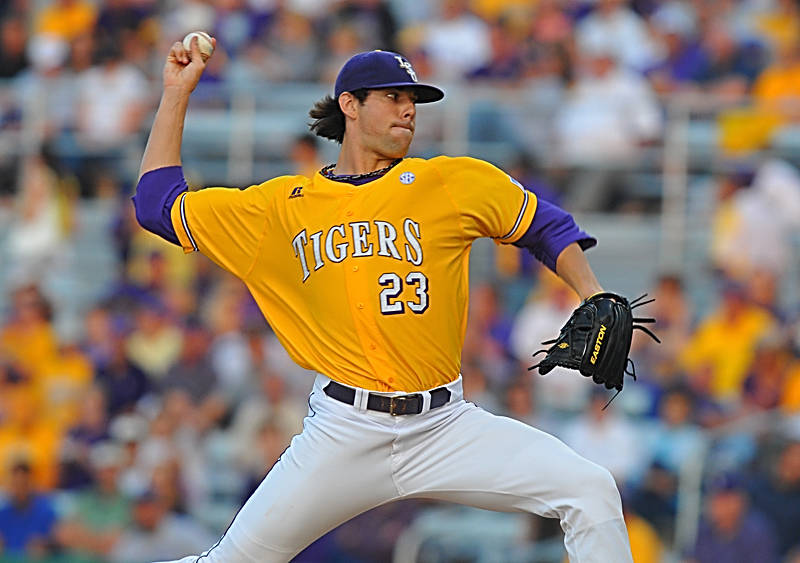 BATON ROUGE, La. – First baseman Blake Dean‘s two homers, including a three-run dinger in the second that erased a 4-3 deficit, powered No. 6 LSU to a 12-5 victory over Alabama in the series opener Friday night in Alex Box Stadium.

The Tigers (28-6, 9-4) erupted for five runs with two outs in the second inning after trailing 4-1 entering the frame. Alabama (22-13, 5-8) would not regain the lead after LSU’s five-run barrage was capped by Dean’s three-run homer.

The series between LSU and Alabama will continue Saturday at 7 p.m. in Alex Box Stadium. LSU fans are encouraged to be in their seats at 6:45 p.m. Saturday for the “Ben McDonald Day” ceremony prior to the Tigers’ game versus Alabama. The No. 19 worn by the LSU All-America pitcher will be formally retired prior to the game, and McDonald’s name and number will be permanently displayed on the grandstand fascia of Alex Box Stadium.

“I was very proud of the way we swung the bats tonight,” said LSU coach Paul Mainieri. “We faced an early deficit, but we responded with a big inning with some great at-bats. I thought it was a great victory for our team in front of a fantastic crowd. Our fans really make a difference with the atmosphere they create here.”

Junior right-hander Anthony Ranaudo (2-0) earned the victory for LSU Friday as he allowed only three earned runs on five hits in six innings of work with eight strikeouts. Crimson Tide starter Adam Morgan (4-2) was charged with the loss after allowing eight runs on seven hits in two innings.

Ranaudo was in control after the second inning, as he held the Crimson Tide scoreless through four frames before giving way to freshman left-hander Jordan Rittiner, who earned his second save of the season after surrendering only one run in the final three innings.

“I thought Anthony really asserted himself in the latter portion of his outing,” Mainieri said, “and he maintained control of the game. Rittiner did a great job as well in not allowing Alabama to generate any late momentum. Their efforts put our pitching in great shape for the rest of the series.”

In addition to Dean’s four RBI, Leon Landry, Grant Dozar and Micah Gibbs each contributed a pair of hits apiece to lead the LSU offensive.

LSU trailed 4-1 after the Crimson Tide responded to Austin Nola‘s first inning solo homer with four runs in the second, highlighted by a bases-loaded single by Taylor Dugas down the third-base line that eventually scored three Alabama runs.

The Tigers took a run back in the bottom of the frame when Leon Landry singled, advanced to second on a balk and reached third on an infield groundout before scoring on a wild pitch by Alabama starter Adam Morgan. Landry’s run cut the LSU deficit to 4-2.

After Dishon sacrificed Grant Dozar to second later in the inning, Mikie Mahtook followed with a triple to right-center, scoring Dozar making the score 4-3.

In the third, the Tigers extended their lead to 8-4 after four-consecutive singles, with Tyler Hanover and Dozar contributing RBI. Dishon made the score 9-4 when he lifted a sac fly RBI to left, scoring Hanover.

Dean launched his second homer to lead-off the fourth inning, giving LSU a 10-4 lead. The homer was the 50th of Dean’s career, moving him into a tie for fifth place on LSU’s all-time list with Ryan Patterson.

The Tigers added two more runs in the sixth, highlighted by an RBI single off the right-field wall by Micah Gibbs. LSU led 12-4 at that point.