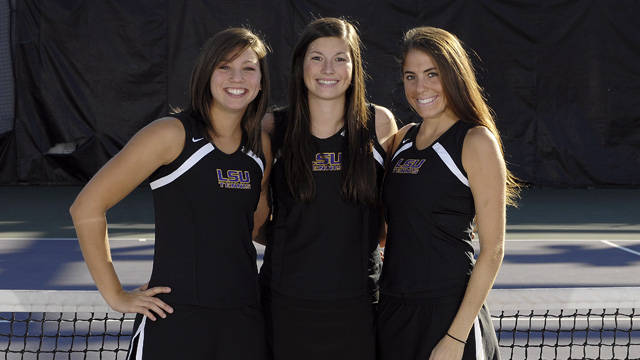 BATON ROUGE — The LSU women’s tennis team will look to bounce back after losing to Vanderbilt as it faces No. 23 Arkansas for Senior Day Saturday at W.T. “Dub” Robinson Stadium. First serve is slated for 1 p.m. CT.

Fans are invited to come out as LSU (9-13, 4-6 SEC) will honor three seniors – Nicole Kantor, Sloane Mathis and Hannah Robinson.

“I’m really excited to play a very, very good Arkansas team on Senior Day. We want to honor three seniors that have been a very integral part of our program and have done a really nice job,” said head coach Tony Minnis. “It’s a big match for us in terms of opportunity to get into the NCAA Tournament. We want to send the seniors off in the right way and also put ourselves in a better position to hopefully make the tournament.”

Arkansas (15-8, 5-5) is featured by one ranked player in No. 43 Anouk Tigu. Tigu partners with Claudine Paulson to list as the 43rd-ranked doubles pair in the nation.

The Razorbacks are second in the Southeastern Conference Western Division while the Lady Tigers register at third place in the west.

Last season, Arkansas ousted LSU, 4-3, as the Razorbacks own the overall series against the Lady Tigers, 18-12.