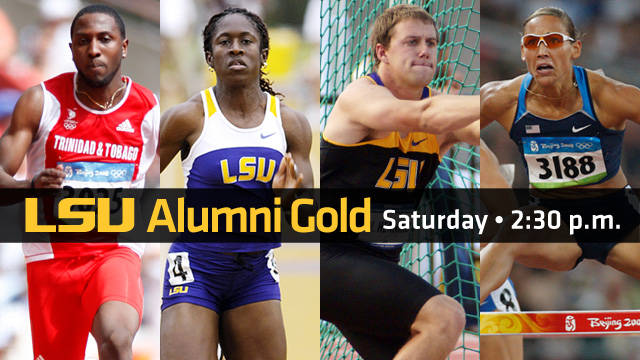 BATON ROUGE – LSU greats and Olympic veterans Lolo Jones and Richard Thompson will join the likes of LSU All-Americans Walter Henning and Samantha Henry in headlining a world-class field that is ready to compete Saturday at the LSU Alumni Gold being held at the Bernie Moore Track Stadium.

The championship finals of this year’s LSU Alumni Gold will start following a brief opening ceremony at 2:30 p.m. CT. The final event of the meet is scheduled for 5:55 p.m.

The LSU Alumni Gold seems to attract a world-class field year in and year out, and this year’s meet is not an exception as many top college and professional athletes are scheduled to compete on Saturday.

The Lady Tigers are ranked No. 3 and the Tigers are ranked No. 8 this week in the most up-to-date power ranking released by the U.S. Track & Field and Cross Country Coaches Association. The Tigers will compete against the likes of nationally-ranked programs in No. 15 Ole Miss and No. 21 Minnesota, while the Lady Tigers will square off against such teams as No. 24 Illinois and Minnesota.

A total of 11 former LSU standouts will return to the Bernie Moore Track Stadium to compete along with the Tigers and Lady Tigers to create an electric atmosphere celebrating the team’s history and tradition.

“We look forward to hosting this meet each year because it really gives us a chance to showcase our team and our program in ways that maybe we don’t get to the rest of the year,” said LSU head coach Dennis Shaver. “We always look forward to having many of our alumni come back to compete. Some of them are opening up their outdoor season for the first time this weekend, which is very exciting for us to see.

“Our athletes will also have the opportunity to compete against them in many of the open events. In many ways, this meet serves as the opener for our athletes in some of the open events on the track. We’ve come to expect a tremendous competition at the Alumni Gold, and I’m sure we will see that again on Saturday.”

The men’s and women’s 4×100-meter relays will be ready to run beginning at 2:35 p.m. CT following the opening ceremony to kick off the afternoon’s festivities.

The LSU Alumni Gold will mark the first competition for Jones since winning her second-straight World Indoor gold medal in the 60 hurdles at the IAAF World Indoor Championships in Qatar on March 13.

Jones, who will make her outdoor debut in the 100 hurdles, became the American record holder in the 60-meter hurdles with her winning time of 7.72 in the finals at the World Indoor Championships. She has the distinction as the only female in history to win back-to-back World Indoor titles in the 60 hurdles.

Like Jones, Thompson will also open up his outdoor season Saturday at the Bernie Moore Track Stadium as he lines up in the 100-meter dash and 4×100-meter relay for the first time in 2010.

After being crowned Olympic silver medalist in both the 100 meters and 4×100 relay in 2008, Thompson followed with a 2009 season in which he anchored Trinidad’s sprint relay to a silver medal and finished in fifth place in the 100-meter final at the World Outdoor Championships in Berlin, Germany. He’s certainly off to a fast start in his professional career as one of the premier sprinters in the world.

Henning will lead a host of LSU stars competing this weekend as he steps into the hammer circle with the nation’s No. 2-ranked performance at 239 feet, 5 inches set last weekend in Miami.

Sophomore All-American Barrett Nugent also recorded one of the nation’s top performances in Miami in the 110 hurdles as he ran the third-fastest wind-legal time and the fourth-fastest time under all conditions at 13.67. The men’s 110 hurdles will also be highlighted by former Tiger standout Ryan Fontenot, former South Carolina national champion Jason Richardson and Illinois All-American Andrew Riley.

For the Lady Tigers, senior LaTavia Thomas will compete for the final time at the Bernie Moore Stadium as she currently ranks No. 2 in the NCAA in the 800 meters with a time of 2 minutes, 5.11 seconds.

Also competing for the Lady Tigers on Saturday will be senior Samantha Henry, who enters the weekend ranked No. 3 in the NCAA and No. 3 in the world in the 100-meter dash with a time of 11.18.

As the name might suggest, this year’s LSU Alumni Gold will feature a host of athletes in the competition who once wore the purple and gold as collegians, including Elkana Kosgei (800 meters), Patrick Lee (400 hurdles), Isa Phillips (200 meters) and Cynetheia Rooks (100 meters, 200 meters).

In addition, 15 seniors will be recognized during the competition as this will be their final home meet as a member of the LSU program. They include Henry, Thomas, Chris Bless, Will Coppage, Josh Dominguez, Reggie Haslom, Armanti Hayes, Jerel Hill, Jamaal James, Richard Jones, Kristina Davis, Liann Kellman, Katelyn Rodrigue, Kayann Thompson and Kim Williams.

After playing host to the LSU Alumni Gold on Saturday, LSU will finish the regular season next weekend as they make the trip to Philadelphia for the 116th running of the Penn Relays being held on April 22-24 at historic Franklin Field on the campus of the University of Pennsylvania.