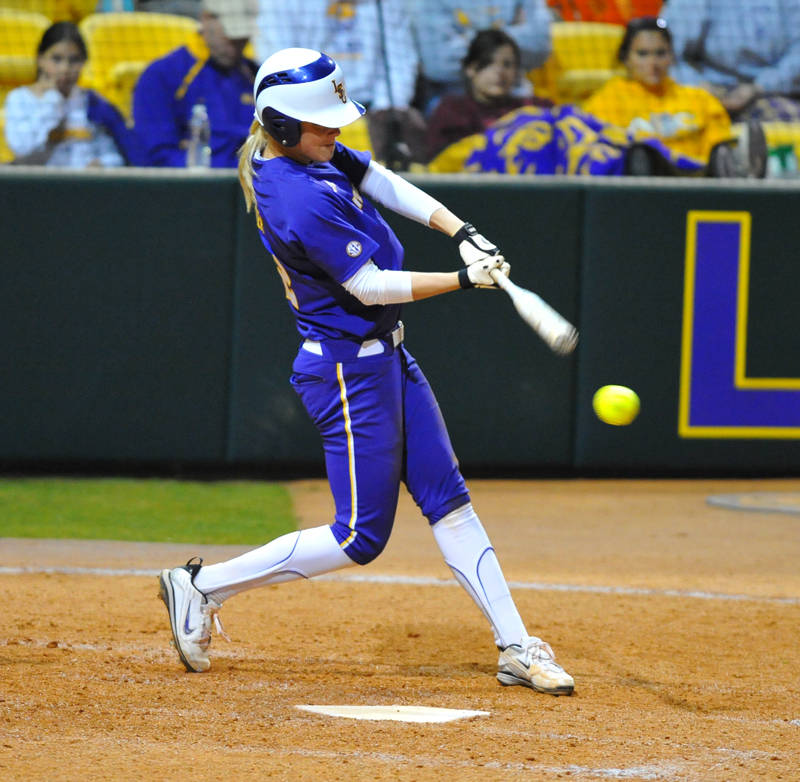 THIBODAUX, La. – Heidi Pizer knocked a pair of home runs for her first career Tiger hits and added three RBIs to lift the No. 15 LSU softball team to a 15-2 triumph over Nicholls Wednesday at the Colonel Softball Complex.

Rachel Mitchell, Kirsten Shortridge and Ashley Langoni, the top three hitters in the LSU lineup, combined for a 6-for-13 effort with 10 RBIs. The 15 runs for the Tigers (33-9) are the most since a 19-run output against Texas Southern during the 2006 season.

“What a great day for Heidi Pizer and the Tigers,” head coach Yvette Girouard said. “We had an injury to Lauren Houston before the game which forced Jessica Mouse to come in from third base and catch. Heidi made the most of her opportunity, made great defensive plays and came up with two huge home runs. She always asks our hitting coach James DeFeo to stay after practice and her hard work has paid off for her.”

Pizer connected for the first of her two long balls to break a 1-1 tie in the second inning and followed with a two-run shot during the fifth inning.

“The coaching staff has been drilling us to find our barrels in practice,” Pizer said. “I wanted to keep the momentum and our team going. I always try to have the same mindset and prepare myself like I’m going to play every game. I’m ready to jump in and contribute in any way the team needs me.”

Langoni set the tone with a RBI-double to give LSU a 1-0 edge in the first inning. The Colonels drew even on Natalie Travasos RBI-ground ball to tie the score at 1-1 after a frame.

With one out during the second inning, Allison Falcon and Jessica Mouse drew back-to-back walks after the Pizer homer. Pinch runner Tiffany Shaw and Mouse executed a double steal, while a Mitchell RBI-ground ball platted Shaw to push the lead to 3-1.

After a Mitchell stolen base, Shortridge ripped a two-run single up-the-middle to make it 5-1. Travasos notched a RBI-single to pull the Colonels back to 5-2 in the third inning.

LSU put the game out of reach with a pair of runs in the fourth and fifth innings. Langoni belted a two-run single, while Pizer cranked her second homer of the evening to extend the LSU advantage to 9-2. It marked the 25th time in program history that a Tiger has ripped two homers in a game.

The Tigers made the most of three Nicholls errors and tacked on six runs in the seventh inning. Mouse, Mitchell, Shortridge and Langoni produced RBIs for the final margin of 15-2.

“I’m love the switch to our lineup because it gives our team a different look,” Girouard said. “It’s been a battle for Kirsten over these last couple of games. She’s too great of an athlete, and we’re hoping this performance tonight is the start of her getting back to her elite level.”

Shortridge teamed Rachele Fico and Cody Trahan to limit the Colonels (20-12) to two runs on three hits. The trio also racked up 10 strikeouts as Fico picked up the win to improve to 13-4 on the season.

LSU returns to action and plays host to Arkansas for a weekend series. Both Saturday’s doubleheader and Sunday’s single game are set for a 1 p.m. first pitch. The Tigers will honor their senior class of Mitchell, Shortridge and Trahan after Sunday’s contest.

All three games of the series will be broadcasted live on ESPN 104.5 and The X 104.9 FM in the Baton Rouge area with Patrick Wright set to call the action. Live stats also are available in the Geaux Zone on LSUsports.net and live game updates via www.twitter.com/lsu_softball.