Baseball to Play Host to Tulane at Alex Box 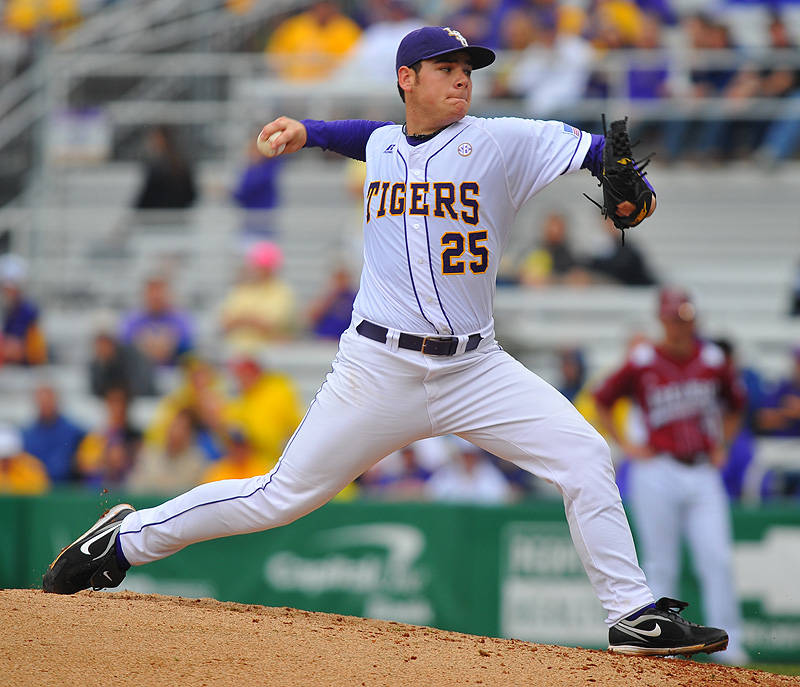 LSU is ranked No. 6 in the USA Today/ESPN and NCBWA polls, No. 7 by Collegiate Baseball and No. 8 by Baseball America. The Tigers have appeared in the Top 10 of at least one college baseball poll for 32 consecutive weeks, a streak that began on May 19, 2008.

The Tigers lost two straight games at Auburn on Saturday and Sunday, marking just the second time LSU has lost two in a row over the past 134 games, a stretch that began on April 22, 2008

LSU coach Paul Mainieri said the Tigers are looking forward to a “rivalry week” as they take on Tulane Wednesday and SEC foe Alabama this weekend in Alex Box Stadium.

“This is a very important week for our team,” Mainieri said. “We’re playing two of our biggest rivals, and, as always, they have outstanding clubs this season. I know our players are excited about the opportunity to be back at Alex Box, starting with Tulane on Wednesday.”

LSU junior catcher Micah Gibbs had another excellent week at the plate for the Tigers, batting .444 (8-for-18) in four games last week with one double, one triple, one homer, six RBI and six runs. Gibbs is batting .403 on the year with six doubles, three triples, five homers and 33 RBI.

Sophomore rightfielder Mikie Mahtook batted .409 (9-for-22) last week with one double, one triple, one homer, four RBI, four stolen bases and eight runs scored. LSU hit .350 (69-for-197) as a team in its five games last week with 13 doubles, five triples, five homers and 49 runs scored, an average of just under 10 runs per game.

Tulane is led at the plate by sophomore infielder Rob Segedin, who is hitting .409 with 20 doubles, two triples, six homers and 30 RBI. Freshman outfielder Brandon Boudreaux is batting .371 with six doubles, one triple, two homers and 24 RBI, while freshman catcher/infielder Blake Crohan is hitting .364 with seven doubles, three homers and 21 RBI.

LSU leads the overall series with Tulane, 161-124-3, and the teams split a pair of meetings last season. Tulane posted an 8-7 win over the Tigers in New Orleans before LSU defeated the Wave, 13-2, in Alex Box Stadium.