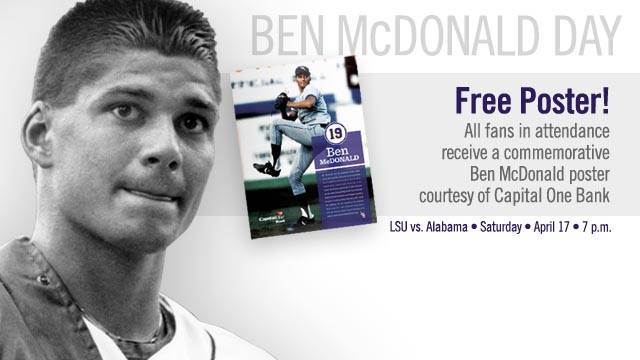 BATON ROUGE — LSU fans are encouraged to be in their Alex Box Stadium seats at 6:45 p.m. Saturday for the “Ben McDonald Day” ceremony prior to the Tigers’ game versus Alabama.

The No. 19 worn by the LSU All-America pitcher will be formally retired prior to the game, and McDonald’s name and number will be permanently displayed on the grandstand fascia of Alex Box Stadium.

McDonald, a right-hander from Denham Springs, La., capped a magnificent 1989 season by receiving the Golden Spikes Award, given by the United States Baseball Federation to the nation’s most outstanding amateur player. McDonald, who was also named National Player of the Year by Baseball America, The Sporting News and Collegiate Baseball, was the first player chosen in the free-agent amateur draft and made his major league debut with the Baltimore Orioles in September, 1989.

McDonald set an LSU career mark with 373 strikeouts and established in 1989 SEC records for single-season strikeouts (202), innings pitched (152.1) and consecutive scoreless innings (44.2). A two-time All-American and a 1988 Olympic gold medalist, he finished his LSU career with a 29-14 record and a 3.24 ERA.

McDonald, who enjoyed an excellent 10-year major league career with the Orioles and Milwaukee Brewers, also lettered as an LSU basketball player. He was a member of the 1986-87 Tiger hoops squad which advanced to the Elite Eight of the NCAA Tournament.

McDonald, who was inducted into the College Baseball Hall of Fame in 2008, has volunteered his time to several philanthropic endeavors, including Special Olympics, Sojourner Truth House (prevention of domestic violence) and Child Abuse Prevention. He has also made significant contributions for the funding of LSU scholarships.

McDonald stays connected to LSU baseball as the color analyst for the Cox Sports Television broadcasts of the Tigers’ games.