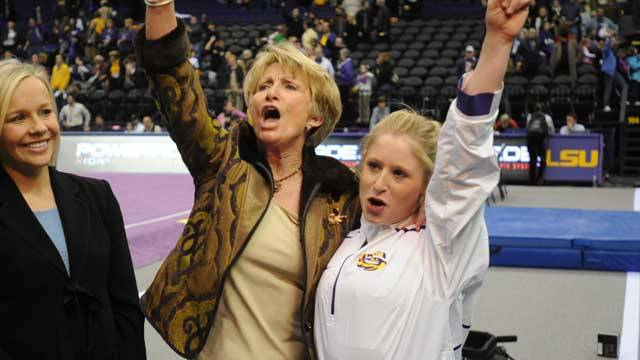 This marks the second straight year LSU has captured the Central Region Gymnast of the Year award as Ashleigh Clare-Kearney won the award last season.

Jackson has been outstanding all season for LSU, anchoring all four events. She was ranked No. 1 in the all-around standings for eight straight weeks, and she currently sits at No. 3.

Heading into the NCAA Championships, Jackson has captured 40 individual titles this season with 11 on vault, 10 all-around, eight on bars, seven on floor and four on beam.

Breaux guided LSU to a perfect 5-0 home record in 2010 with wins over No. 1 Alabama and No. 6 Oregon State, and she has led LSU to the NCAA Championships for the ninth straight year.

She was instrumental in the creation of the Etta James Memorial Meet that works with Foundation 56, an organization created by former LSU linebacker Bradie James to raise awareness and provide screenings for breast cancer. With the help of the local community, Breaux and the Tigers have raised more than $120,000 for Foundation 56 in three years of working with the organization.

LSU will travel to Gainesville, Fla., for the NCAA Championships on April 22 in Florida’s Stephen C. O’Connell Center.