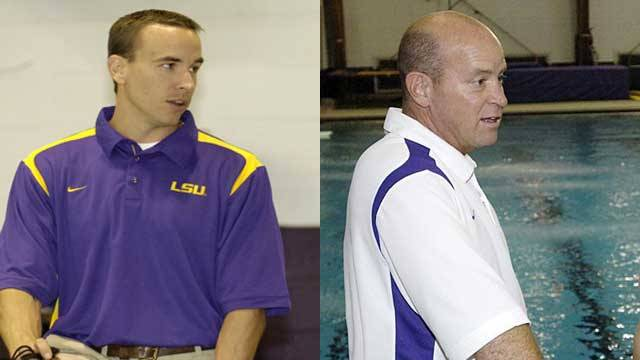 BATON ROUGE – David Geyer and Doug Shaffer have been promoted to lead the LSU swimming and diving programs, vice chancellor and director of athletics Joe Alleva announced on Monday.

Geyer has spent the past five seasons as an assistant coach with the Tigers, while Shaffer has been with the program for eight years as the diving coach.

“I’m excited about promoting David Geyer and Doug Shaffer to lead our swimming and diving program,” Alleva said. “These two men will demand excellence in the classroom, in the community and in competition.

“These two coaches are highly respected by our student-athletes and will lead the LSU swimming and diving program to new heights.”

During his eight years with the Tigers, Shaffer has helped maintain one of the Southeastern Conference’s top diving programs. Shaffer was named SEC Women’s Diving Coach of the Year in 2008 after leading a pair of divers to SEC titles, and he’s also coached 11 NCAA All-Americans and the SEC Freshman Diver of the Year five out of the last six seasons.

In addition, Shaffer’s athletes have routinely excelled in the classroom as he has helped mentor three divers who were named LSU Scholar-Athlete of the Year and an ESPN the Magazine/CoSIDA Academic All-American.

“I’m really excited and fortunate to have this opportunity,” Shaffer said. “I look forward to the added responsibilities that will come with this promotion and working closely with Dave to continue to build the men’s and women’s programs on the conference and national levels.”

Geyer has spent five years with the Tigers, working with all phases of the program. As an assistant, Geyer was instrumental in helping numerous athletes shatter program records and earn All-America honors while also playing a vital role in the recruitment of top-level international student-athletes.

In 2008, Geyer trained former LSU standout and Olympian Miko Malberg prior to the Beijing Olympic Games where the former All-American went on to set an Estonian national record in the 50-meter freestyle and place 25th overall.

He also traveled to Croatia for the 2008 European Short-Course Championships as a member of the Estonian National coaching staff where he guided Malberg to a pair of national records and helped an Estonian relay qualify for its first championship final at that competition.

In addition to his LSU coaching duties, Geyer also served as the head coach of Tiger Aquatics for the past four seasons, and the club enjoyed unprecedented success under his leadership.

“It’s an honor that LSU had the faith in me to lead the swimming programs,” Geyer said. “I am really looking forward to guiding these programs in a positive direction and helping our student-athletes not only excel in the water but in the classroom and community as well.”