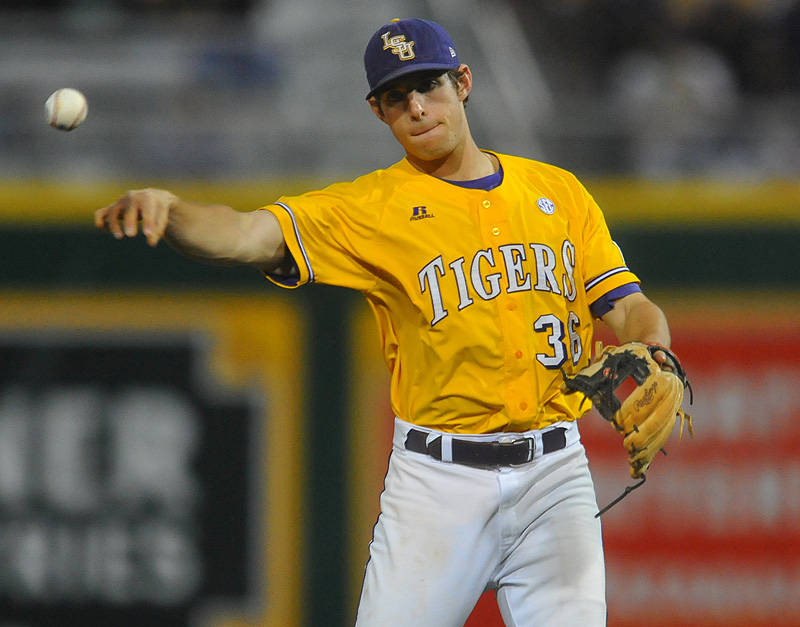 AUBURN, Ala. – A squeeze bunt by rightfielder Justin Fradejas scored shortstop Casey McElroy with the winning run in the bottom of the ninth inning Sunday as Auburn posted a 6-5 win over third-ranked LSU.

Auburn improved to 21-11 overall and 7-5 in the SEC, while LSU dropped to 26-6 and 8-4. Auburn won two of three games in the weekend series, ending LSU’s SEC series win streak at seven. The Tigers lost a league series for the first time since April 17-19, 2009 versus Tennessee.

The Tigers return to action at 6:30 p.m. Wednesday when they play host to Tulane in Alex Box Stadium.

Auburn reliever Austin Hubbard (3-1) earned the win, as he limited LSU to one run on one hit in four innings with no walks and three strikeouts.

LSU reliever Austin Ross was charged with the loss as he allowed two runs on three hits in four innings with no walks and five strikeouts.

McElroy led off the ninth inning with a double off of Ross, and he moved to third on a single by DH Kevin Patterson. Ross was relieved by right-hander Matty Ott, whose first pitch was bunted down the first-base line by Fradejas. LSU first baseman Blake Dean fielded the ball and flipped it to catcher Micah Gibbs, but McElror slid in safely under the tag to give Auburn the win.

“It was a hard-fought game, and I credit our players for the way they competed the whole day,” said LSU coach Paul Mainieri. “We’ve established a very good record in SEC series play, and we’re very proud of what we’ve accomplished over the past couple of years. We’ll build from this experience and move forward.”

Auburn got on the scoreboard in the second when Fradejas delivered an RBI single.

Auburn narrowed the gap to 3-2 in the third on a solo homer by first baseman Hunter Morris, his eighth dinger of the season.

The Plainsmen took  a 4-3 lead in the fourth as catcher Tony Caldwell unloaded a solo homer and centerfielder Trent Mummey lined a run-scoring single.

LSU tied the game in the fifth when Nola ripped an RBI single, scoring rightfielder Mikie Mahtook, who had singled earlier in the inning.

Patterson gave Auburn the lead again in the sixth with a solo homer, his eighth dinger of the season.

The Tigers tied the game again in the top of ninth when leftfielder Johnny Dishon launched a solo homer off of Hubbard.