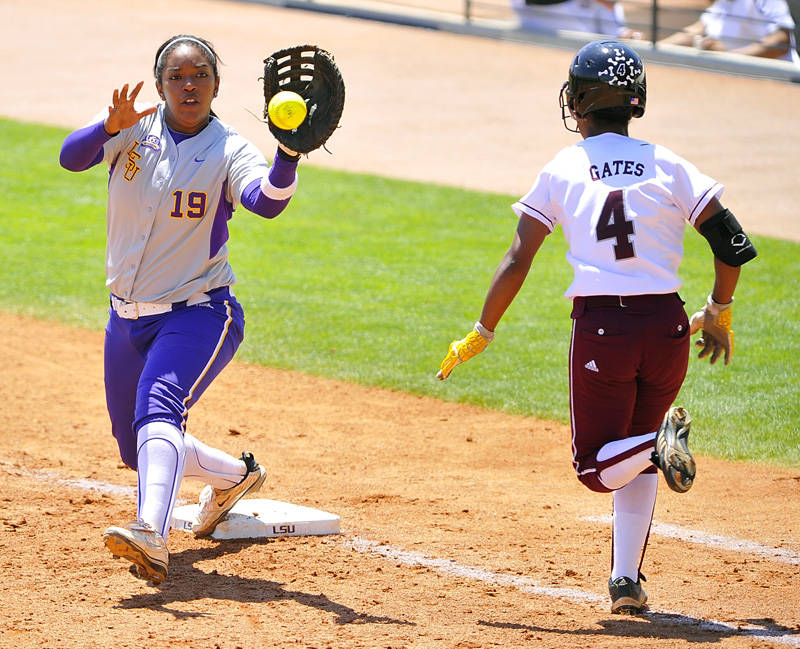 LSU (32-9, 11-5 SEC) picked up its 22nd consecutive win at Tiger Park and moved to within one game of Alabama for first place in the SEC Western Division. It also marked the fifth consecutive season that LSU has swept Mississippi State (22-21, 3-12 SEC) on the softball diamond.

“It was a little bit of a healing process,” head coach Yvette Girouard said. “It makes everyone feel better about themselves and helps them get back on track. They have a lot of pride, feel like they are a very good team and can do a lot of damage throughout the season. We had to let it [the losses last week] go. I even got a call from Skip Bertman pumping me up and telling me how we won the College World Series a couple times after he got swept by Alabama and Florida.”

The Tigers received a combined 4-for-8 effort with RBIs from Rachel Mitchell, Kirsten Shortridge and Anissa Young. The LSU defense also turned a season-best three double plays, while Rachele Fico limited the Bulldogs to an unearned run on four hits. She tallied three strikeouts against three walks to improve to 12-4 on the season.

Chelsea Bramlett turned in a 3-for-3 performance to pace the Bulldogs. She opened the game with a leadoff double, stole third base and came around to score on a Morgan Russell throwing error to give the Bulldogs a 1-0 edge.

Fico settled in aided by a tailor-made 5-4-3 double play started by Jessica Mouse to end the first inning. She held the other eight MSU hitters to a 1-for-18 clip.

LSU also received an outstanding running catch by Ashley Langoni from her left field post during the second inning. She alertly fired back to Allison Falcon in the infield to tag Brittany Bell, who left early attempting to move from first to second base.

“Last year when she [Langoni] struggled in the infield, she was shagging balls one day and I knew she needed to be in the outfield. She makes ESPN plays every day in practice,” Girouard said. “She’s not afraid and one of the few girls I have ever had that is truly not afraid of any fence or wall.”

After Ashley Applegate was hit-by-a-pitch to open the second inning, LSU strung together a trio of RBIs hits ignited by a Mouse RBI-double to left field to tie the score at 1-1. Mitchell and Shortridge struck for back-to-back RBI-singles to propel LSU to a 3-1 advantage.

Allison Falcon added a sacrifice fly to score pinch runner Lindsay Price to make it 4-1 after four innings. Price was running for Young, who was hit-by-a-pitch to start the frame.

Young crushed a homer on a 3-2 pitch onto the left field berm to open the fifth inning. The Tigers took advantage of a pair of walks and hit batters capped by Mitchell free pass to extend the LSU lead to 6-1.

With one out in the seventh inning, Young capped the fantastic defensive day for the Tigers. She snagged a Courtney Nesbit line drive and stepped on first base to double off Bell to secure the 6-1 win.

LSU steps out of SEC play with a Wednesday trip to Nicholls State. First pitch is scheduled for 6 p.m. and the game will be broadcasted live on ESPN 104.5 and The X 104.9 FM in the Baton Rouge area with Patrick Wright and Matt Dunaway set to call the action.

Live stats also are available on LSUsports.net along with in-game updates via www.twitter.com/lsu_softball.

On the sweep this weekend …
“It was a little bit of a healing process. It makes everyone feel better about themselves and helps them get back on track. We played good defense and the kids came through when we needed them to. Some bats struggled but hopefully they will all start rolling at the right time.”

On what she thought of Langoni’s catch …
“She makes outstanding plays every day in practice. Last year when she struggled in the infield, she was shagging balls one day and I knew she needed to be in the outfield. She makes ESPN plays every day. She is not afraid. She is one of the few girls I have ever had that is truly not afraid of any fence or wall. She is one of the best left fielders we have ever had.”

On how the team felt after last week’s losses …
“The emotions were so high. Everybody was so down after the weekend, especially the way we lost when we were ahead. They have a lot of pride, feel like they are a very good team and can do a lot of damage throughout the season. Everyone was extremely disappointed.”

On what she told the team to motivate them …
“We had to let it go. I even got a call from Skip Bertman pumping me up and telling me how we won the College World Series a couple times after he got swept by Alabama and Florida. I asked him to come and talk to the team on Friday. He couldn’t make it, but is coming to talk to them on Tuesday. I can’t think of a better man to ground everyone. He’s the best.”

On how she felt about Rachele Fico‘s outing …
“Good. We still are working on some stuff, but she only gave up four hits and shouldn’t have given up the run. I thought she controlled them because they are a very good offensive team.”

On putting Rachel Mitchell at the leadoff spot …
“We just felt like Kirsten Shortridge needed something to calm her down and take some pressure off. I love it. You have a kid who can potentially hit the ball out of the park. I like that switch and we’re probably will stay with it for a while.”

On the great play of the defense turning three double plays …
“We couldn’t turn double plays for years. The combination of Allsion Falcon and Courtney Hollier is dynamite. Falcon might struggle with the bat but she is so smooth at shortstop. She has the highest vertical jump on the team and she shows it out there. She is a very solid. She plays so much bigger than she really is in stature.”

On how it feels to get the sweep …
“Amazing. We really needed that after our tough road trip. We all felt really good this weekend, we came back and did what we needed to do.”

On batting leadoff …
“Before I came to LSU, I used to bat leadoff. It was nothing new to me, I just haven’t done it in a while. I used to hit there so I can do it. I like to start the game off on a positive note and it feels pretty good.”

On how it feels to bounce back on a positive note …
“It’s always really important to bounce back and show that we are not just going to roll over and die. We had some bad luck on the road and we came back. We’re not going to give up.”

On what Coach Girouard told them after the losses …
“She stayed positive with us. She knows that a lot of us have been struggling lately, but we just need to come out and practice hard. She didn’t put too much pressure on us and always had faith in us so that helped out a lot.”

On if she thought Ashley Langoni was going to make the catch …
“Of course, she has made some of the most amazing plays I have ever seen in the outfield just this year alone. There was no doubt in my mind when I saw her sprinting towards it. I knew in her mind she knew she was going to catch it and I knew she would catch it by how she was running. I wasn’t surprised she caught it, but it was an amazing play.”

On how she felt about her complete game …
“It was a good outing after the past week. We were really mixing pitching and working the corners. The defense played great behind me, they made a lot of plays in the infield and the outfield. Langoni made an awesome catch over the fence and then got the girl out at second for leaving early.”

On facing Mississippi State leadoff hitter Chelsea Bramlett
“She is a great player and she is tough to play against. We just took it one pitch at a time. I know once we got past her I had to stay focused on the batter that was up to bat and not her on the bases. We came up big and made plays when we had to.”

On how she motivated herself to bounce back …
“I learned a lot this past weekend by facing some of the best hitters in the country. I just had to bounce back, take it one pitch at a time and not change the way I’m playing. Just keep going at it and putting everything that happened behind me.”