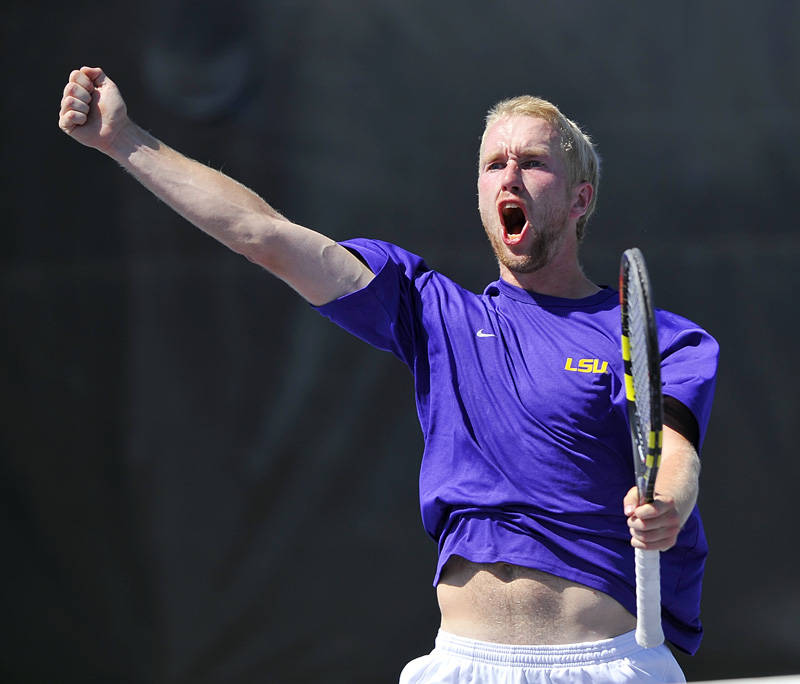 BATON ROUGE – The final decision in the LSU men’s tennis match on Sunday against Vanderbilt came down to the last court before the Tigers fell to the Commodores, 4-3, in W.T. “Dub” Robinson Stadium.

Although Vanderbilt took the doubles point, LSU duo Sebastian Carlsson and Neal Skupski earned their second victory of the weekend at No. 1 doubles after defeating Vanderbilt’s Alex Zotov and Adam Baker by a dominant 8-3 mark.

“Sebastian and Neal gave us an opportunity to win a doubles point, but we didn’t put the rest of it together,” LSU head coach Jeff Brown said.

As in doubles, LSU took the first match in singles.

Cody Loup kicked off singles with a straight-set victory for LSU over Charlie Jones, 6-3, 6-2.

Not long after Skupski fell, sophomore Mark Bowtell pulled the Tigers even at 2-2 when he took down No. 114 Vijay Paul in three sets, 6-0, 1-6, 6-3. The win pushed Bowtell’s record against nationally-ranked opponents to 3-2.

After Bowtell’s win, three matches remained in progress as Carlsson, Julien Gauthier and Stefan Szacinski each battled into three-set standoff with his Vanderbilt opponent.

Gauthier’s match was the first to finish as the LSU junior slipped in the third set for Bryant Salcedo to claim the point for Vanderbilt, 6-2, 0-6, 6-1.

Carlsson was next off the courts with a stunning three-set win for the Tigers. After dropping the first set by a narrow 7-5 margin to Alex Zotov, the LSU junior bounced back to take the next two sets, 6-2, 6-4, and pushed the match decision to court No. 5 where Szacinski was down 4-1 to Vanderbilt’s Adam Baker.

Szacinski managed to notch one final point in the set before Baker pulled away and took the match, 7-5,
4-6, 6-2.

“Vanderbilt did a good job at the top by taking away one of our better singles points, and we kept battling,” Brown said. “It was good to see Cody get a win and Mark get back on track. Sebastian continues to perform well in clutch situations. We just lost two three-set matches at home and that’s the difference.”

The match is the fourth LSU has lost by a 4-3 mark in dual competition and drops their record to 5-14.

The Tigers’ final home match will be on Tuesday when LSU takes on South Florida at 3 p.m. CT in the “Dub.”