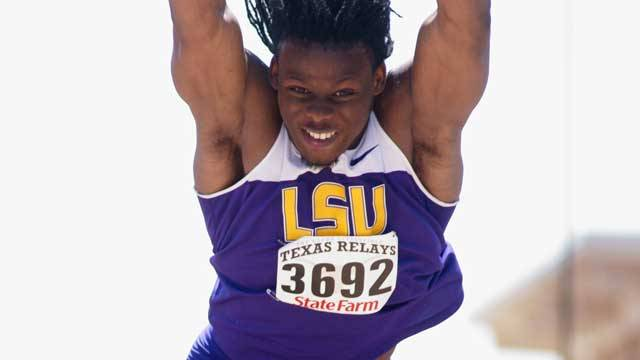 MIAMI, Fla. – After opening up the outdoor season a week ago with a personal-best throw of 236 feet, 1 inch to win the hammer throw title at the 83rd Clyde Littlefield Texas Relays, LSU junior Walter Henning improved his best to 239-5 during Saturday’s action to take the title at the Miami Elite Invitational.

Henning set the pace for the LSU track and field teams as the Tigers and Lady Tigers combined for a total of 10 event titles and 11 Top 10 performances in the NCAA this season during Saturday’s competition.

“We wanted to give our student-athletes the opportunity to open up and compete in their individual events in this track meet, and I thought they really took advantage of the opportunity they were given,” said LSU head coach Dennis Shaver. “We saw some tremendous individual efforts today by our athletes that will be a key for us as we start to build the kind of consistency we need down the stretch.”

After opening the competition with a mark of 229-7 on his first attempt, Henning fouled his second before unleashing a throw of 239-5 on his third attempt to take a commanding lead heading into the final.

While following with another impressive throw of 235-11 on his fifth attempt, Henning’s mark of 239-5 stood as the event winner during Saturday’s competition as sophomore teammate Michael Lauro earned a second-place finish in the meet’s first event with a top mark of 203-0.

Henning continued his record-setting junior season as the most dominant thrower at the collegiate level as his winning throw of 239-5 broke the nine-year Cobb Stadium facility record and 15-year old Miami Elite Invitational meet record in the hammer throw. The NCAA Indoor champion remained perfect for 2010 as he earned his eighth victory in eight competitions in the weight throw and hammer throw this season.

Not only that, but he improves his position as the No. 2-ranked hammer thrower in the NCAA this season as he trails only the mark of 245-6 set by defending NCAA champion Marcel Lomnicky of Virginia Tech.

The Lady Tigers were the first to step onto the track at Cobb Stadium for the afternoon session and blazed to the finish line with the second-fastest time in the 4×100-meter relay. Senior Samantha Henry, freshman Kimberlyn Duncan, freshman Takeia Pinckney and senior Kristina Davis carried the stick around the oval with a seasonal-best time of 43.37 to finish runner-up to the professionals from Pure Athletics (42.95).

After the leadoff leg on LSU’s sprint relay, Henry returned to the track for her outdoor season debut in the 200-meter dash and lit up the straightaway with the second-fastest time in the country under all conditions with a wind-aided time of 22.94 seconds to finish second to former Lady Tiger Kelly Baptiste (22.58w).

Pinckney was also impressive in the short sprints as she shattered her own wind-legal PR in the 100-meter dash with the fifth-fastest wind-legal time in the nation at 11.38. She then followed with a wind-aided time of 23.34 in the 200-meter dash to take fourth place and rank No. 8 in the NCAA under all conditions.

Like Henry, fellow senior LaTavia Thomas wrapped up the meet as the nation’s second-ranked performer in her specialty event after finishing runner-up in the 800 meters with a season-opening time of 2:05.11. Junior Brittany Hall placed third in the event with the nation’s No. 7-ranked time at 2:06.67.

Sophomore All-American Rachel Laurent also enjoyed a Top 10 performance on Saturday as she won the pole vault title with a seasonal-best clearance at 13 feet, 11 ¼ inches to rank No. 7 nationally in the event.

The Tigers were led on the track by sophomore All-American hurdler Barrett Nugent, who was runner-up in men’s 110-meter hurdles with a seasonal-best time of 13.67. Nugent, who just missed tying his own PR of 13.66 in the event, ended the meet with the NCAA’s No. 2 wind-legal time in the sprint hurdles and the No. 3 performance under all conditions during the 2010 outdoor season.

Senior Richard Jones made a splash in his outdoor debut in the 800 meters as he took the event title with a time of 1:47.95 to move into the No. 4 spot on the NCAA performance list this season. He finished ahead of freshman teammate Sadiki White, who set a new lifetime PR of 1:49.13 for a runner-up finish.

Senior Armanti Hayes added an event championship for the Tigers in the 400-meter dash during the day’s action while posting the nation’s eighth-fastest time at 46.28 in his outdoor season opener.

LSU came away with six other event titles during Saturday’s meet, including four by the Tigers and a pair by the Lady Tigers. Capturing event crowns for the Tigers were senior Josh Dominguez in the pole vault (17-6 ¾) and juniors Mark DeBlanc in the javelin (206-2), Alan Sticker in the 1,500 meters (3:52.42) and Zedric Thomas in the long jump (24-3 ¾). Adding titles for the Lady Tigers included junior All-American Brittani Carter in the high jump (6-0) and sophomore Samia Stokes in the discus (158-8).

A three-time All-American in the high jump, Carter has now cleared 6-0 three times this year. Dominguez has also shown great consistency while clearing 17-5 in the pole vault on three occasions.

Hill set a wind-legal personal best in the 100-meter dash for the second-straight week with a time of 10.34 to finish third in Saturday’s final. He also recorded an impressive wind-aided time of 20.90 en route to a runner-up finish in the 200-meter dash. Caraway was the third-place finisher in the pole vault with a mark of 17-0 ¾, while Thompson was the fourth-place finisher in the 800 meters with a time of 1:50.75.

The Tigers and Lady Tigers return home April 17 as they play host to the annual LSU Alumni Gold at the Bernie Moore Track Stadium. As part of the weekend’s festivities, the inaugural LSU Track & Field Team Awards and Alumni Recognition Banquet will be held on Friday at the Crowne Plaza Baton Rouge.