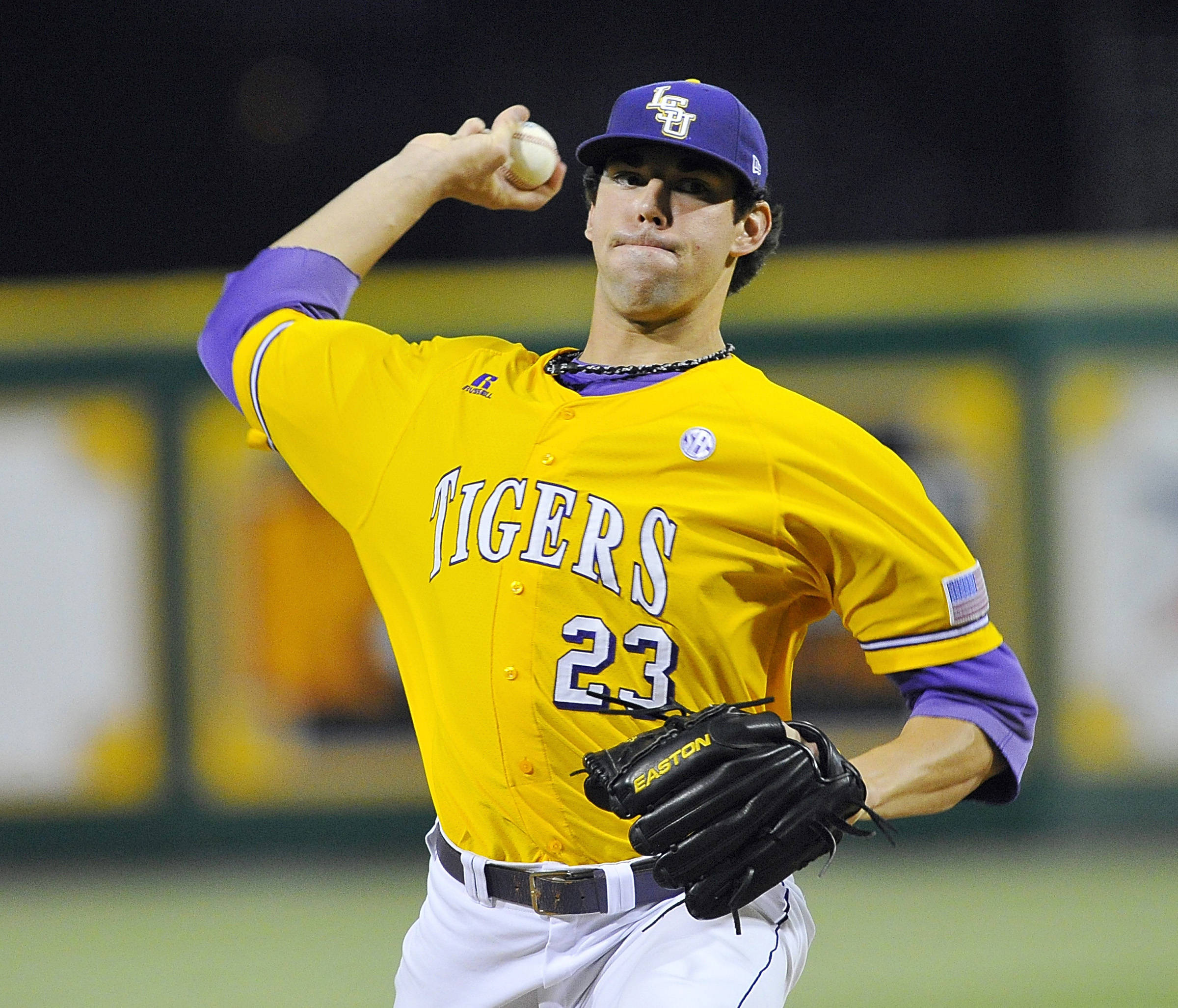 AUBURN, Ala. – Third-ranked LSU struck for six first-inning runs Friday night and held off a late Auburn rally as the Tigers posted a 14-10 victory at Plainsman Park.

Game 2 of the series will start at 2 p.m. CT. The game may be heard on the LSU Sports Radio Network, and audio and live stats are available at www.LSUsports.net.

Saturday’s game will be televised by SportSouth (Cable Ch. 38 in Baton Rouge), and it may also be viewed at www.ESPN3.com.

Sophmore left-hander Chris Matulis (5-0, 2.57 ERA) will start on the mound for LSU, while Auburn will counter with sophomore right-hander Jon Luke Jacobs (0-2, 6.08 ERA).

The Tigers erupted for six runs on seven hits against Auburn starter Cole Nelson (4-2) in the first inning. LSU expanded the lead to 14-3 in the eighth inning before Auburn staged a late rally.

“Auburn has a tremendous lineup, and they can strike at an time during a game,” LSU coach Paul Mainieri said. “I’m glad we were able to produce the runs we did, because we certainly needed them.”

LSU junior right-hander Anthony Ranaudo (1-0) posted his first win of the season, as he worked five innings and limited Auburn to three runs on five hits with three walks and three strikeouts. Ranaudo threw 86 pitches in his longest outing since returning from a  stress reaction injury to his right elbow.

LSU scored six first-inning runs on seven hits, six of them singles, as Nelson (4-2) couldn’t record an out from any of the eight hitters he faced before being replaced with men on second and third and LSU up 6-0.

Ranaudo allowed two first inning runs as Auburn crept to within 6-2 in the first before LSU struck for   for eight runs on 10 hits and three walks over the next seven innings to build a 14-3 lead.

With the game seemingly out of reach and both teams emptying their benches, Auburn scored five eighth-inning runs to make it 14-8. The big blast was Trent Mummey’s second career grand slam, turning a Daniel Bradshaw pitch into his second home run in the last three games.

After putting LSU down in order for just the second time in the game in the top of the ninth, Auburn continued to rally, bringing the tying run to the on-deck circle with only one out in the inning. Ryan Jenkins doubled to lead off the ninth and knock Bradshaw out of the game after he had allowed five runs in an inning of work, allowing four hits and walking three.

Paul Bertuccini came in and threw a wild pitch that allowed Jenkins to score, putting a sixth run on Bradshaw’s tally. A Kevin Patterson triple to the wall followed and then he scored on a second wild pitch to make it 14-10. A walk by pinch hitter Caleb Bowen preceded Bertuccini hitting Justin Fradejas, prompting a second move to the bullpen in the inning.

Freshman left-hander Chris Cotton got the call from Mainieri to face the top of the Auburn order and induced two fly balls to end the inning and the game, earning his first save of the season.

The two through five hitters in LSU’s order finished the game a combined 13-for-22 with 11 runs scored and eight runs batted in, led by catcher Micah Gibbs‘ four hits and centerfielder Leon Landry‘s three RBI.