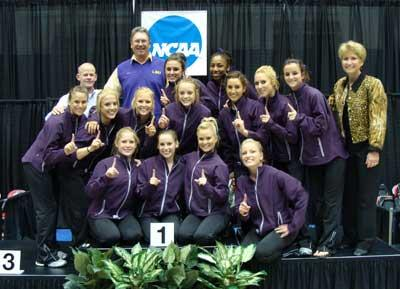 STATE COLLEGE, Pa. – The 11th-ranked LSU gymnastics team will go after a school record third-straight NCAA regional title as the Tigers will compete at the NCAA Northeast Regional hosted by Penn State at 5 p.m. CT Saturday in Rec Hall.

Competing at its 26th-straight NCAA regional, LSU (11-7-1) captured the NCAA Central Regional titles in 2008 and 2009, and a first-place finish at Penn State would mark the first time the Tigers have won three-straight regional titles. LSU won back-to-back titles on one other occasion in 2004 and 2005.

“The regional is always the toughest meet of the year emotionally and physically,” head coach D-D Breaux said, “but I feel like our SEC schedule and Championship prepares us well. We had a practice session today to get used to the equipment and the venue, and all I ask my kids is to do what we have done the last half of the season and compete hard.”

With a first or second-place finish in the regional, LSU would advance to the NCAA Championships for the ninth consecutive season.

The Tigers enter the regional as the No. 2 seed behind undefeated and second-ranked Oklahoma. Penn State is the No. 3 seed, and Maryland, Ohio State and New Hampshire will also compete for a spot in the national championships.

“The competition is tough,” Breaux said. “It is a very competitive region, and this will be a real battle for the top two places.”

LSU will rely on its four All-American seniors to lead the team as Sabrina Franceschelli, Summer Hubbard, Susan Jackson and Kayla Rogers have provided high scores all season.

Jackson, the 2010 Southeastern Conference Gymnast of the Year, will also look to defend her regional all-around crown. Last season, Jackson won the central regional title with a 39.600 total.

Jackson will also attempt to break another LSU record with an 11th all-around title of the season at the regional. Jackson is currently tied with former Tiger Sandra Smith with 10 titles in a season.

Junior Samantha Engle ranks 19th in the beam rankings with a 9.870 regional qualifying score, and Hubbard ranks 16th on bars with a 9.885 RQS.

Sophomore Gloria Johnson has stepped up as she earned Second Team All-SEC honors at the SEC Championship with a 9.875 on vault.

The Tigers will also count on sophomore Ashley Lee and freshmen Ericka Garcia and Shelby Prunty for solid scores.

Live audio will be provided in the Geaux Zone on LSUsports.net, and fans can also find a live stats link on LSUsports.net. Live updates will be available on twitter by following @LSUgym.

If LSU finishes in first or second place, the Tigers will continue their quest for a third-straight Super Six berth at the NCAA Championships in Gainesville, Fla., April 22-24.