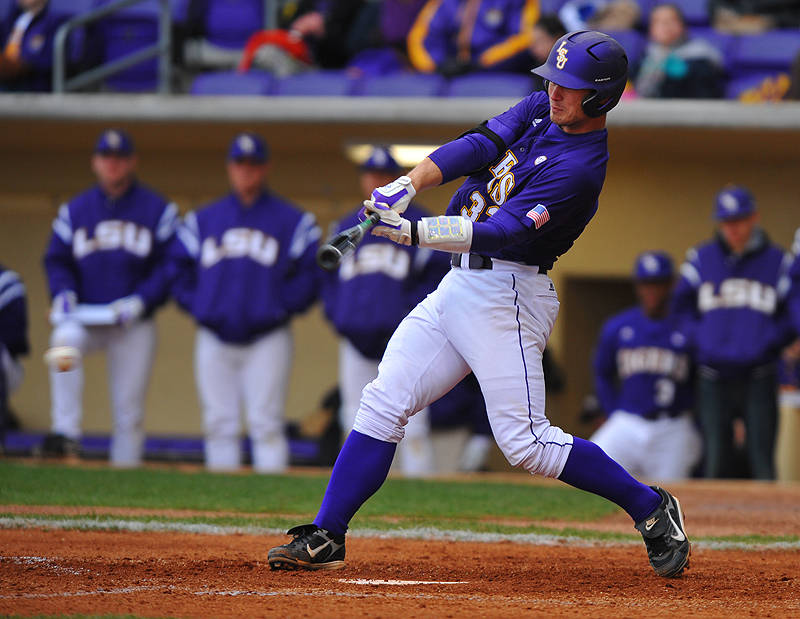 METAIRIE, La. – Pinch hitter Wet Delatte lined a walk-off single in the bottom of the 12th inning to lift No. 3 LSU to a 6-5 victory over Southern Mississippi in the annual Wally Pontiff Jr. Classic in front of 9,370 fans Wednesday night at Zephyr Field.

After Southern Miss second baseman Taylor Walker launched a solo homer in the in the top of the twelfth, the Tigers (25-4) responded in the bottom of the frame when pinch hitter Mason Katz doubled off the wall in left field and Leon Landry ripped a triple into right that scored Katz and knotted the game at 5-5.

Southern Miss dropped to 16-11 with the loss.

LSU will be back in action this weekend when it travels to face Auburn in a three-game SEC series beginning at 7 p.m. Friday at Plainsman Park. Friday’s game will be televised by Comcast/Charter Sports Southeast (CSS) and will air in Baton Rouge, New Orleans and Lafayette on Cox Cable Channel 4.

“It was a great college baseball game, and I’m very proud of the way we competed against a tremendous Southern Miss team,” said LSU coach Paul Mainieri. “I’m especially pleased for Mason Katz and Wet Delatte; they’re two young guys who took advantage of opportunities and they came through for us in a big way.”

The Tigers were led offensively by Micah Gibbs, who finished with three hits and a season-high four RBI, including a three-run homer that erased a 3-0 deficit in the fourth inning. Gibbs’ four RBI also ties his career high.

Southern Miss took an early 1-0 lead in the first inning when shortstop B.A. Vollmuth singled up the middle to score right fielder Marc Bourgeois. The Golden Eagles added another run in the inning when first baseman Adam Doleac reached first on a fielding error by Tyler Hanover, making the score 2-0.

The Golden Eagles added to their lead in the fourth inning when center fielder Tyler Koelling singled up the middle off reliever Mitch Mormann, scoring Anthony Doss, giving Southern Miss a 3-0 lead.

The Tigers tied the game at 3-3 in the bottom of the frame when Gibbs blasted a three-run homer over the right-field wall after Hanover was hit by a pitch and Blake Dean singled to left-center. Gibbs’ fifth homer of the season was his second hit of the game; a single in the second inning extended his hitting streak to 11-straight games.

Gibbs broke the tie in the fifth inning when he laced a two-out single through the right side, scoring Hanover and giving LSU a 4-3 advantage.

Southern Miss knotted the game at 4-4 in the sixth when Doss lifted a sacrifice fly to left field, scoring Mark Ellis from third.

After the Tigers came up short in the bottom of the ninth, the game headed into extra innings with the score tied at 4-4. Sophomore right-hander Matty Ott entered the game in the 10th and retired the side in order.

Chris Cotton (1-0) entered the game in the 12th inning and surrendered a solo homer to Walker that put Southern Miss ahead 5-4.