No. 14 Softball Drops Two Tough Ones to Alabama 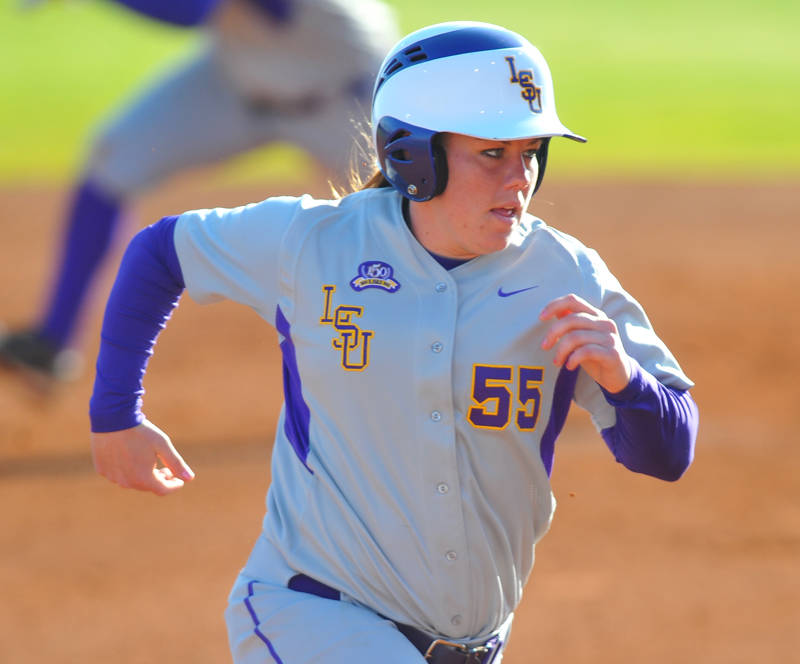 TUSCALOOSA, Ala — The No. 14 LSU softball team dropped a pair of 3-1 and 4-3 hard-fought decisions at No. 6 Alabama Wednesday as 2,366 fans gathered at the UA Softball Complex.

The Tigers (29-9, 8-5 SEC) have dropped five consecutive road games to pair of teams that have appeared in back-to-back Women’s College World Series.

Alabama (29-9, 12-4 SEC) received both wins in the circle from Kelsi Dunne as the junior right-hander improved to 16-4 on the season. She surrendered only two hits and recorded 17 strikeouts over her 8.2 innings of work.

With the game two even at 1-1 in the sixth inning, Kirsten Shortridge slapped a leadoff single through the left side. Shortridge moved to second base on a Juliana Santos ground ball. The Crimson Tide went to Dunne to replace starter Charlotte Morgan, who tossed 5.1 innings of two-hit ball. On a 0-2 offering, Mitchell belted a two-run homer over the centerfield fence to propel the Tigers to a 3-1 advantage.

Alabama responded with an Amanda Locke solo shot in the home half of the frame to draw back to 3-2 before Jennifer Fenton added a two-run blast with one out during the seventh inning for the 4-3 walkoff win. Rachele Fico fell to 12-4 with the loss.

“It’s extremely gut wrenching when you have opportunities and can’t get the job done,” head coach Yvette Girouard said. “There’s no doubt we’ll stew on these tough losses tonight. The thing is you have to have a short-term memory in softball. Give credit to Alabama because they made some things happen with the long ball. The bottom line is we have to learn from these tough moments, let them go and move forward to our next series.”

Mitchell cranked a RBI-double into the right centerfield gap to open the scoring for LSU in the first before the Crimson Tide used a RBI-single from pinch hitter Jazlyn Lunceford to knot the score at 1-1 through five innings.

The first game opened as a pitcher’s duel as Cody Trahan and Dunne kept the game scoreless through five frames. Trahan worked out of jams to force Alabama to strand multiple runners in the first, third and fourth innings, while Dunne started in a groove by retiring 15 of the first 17 batters she faced.

Jessica Mouse was hit-by-a-pitch to open the sixth inning and pinch runner Tiffany Shaw moved to second base as Shortridge reached on an UA throwing error during a sacrifice bunt. Both players executed a double steal to perfection to advance into scoring position.

Two batters later, Mitchell loaded the bases on an intentional walk. Anissa Young was plunked on a 1-0 pitch before Dunne regrouped to get Santos to strike out to keep the score at 1-0.

The Crimson Tide fired back with a trio of runs in the bottom of frame highlighted by a Fenton bases loaded walk and a Kayla Broud two-run single with two outs.

Dunne sat down seven of her last 10 batters via the strikeout en route to 14 Ks, while Trahan moved to 8-2 with the setback.

“Dunne was magnificent and did an excellent job of keeping our hitters guessing,” Girouard said. “Both Alabama and Florida are great programs who are extremely tough to beat at home. The truth is they’re a little bit better than us right now. We have to keep working hard and good things will happen to us down the road. It’s all about playing your best ball at the end of the season.”

All three games will be broadcasted live on ESPN 104.5 and the X 104.9 FM in the Baton Rouge area with Patrick Wright and Kent Lowe set to call the action. Live stats also are available on LSUsports.net along with in-game updates on www.twitter.com/lsu_softball.