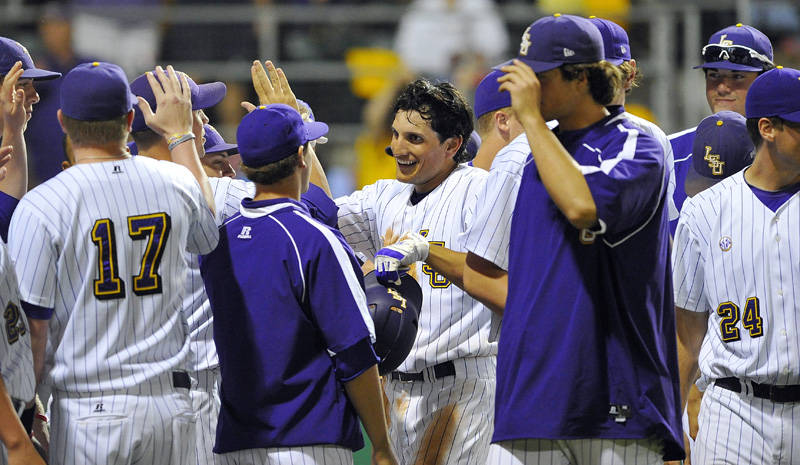 Mahtook became the first Tiger to hit for the cycle since Aaron Hill accomplished the feat on April 5, 2003 against South Carolina. Mahtook went 4-for-4 with five runs scored as he doubled in the first inning, singled in the second, ripped a triple off the wall in the fifth and blasted a two-run dinger in the sixth.

The Tigers (24-4) will return to action Wednesday night in the annual Wally Pontiff Jr. Classic when they face Southern Miss at 7 p.m. at Zephyr Field in Metairie, La. Alcorn State dropped to 14-14 with the loss.

LSU travels to Auburn this weekend for a three-game SEC series at Plainsman Park.

Along with Mahtook’s cycle, LSU’s 20-hit barrage was led by a 3-for-4 performance by first baseman Blake Dean, who had a double and four RBI, and catcher Grant Dozar, who went 3-for-4 with a double and three RBI. Second baseman Tyler Hanover also collected three hits and scored three runs.

LSU starter Ben Alsup (2-0) earned the victory for the Tigers as he pitched six innings and allowed eight hits and a career-high eight strikeouts. Alcorn State starter Troy Williams was charged with the loss after allowing 10 runs on 11 hits in four innings of work.

“We did what we had to do tonight; we won and we were able to conserve our pitching for the rest of the week,” said LSU coach Paul Mainieri. “Ben Alsup and Zach LaSuzzo gave us solid efforts – they combined for 15 strikeouts – and we gave them plenty of run support. We’ll hit the road tomorrow, and we have four very tough ball games remaining this week, starting with Southern Miss tomorrow night.”

The Tigers got on the board in the first inning Tuesday when Mahtook led off with a double down the left-field line, stole third and scored on an infield single by Blake Dean to give LSU an early 1-0 lead. Austin Nola added to the Tigers’ advantage later in the inning when he lifted a sacrifice fly to score Dean from third, putting LSU in front at 2-0.

The Braves cut the deficit to 2-1 in the second inning when right fielder Kilby Perdomo scored from third on a wild pitch by Alsup with the bases loaded. Alcorn State tied the game at 2-2 when the next batter, Edgar Alvarez singled up the middle to plate Warren from third.

Alcorn State took the lead, 4-2, later in the inning when shortstop Cole Vicars blooped a single into shallow center field with the bases loaded to score Reed and Alvarez.

LSU responded with four runs of their own in the bottom of the frame, beginning when left fielder Johnny Dishon launched a two-run homer over the left-field wall to tie the score at 4-4. Dozar singled to lead off the inning and scored on Dishon’s second homer of the season.

The Tigers broke the tie later in the inning when Dean grounded out to first, allowing Mahtook to trot home from third, putting LSU ahead 5-4. The next batter, Matt Gaudet, made the score 6-4 when he roped a sacrifice fly to deep center field, scoring Hanover from third.

LSU increased its lead to 7-4 in the third inning when third baseman Kyle Koeneman and Dozar opened the inning with back-to-back triples. Hanover laced an RBI single later in the inning to make the score 8-4 in favor of LSU. The Tigers went ahead 10-4 when Gaudet lifted a high sacrifice fly to right and Perdomo’s throw got by the third baseman Alvarez, plating Mahtook and Hanover.

The Tigers added five more runs in the sixth inning, highlighted by a two-run double by Dozar and Mahtook’s two-run homer that clinched the cycle. Mahtook tripled to lead off the fifth inning after singling in the second. LSU led 16-5 heading into the seventh when LaSuzzo, a freshman left-hander, entered the game for Alsup.

LaSuzzo earned his first career save as he fired three hitless innings with a career-high seven strikeouts, including six in his first two innings of relief.