Record Streak Ends for No. 12 Softball 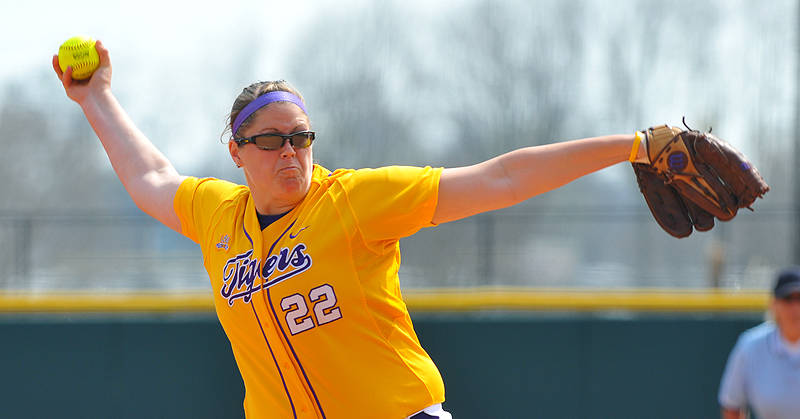 GAINESVILLE, Fla. – The No. 12 LSU softball team had its program-record 24-game winning streak come to a close as No. 6 Florida handed the Tigers a pair of 4-1 and 2-1 setbacks Saturday at Katie Seashole Pressly Stadium in-front of a program-best 2,433 fans.

Cody Trahan pitched a magnificent second game for LSU (29-6, 8-2 SEC) and sat down 15 of the first 17 batters she faced highlighted by nine straight to open the game.

The Tigers dented scoreboard during the third inning. Morgan Russell was hit-by-a-pitch to open the frame, but pinch runner Tiffany Shaw was forced out at second base on the Jessica Mouse sacrifice bunt attempt.

Kirsten Shortridge ripped a single up-the-middle and an Ashley Applegate ground ball moved the runners into scoring position to set up Rachel Mitchell, who knocked a ground ball of her own to shortstop. Shortridge provided a decoy en route to third base in addition to Mitchell hustling down the line to force UF shortstop Megan Bush to misfield the ball and give LSU a 1-0 edge.

Trahan was able to pitch out of trouble with multiple runners on-base in the fourth inning. She clamped down to get Kelsey Bruder to pop up along with Megan Bush to fly out.

Florida had a similar situation two frames later. With two outs, Bruder connected on a 2-2 offering for a RBI-single to even the score at 1-1.

Corrie Brooks provided a walk-off homer to left centerfield with one out in the seventh inning to hand Trahan her first loss of the season. Ensley Gammel allowed two hits and registered three strikeouts against one walk to improve to 6-0.

“Cody pitched well, had them on the ropes and couldn’t quite finish it,” Girouard said. “I’m disappointed that we didn’t win the second game. We made some uncharacteristic mistakes, tried to make way too many things happen and ran ourselves out of some innings. At the same time, give Florida credit. They pitched well and got timely hitting. It was a great atmosphere for college softball.”

Florida jumped out to a 4-0 lead after two innings in game one capped by a Francesca Enea two-run double. Kirsten Shortridge fell to 3-1 and surrendered four hits in over an inning of work.

LSU had opportunities to cash in on Stephanie Brombacher, but left runners in scoring position during each the final four frames. Ashley Langoni belted her team-leading seventh homer of the season to pull, the Tigers back to 4-1 in the fifth inning.

“Tomorrow is another day. The bottom line is we have to touch the plate more,” Girouard said. “Our players have got to do a better job of getting base hits when we have runners in scoring position for us to be successful.”

First pitch of Sunday’s series finale is set for 11 a.m. CT and the game will be broadcasted live on ESPN 104.5 and The X 104.9 FM in the Baton Rouge area with Patrick Wright and Matt Dunaway set to call the action. Live stats also are available on LSUsports.net along with in-game updates on www.twitter.com/lsu_softball.