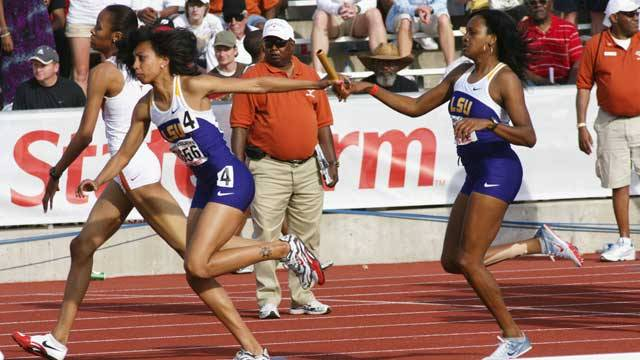 AUSTIN, Texas – It was déjà vu for the LSU women’s track and field team on Saturday afternoon as it put an exclamation point at the end of the 83rd Clyde Littlefield Texas Relays in much the same way it did a year ago with one of the NCAA’s leading performances in the 4×400-meter relay.

The Lady Tigers entered the race as the defending champions of the event after winning their fifth 4×400-meter relay title all-time at the Texas Relays in 2009 with a time of 3 minutes, 31.81 seconds.

LSU, which is coming off an NCAA runner-up finish in the mile relay during the 2010 indoor season, ran with that same team on Saturday afternoon at Mike A. Myers Stadium and provided the more than 20,000 fans in attendance with something to cheer about in one of the more exciting races of the meet.

Junior Brittany Hall led off with a split of 54.48 seconds on the first leg before giving way to sophomore standout Cassandra Tate on the first exchange. Tate proceeded to run the fastest relay split of her career as gave way to senior Kayann Thompson (53.46) with the quickest leg on the team at 51.58 seconds.

Senior LaTavia Thomas took the stick from Thompson on the final exchange trailing Arkansas and Texas by approximately 10 meters. That’s when the All-American kicked it into high gear with a 51.94-second split on the anchor leg and led the Lady Tigers to a runner-up finish to Arkansas (3:31.20) with a seasonal best time of 3:31.46 while gaining on Razorback anchor Whitney Jones on the straightaway.

Texas A&M finished the race nearly one and a half seconds behind the Lady Tigers in third place with the time of 3:32.94, while Texas fell back into fourth place at the finish line with a time of 3:32.98.

“This isn’t just a meet where we like to come and have good performances. I like to see our heart and how well our teams compete. That’s exactly what you saw right there in the women’s relay,” said LSU head coach Dennis Shaver. “Our girls just did a great job. They fought hard all the way through the finish. That is a big step for us. Now we’ve got to keep the pressure on Arkansas. They know how to compete as well.

“I especially thought that was a great performance by Cassandra Tate. There’s someone who lined up this weekend expecting to get it done. We need more people like her stepping up for our team. It’s great to see that from someone who has already had a great season for us. We look for that to continue.”

Following the opening ceremonies at 1:40 p.m. CT, the Tigers stepped onto the track for the finals race of the Clyde Littlefield 4×100-Meter Relay after qualifying with the third-fastest time at 40.28 on Friday.

Electing to run with a team of sophomore Barrett Nugent, senior Will Coppage, junior Gabriel Mvumvure and freshman Johnathan Johnson, LSU raced to the finish line with a seasonal-best time and the fifth-fastest time in the NCAA this season at 39.43. Only the teams from Baylor (39.18) and TCU (39.20) were faster than the Tigers as LSU earned a third-place finish during Saturday’s sprint relay final.

The Tigers have now finished in third place in the finals of the Clyde Littlefield 4×100-Meter Relay twice in a row after becoming the only team in meet history to win the event five-straight times from 2004-08.

Like the Lady Tigers, the men ended the event with an appearance in the Cleburne Price, Jr. 4×400-Meter Relay in which they earned a fourth-place finish with a time of 3:07.36 clocked by senior Armanti Hayes, senior Richard Jones, sophomore Robert Simmons and freshman Caleb Williams.

After qualifying for Saturday’s final in the 4×100-meter relay with the second-fastest time during Friday’s preliminary round, the Lady Tigers did not finish the final race following a missed baton handoff between freshmen Kimberlyn Duncan and Takeia Pinckney on the second exchange.

LSU also earned a pair of fourth-place finishes in the relay events during Saturday’s competition with the men’s 4×200-meter relay team clocking a time of 1:23.23 and the women’s distance medley relay team finishing with the third-fastest time in school history at 11:32.34. The Tigers also saw action in the men’s distance medley relay and finished the race in eighth place with a time of 9:51.85.

Much like the relays, the finals of the men’s and women’s 100-meter dashes were electric on the final day of competition at the 83rd Clyde Littlefield Texas Relays

Senior Samantha Henry was impressive in her runner-up finish in the women’s university 100-meter final as she nearly set a new personal record by crossing the finish line with a wind-legal seasonal best of 11.18 to rank No. 2 in the NCAA and No. 3 in the world this season among wind-legal performances. Henry did not run as fast as 11.18 during the 2009 season until the qualifying round at the NCAA Championships.

She finished behind only the winning time of 11.13 run by Texas A&M All-American Gabby Mayo. Also in the race was Lady Tiger junior All-American Kenyanna Wilson, who took sixth place in the 100-meter final with a wind-legal seasonal-best time of 11.41 seconds after lining up with a top time of 11.56.

Following the fireworks from the women’s final, LSU senior Jerel Hill lined up in the men’s final and ran a new wind-legal PR of 10.35 to match Wilson’s effort with a sixth-place finish of his own.

Junior All-American Zedric Thomas made his outdoor debut in the triple jump on Saturday afternoon and earned a fourth-place finish in the men’s university division with a new wind-legal personal record.

After earning All-America honors with a national runner-up finish in the triple jump at the NCAA Indoor Championships on March 13, Thomas stepped onto the runway for his first triple jump competition of the outdoor season and recorded an outdoor PR of 52 feet, 6 ½ inches with a legal tailwind. Freshman Damar Forbes also earned a 10th-place finish in the event with a top mark of 50-0.

Tiger senior Josh Dominguez was also a leader of the LSU jumps crew this weekend as he earned a sixth-place tie in the men’s university pole vault competition with a clearance at 17-5 on his first attempt which comes just one week after setting a new lifetime best of 17-7 ¼ at the LSU Tiger Relays last weekend.

After becoming the first Lady Tiger to win the women’s university pole vault championship a season ago, sophomore Rachel Laurent came up just short in her title defense with a runner-up finish Saturday with an early outdoor seasonal-best clearance of 13-9 ¾. Senior Katelyn Rodrigue also set an outdoor season best with a clearance at 13-1 ¾ to earn a ninth-place finish in the event.

Junior Tenaya Jones also enjoyed a seasonal-best performance on a beautiful afternoon at Mike A. Myers Stadium as she placed fifth in the finals of the 100-meter hurdles with a wind-legal time of 13.32.

“I thought our teams competed well overall this weekend, but for us to develop into championship threats at the SEC and NCAA meets, we’ve got to start showing consistency each week,” Shaver said. “While we had a great meet with some really great performances, we weren’t as consistent across the board as I want us to be at this point. We have another opportunity to do that next weekend in Miami.”

The Tigers and Lady Tigers will return to action next weekend as they make the trip to Miami, Fla., for an appearance in the Miami Elite Invitational being held at Cobb Stadium on April 10. The teams will return home April 17 to play host to the LSU Alumni Gold at the Bernie Moore Track Stadium.

This year’s LSU Alumni Gold meet will serve as a celebration of the rich history and tradition of the LSU track and field program as the team will hold its inaugural LSU Track & Field Team Awards and Alumni Recognition Banquet on Friday, April 16, beginning at 6:30 p.m. CT at the Crowne Plaza Baton Rouge.

Alumni and their guests who wish to attend this event can submit an RSVP to the coaching staff today by completing this online form. All alumni of the LSU track and field program are invited.