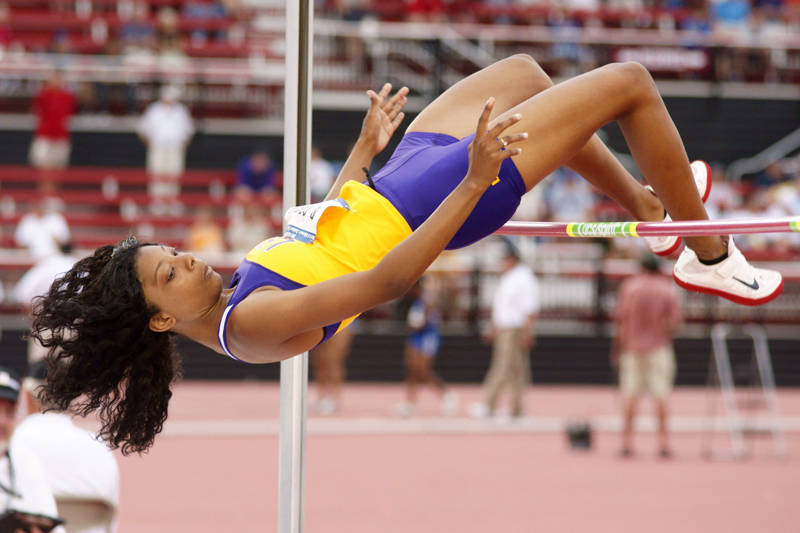 AUSTIN, Texas – The LSU track and field teams set the track on fire on the third day of competition at the 83rd Clyde Littlefield Texas Relays as both the Tigers and Lady Tigers established new school records to sweep sprint medley relay titles and put themselves in the hunt to claim Team of the Meet honors.

It also marked the second relay championship of the weekend for the LSU men after taking the 4×800 title with another thrilling victory on Thursday night at Mike A. Myers Stadium.

The Lady Tigers were the first to step onto the track for the finals of the sprint medley relay with thoughts of a second-straight Texas Relays title dead in their sights.

The team of senior Samantha Henry (200 meters), freshman Kimberlyn Duncan (200 meters), sophomore Cassandra Tate (400 meters) and senior LaTavia Thomas (800 meters) responded with a new LSU school record time of 3 minutes, 43.98 seconds, including a 2:04.89 split by Thomas on the anchor leg. Arkansas finished runner-up to the Lady Tigers with a school-record time of 3:44.40.

Perhaps feeding off the electricity generated by the women’s victory in the sprint medley relay, the Tigers stepped onto the track minutes later for the men’s final and answered with a school record of their own as the group of freshman Caleb Williams, junior Gabriel Mvumvure, sophomore Robert Simmons and senior Richard Jones crossed the finish line with a winning time of 3:16.01.

The Tigers edged teams from Texas A&M (3:16.42) and Baylor (3:16.44) for the title of this year’s sprint medley relay champion at the Clyde Littlefield Texas Relays.

This marks just the second time in meet history that one school has swept sprint medley relays in the 200-200-400-800 format as LSU joins Texas Tech (2005) as the only programs to accomplish the feat.

“That was simply incredible what I just witnessed,” said LSU head coach Dennis Shaver after seeing LSU sweep the sprint medley relays. “That is how you compete. I am proud of each and every one of those kids for the heart they showed out there in two unbelievable races. You could just see how much each one of them wanted to win. That’s exactly the kind of heart and determination we expect from our athletes.

“We’ve had a lot of great relay teams come through this program, and those two can now say that they are the best ever in the sprint medley. You just can’t say enough about their performance.”

A native of Missouri City, Texas, Carter was outstanding in her return to her home state while going over the bar at 6 feet, ½ inch to take home the gold medal with a new outdoor personal record.

Carter breezed through the competition as she cleared heights of 5-7 ¼, 5-9 ¼ and 5-11 ¼ before going up and over the bar at 6-0 ½ also on her first jump. She missed setting  new lifetime personal best on the day as she went out of the competition on three misses with the bar resting at 6-1 ½. Carter earned a clear win as Victoria Lucas of Texas finished in a distant second place with a clearance at 5-9 ¼.

Carter is coming off a 2010 indoor season in which she received her third career All-America honor in the high jump with a fifth-place finish at the NCAA Indoor Championships and won her first SEC crown with a victory at the SEC Indoor Championships. Carter’s lifetime PR of 6-0 ¾ was set during the season.

With her performance Friday, Carter not only ranks No. 1 in the SEC and No. 3 in the NCAA this outdoor season, but she also moves into a tie for the No. 2 spot on LSU’s all-time outdoor performance list.

LSU now owns 68 individual titles and 62 relay titles all-time at the Clyde Littlefield Texas Relays as this marks the 83rd edition of one of the nation’s premier relay carnivals.

“That was my goal to come here and get the win. It still hasn’t hit me yet that I won,” Carter said. “I have never won at the Texas Relays before, and that was a big goal of mine since I am from here. It feels great. It’s also pretty special to be the first one (Lady Tiger) to do it. That’s something that I can take some pride in. This definitely has me looking forward to the next few meets and a great outdoor season.”

The Tigers and Lady Tigers enjoyed an outstanding day of qualifying during Friday’s preliminary races at Mike A. Myers Stadium as they combined for seven qualifiers into finals to be run on Saturday, including four individuals and three relays earning the right to compete on the meet’s final day.

LSU kicked off the day bright and early at 9:30 a.m. CT with the start of the prelims for the 4×100 relays, and both the Tigers and Lady Tigers easily advanced to the final by winning their respective heats.

The women were the first to step onto the track Friday morning and raced to the finish in 44.27 seconds to qualify with the second-fastest prelim time of the day using a team of Henry, freshman Duncan, freshman Takeia Pinckney and junior Kenyanna Wilson. The Lady Tigers also ran the third-fastest preliminary time in the 4×400 relay as the team of junior Brittany Hall, freshman Siedda Herbert, senior Kayann Thompson and Tate carried the stick around the track in a time of 3:37.61.

A trio of Lady Tigers also advanced to Saturday’s final-round action on the track as Henry was the fastest qualifier in the 100-meter dash with a wind-aided time of 11.20. Wilson will also line up in the 100-meter final after clocking the sixth-fastest time of the day with a windy effort of 11.46.

Junior Tenaya Jones earned one of nine qualifying spots for the final of the women’s university 100-meter hurdles by winning her preliminary heat with the third-fastest qualifying time at 13.48.

Like their female counterparts, the Tigers picked up an easy victory in their preliminary heat of the 4×100 relay as the foursome of sophomore Barrett Nugent, senior Will Coppage, junior Gabriel Mvumvure and freshman Johnathan Johnson recorded the third-fastest qualifying time of the day at 40.28. LSU has taken five of the last six Clyde Littlefield 4×100-Meter Relay championships.

The Tigers will feature one finalist in the finals of the men’s university 100-meter dash as senior Jerel Hill won his preliminary heat with a wind-legal time of 10.47 for the seventh-fastest time of the day.

Two Lady Tigers also set new personal bests in field event finals held Friday as sophomore Samia Stokes placed fourth in the discus throw with a mark of 166-6 and junior Melissa Ogbourne tied for sixth place in the long jump with a wind-legal 20-4 ½. Stokes’ performance is tied for No. 9 in the NCAA this season.

“We had a number of outstanding performances today, and we have put ourselves in a position to finish in strong fashion tomorrow,” Shaver said. “We’re expecting some great weather and a tremendous crowd, so our athletes will have an opportunity to compete in an incredible atmosphere tomorrow afternoon.”

The Lady Tigers will kick off the final day of competition for LSU at noon on Saturday with the women’s pole vault, while the Tigers will be the first to step on the track at 12:35 p.m. with the men’s 4×200-meter relay. The 83rd Clyde Littlefield Texas Relays will come to an end Saturday afternoon with the running of the Cleburne Price, Jr. 4×400-Meter Relay at 5:15 p.m. CT.

Following its appearance this weekend at the Texas Relays, LSU will return to action April 10 as it makes the trip to Miami, Fla., to compete in the Miami Elite Invitational being held at Cobb Stadium.