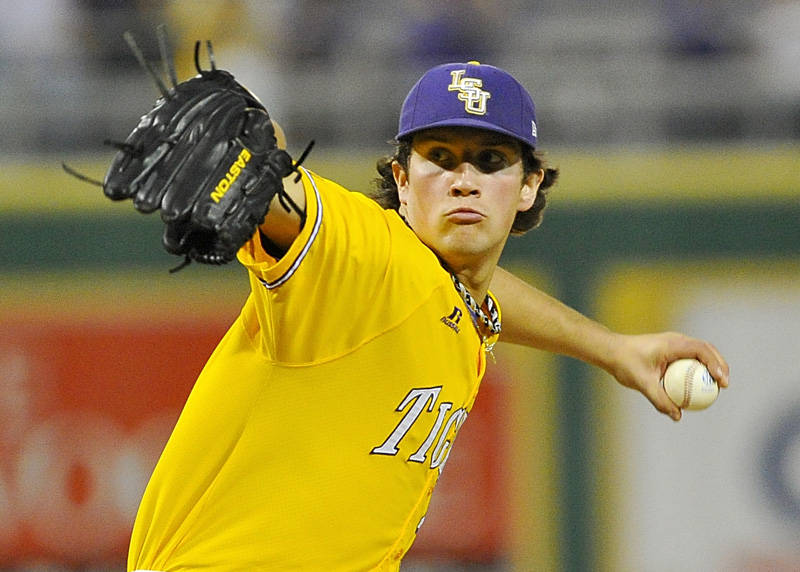 Game 2 of the series will be at 4 p.m. Saturday. The game will be televised live by Fox Sports Net, and it can be heard on the LSU Sports Radio Network. Live stats and audio are available at www.LSUsports.net. The game may also be viewed at www.ESPN3.com.

Saturday’s game is “Skip Bertman Day” in Alex Box Stadium as the LSU coaching legend with be honored prior to the contest.

The LSU pitching staff combined for 13 strikeouts Friday, including six by Chris Matulis (5-0), who was credited with the win after pitching 4.2 innings in relief of starting pitcher Anthony Ranaudo. Ranaudo pitched three innings, giving up one run and striking out four. He threw 55 pitches as he continues to work his way back into the rotation after missing four starts with a stress reaction in his throwing elbow.

“Our pitching won the game tonight,” said LSU coach Paul Mainieri. “We didn’t do a whole lot offensively, but I thought our pitching was outstanding. It was a tough ball game, and I’m glad we were able to come out on top.”

LSU improved to 7-0 this season in one-run games.

LSU leftfielder Trey Watkins dislocated his elbow in the sixth inning while making a diving attempt to catch a foul ball. Mainieri said he did not yet know how long Watkins would be sidelined.

LSU took a 1-0 lead in the bottom of the third inning on an RBI groundout by designated hitter Matt Gaudet, scoring Tyler Hanover who singled earlier in the inning.

Georgia answered in the top of the fourth when center fielder Zach Cone hit a solo homerun to left tying the game 1-1. Ranaudo then gave way to Matulis, who struck out the next three batters to end the inning.

The Tiger regained the lead in the bottom of the sixth. Leon Landry was hit by a pitch to lead off the inning and later stole second. Two batters later, Didier delivered a two-out RBI single to center, scoring Landry and giving the Tigers a 2-1 advantage.

LSU added two runs in the bottom of the seventh inning. The Tigers loaded the bases on a single by Micah Gibbs and a pair of walks to Landry and Mikie Mahtook. Nola flared a two-RBI single down the right field line, scoring Gibbs and Landry and putting the Tigers ahead 4-1.

The Bulldogs responded in the top of the eighth, scoring two runs on a pair of doubles by Peter Verdin and Cone to make the score 4-3.

Sophomore closer Matty Ott struck out the side in the top of the ninth to preserve the win, earning his 10th save of the season, which leads the NCAA.