No. 12 Softball Meets No. 6 Florida in Pivotal Series 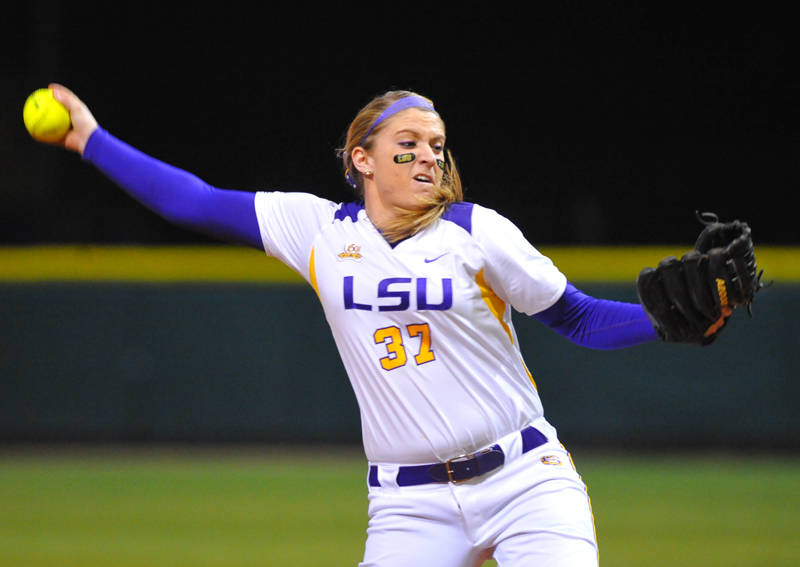 GAINESVILLE, Fla. – The No. 12 LSU softball team heads into the crux of conference play with a pivotal weekend series at No. 6 Florida.

The Tigers have outscored their opponents by an impressive 158-18 margin and racked up a .328 team batting average to go along with a stifling 0.58 ERA during the streak.

“We’ve got some great options both offensively and defensively,” head coach Yvette Girouard said. “I love our team because we’ve develop into a well-rounded cohesive unit. The key for us is we’ll have to continue to pitch well. We’ll also need to play sound defense and get timely hitting.”

“Florida is a tremendous program and leads the nation in home runs,” Girouard said. “Tim [Walton] has done a great job with their program, and we’re going to have to play our best ball to be successful. I feel like we’re prepared. This road trip is a prime example of why you put the uniform on.”

LSU’s offense is sparked by seven players who have already racked up more than 15 RBIs on the season. The Tigers also have posted a 75-for-80 mark in the stolen base department and shattered a total 46 steals during the entire 2009 season.

Kirsten Shortridge is the catalyst at the top of the lineup. She has slapped 52 hits and tallied 18 multi-hit efforts, both rank third in the SEC. The Keller, Texas native also has swiped 31 stolen bases and notched a scorching .522 batting average during her last 19 games.

Shortridge posted 4.0 frames of no-hit relief last time out at McNeese State to improve to 3-0 on the season. It was her first action in the circle since Feb. 28 against Houston.

Ashley Applegate has smacked hits in 24 of 33 games en route to a .340 batting average. She also has coaxed a team-best 18 walks and reached base during all 24 games of LSU’s winning streak.

Rachel Mitchell, the reigning Louisiana Sports Writers Association [LSWA] Hitter of the Week, has strung together four consecutive multi-hit efforts. Her average climbed 75 points during the month of March to check in with a .361 hitting clip, three home runs and 25 RBIs.

Anissa Young has powered hits in seven of eight SEC contest sparked by a quartet of RBI-double to raise her average to .307 for the season. She has surged into a seventh place tie in the SEC with 27 RBIs and totaled 23 of her team-best 27 RBIs during the streak.

Ashley Langoni and Juliana Santos returned to the lineup at McNeese State. With LSU down 2-0, Santos ripped the go-ahead three-run homer in the third inning and reached base in five of her last six games. Langoni is batting .286 and has belted a team-best six longballs to go along with 16 RBIs after coming away with a .227 clip last season.

Courtney Hollier has chipped in RBIs in four of her last six games, while Morgan Russell has compiled a .423 mark at the plate during her last 13 outings.

Jessica Mouse has already racked up 17 RBIs and eclipsed her 2009 total of 14. She has garnered six multi-RBI efforts and reached base in 24 of 31 games where she has registered an at-bat. Her defense at third base has been just as impressive and her 55 assists rank just outside the SEC’s Top 10.

LSU has tossed 14 shutouts, including nine in the last 15 games dating back to March 5. The Tigers not only pace the SEC but the NCAA with a 0.76 staff ERA.

Cody Trahan, Rachele Fico and Brittany Mack represent LSU among the league’s Top 3 in ERA. The trio has picked up at least six wins apiece during the streak.

Trahan has a sparking 8-0 record, sports a SEC-leading 0.48 ERA and yielded only four runs in 58.0 innings. She also has notched 65 strikeouts against five walks and tossed shutouts to open the South Carolina and Auburn series.

Fico has strung together 10 straight wins with three saves and limited opponents to a .144 average since opening weekend. In her last start, Fico shut down Auburn in the series finale and enters the weekend with 25.1 consecutive scoreless frames dating back to March 6.

Mack is 7-2 with a 0.92 ERA and fired a three-hit shutout with five strikeouts in her last outing at Southeastern Louisiana. She also mixed in a one-hitter in the middle game of the South Carolina series.

All three games of the series will be broadcasted live on ESPN 104.5 and The X 104.9 FM in the Baton Rouge area with Patrick Wright and Matt Dunaway set to call the action. Live stats also are available on LSUsports.net along with in-game updates on www.twitter.com/lsu_softball.