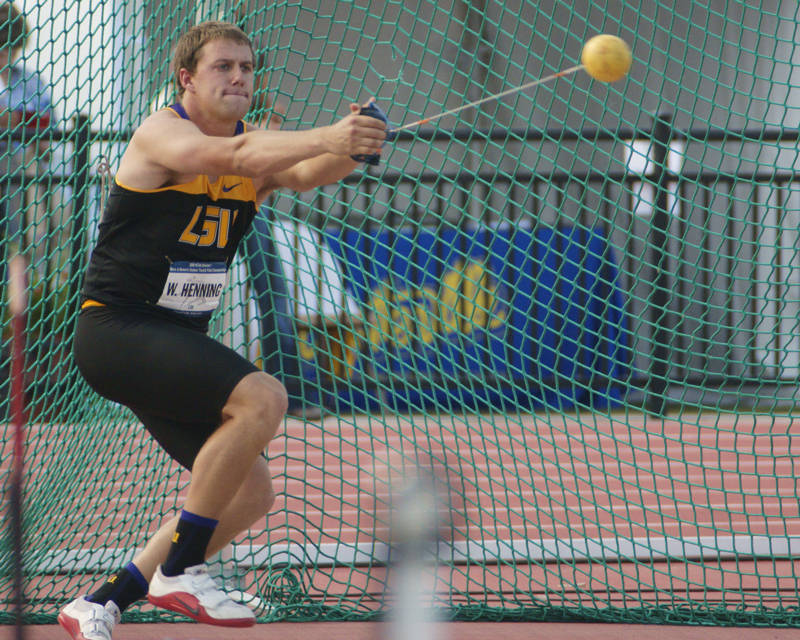 AUSTIN, Texas – After being crowned NCAA champion in the 35-pound weight throw in his last appearance for the Tigers at the NCAA Indoor Championships nearly three weeks ago, LSU junior Walter Henning continued his winning ways on Thursday afternoon as he became the first Tiger in meet history to win the hammer throw title at the Clyde Littlefield Texas Relays.

And Henning did so in record-setting fashion once again as he set a new personal record and shattered his own LSU school record in the event with a mark of 236 feet, 1 inch on his second attempt.

LSU had never had one of its athletes climb to the top of the medal podium as champion of the hammer at the Texas Relays in the previous 84 years of the meet’s existence.

But Henning put an end to that streak in dominating fashion on Thursday as he finished more than 15 feet beyond his closest competitor. UTEP’s Dimitrios Fylladitakis finished runner-up with a throw of 220-1, while LSU teammate Michael Lauro took third place with an impressive season-opening mark of 213-4.

With his performance in his outdoor season opener, the junior from Kings Park, N.Y., has already jumped to the top of the NCAA standings this season in the hammer throw as his mark of 236-1 ranks No. 1 in the country. He is a strong candidate to win the NCAA hammer throw championship after finishing runner-up in the event at the NCAA Outdoor Championships as a sophomore in 2009.

LSU now owns 67 individual event titles all-time at the Texas Relays as Henning is the first to capture the gold medal in the 83rd edition of one of track and field’s most prestigious relay carnivals.

“I’m really happy getting a win here at the Texas Relays. This is a big win for me,” Henning said. “It’s an important step being my first meet outdoors. I’m happy with my throw, even though it wasn’t a very good technical throw. I’m actually kind of surprised it went as far as it did. I’m also really happy that both Max (Lauro) and myself were able to get out there and compete well today against some great competition.”

LSU also captured its 60th relay championship all-time at the Texas Relays during Thursday’s competition as the Tigers wrapped up the day by winning their third 4×800-meter relay crown in meet history.

The Lady Tigers were the first to step on the track for LSU during Thursday’s action with the title of two-time defending champions in the 4×800-meter relay following victories in 2008 and 2009.

But the women fell just short of their bid for a third-straight 4×800-meter relay crown at the Texas Relays as the quartet of junior Brittany Hall, freshman Charlene Lipsey, senior Kayann Thompson and senior LaTavia Thomas earned a second-place finish with a time of 8:35.64. The Arkansas Razorbacks won gold just a split-second ahead of the Lady Tigers with a winning time of 8:35.18.

Senior Kim Williams was the first LSU athlete to compete at this year’s meet, and she set the tone with an impressive personal best in the university section of the women’s hammer throw. Williams was the fourth place finisher in the competition with a mark of 195-9 on her fifth attempt of the afternoon.

In fact, Williams set two personal bests during Friday’s competition as she posted a throw of 195-2 on her third attempt before finishing with a top mark of 195-9 on her fifth attempt.

Sophomore Marcus McGehee also enjoyed a personal-best performance during Thursday’s events with an outstanding clearance at 17-1 to earn a third-place finish in the B section of the men’s pole vault.

“What a great way for us to start out at the Texas Relays this week,” said LSU head coach Dennis Shaver. “Walter was tremendous for us in the hammer, and the men wrapped it up nice with our first relay title for the weekend. We hope to see more of that in the next two days. It was just a great day of competition with both of our teams and we look forward to an exciting weekend starting tomorrow morning.”

The action continues for LSU at the 83rd Clyde Littlefield Texas Relays on Saturday at 9:30 a.m. CT with the preliminary round of the men’s and women’s 4×100-meter relays. The field events are set to begin for both the Tigers and Lady Tigers at 10 a.m. at Mike A. Myers Stadium.