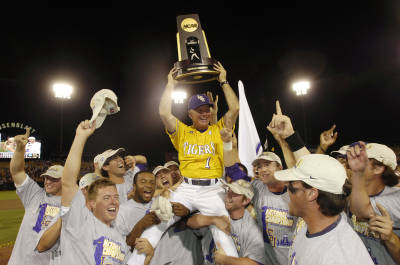 OMAHA, Neb. — The Team of the 90s has returned to the top of 21st-century college baseball. The LSU Tigers brought home a sixth national championship to decorate its new Alex Box Stadium by besting top-seeded Texas, 11-4, in the third and deciding game of the 2009 College World Series on Wednesday.

Third-year coach Paul Mainieri — who wasn’t hired to bring the Tigers back to Omaha, but to win championships — fulfilled his destiny. When he hired the 25th baseball coach in school history on June 28, 2006, Bertman said, “It would take someone special to lead this program … someone who would thrive in the high expectations of a championship program. I believe LSU has found that man.”

One last time, Bertman’s move paid off in Omaha.

Mainieri also called on lefthander Chad Jones to replace Ranaudo. The two-sport star added a baseball ring to go with his 2007 BCS National Championship by holding down the Longhorns for 1.2 hitless innings.

Taking his rightful place in LSU history, senior Louis Coleman took the mound for the final two innings and earned the dogpile he richly deserved. Disappointed with the CWS ending in 2008, Coleman returned for his senior season to win a championship.

The Tigers, who started four freshmen for most of the season, took the lead for good in the top of the sixth when freshman centerfielder Mikie Mahtook doubled to right field to chase Texas reliever Brandon Workman (3-5) and ignight a five-run sixth inning.

LSU manufactured two more runs before senior first baseman Sean Ochinko slashed a two-RBI single through the left side to give LSU a 9-4 lead.

Not only was Ochinko re-inserted into the LSU lineup for game 3, but Mainieri asked him to bat clean-up so that Dean could see better pitches. Ochinko responded with a 4-for-5 performance with three RBI in his final game wearing purple and gold.

Just like the old Skipper, all of the new skipper’s moves paid off in the postseason just as they did in his regular-season lineup flip.

The Tigers earned a 4-0 lead through two innings, as Jared Mitchell hit a two-out, three-run homer in the first inning. Ryan Schimpf drove in Micah Gibbs in the second with another two-out single.

The Tigers added single runs in the eighth and ninth innings on a sacrifice fly by Ryan Schimpf and a solo homer by Ochinko.

Texas (50-16-1) bounced back from a 7-6, 11-inning loss on Monday to force the rubber match with a strong 5-1 victory on Tuesday. The Longhorns were denied their seventh national championship.

(thoughts at the moment of championship): “My first thoughts are with this wonderful university and with this state and its tenacious people. This championship is for them.”

(about the team): “We’ve had a wonderful group of kids. They’ve done everything you’ve asked them to do. They did everything they needed to do to be called champions.”

(his dad’s championship): “As we were getting the outs in the ninth, my thoughts were with my family. My dad won this championship 45 years ago at the Junior College World Series. The Mainieri family has gone 45 years without a championship.”

LSU starting pitcher Anthony Ranaudo
(about Mitchell’s three-run home run in the first inning): “As the starting pitcher, the three-run home run in the first gives you a lot of room to go and compete and throw strikes. I didn’t have my best stuff today. That has been the story of the season for us, when the pitchers didn’t have their best stuff, the hitters picked them up and when the hitting wasn’t going the pitchers picked them up.”

LSU second baseman DJ LeMahieu
(about the game overall): “Everyone contributed to this game. [Mitchell] had the three-run home run, [Ochinko] had a two-run single, [Ranaudo] competed as hard as he could and [Jones] came in and did a great job.”

LSU outfielder Jared Mitchell
(about if there was a better way to finish his career): “If there is a better way, write the story for me. It’s been so much fun … to accomplish something like this with these players.”

Texas head coach Augie Garrido
(opening statement): “I would like to thank the CWS committee, the people of Omaha and the NCAA. This is a fabulous event. They’ve created a national tournament that is so meaningful to all that participate.”

(about the game): “We all saw it together. LSU is a very talented college baseball team. I don’t think we lost the tournament. They won it. It was a well deserved championship for LSU.”

(about whether he felt as if there was meat left on the bone in the early innings): “Only if you’re talking about the six runners that didn’t score. That could have changed the momentum. I’m not willing to pick our team apart. They (LSU) beat us. They did what they needed to do to win the game.”

Texas left fielder Preston Clark
(about the magical run of the team during the last month): “ It’s been amazing. Every one of these guys has pulled for each other. This is the best team we’ve ever been a part of. They punched us in the month, and we couldn’t get a rally going. It is a tough loss. I love these guys; it was a great run for us.”

Texas second baseman Travis Tucker
(about Keyes’ home run to tie the game): “ We were excited to tie the game up. We came back and we just thought we’d keep rolling.”

(about the five-run sixth inning): “They answered back; it was devastating. They got the momentum back, they’re a great ballclub.”