It's GameDay: LSU vs. Penn St. in Capital One Bowl 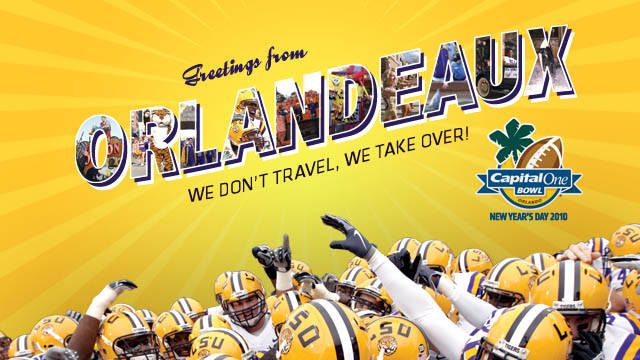 ORLANDO ? Les Miles will put his perfect record against non-conference opponents as head coach at LSU on the line on Friday when the 13th-ranked Tigers face 11th-ranked Penn State in a battle between two college football powerhouses in the Capital One Bowl.

Kickoff for the Tigers and the Nittany Lions is scheduled for noon CST from Florida Citrus Bowl Stadium. The game will be televised nationally on ABC. LSU goes into the contest with a 9-3 overall mark, while Penn State is 10-2.

Friday’s game will mark only the second meeting between the programs and the first since the 1974 Orange Bowl when Penn State and Joe Paterno beat the Tigers and Charles McClendon, 16-9.

Since then, the Tigers have been perfect in non-conference games, winning all 23 of their contests against teams from outside the SEC. The 23-game streak also includes four bowl victories, all of which were against teams ranked in the top 20.

Another milestone the Tigers will be after on Friday is that of trying to join only Alabama and Florida as the only teams in the history of the SEC to win 100 games in a single-decade. Alabama won 103 games in the 1970s under Bear Bryant, while Florida won 102 contests in the 1990s under Steve Spurrier. LSU has posted a 99-30 record this decade.

“I always hesitate to put too much on a single game, but the opportunity to finish the season specifically with ten victories, to play a great team in Penn State, to get a victory and a bowl championship, and the opportunity to win our 100th game in the decade is certainly a very special spot in college football,” Miles said on Thursday. “That has not gone beyond our team’s view and certainly it is a part of the feel of this game.”

If the Tigers are to reach that 100-win milestone for the decade, they will have to do it against a Penn State squad that is one is good on both sides of the ball. Penn State led the Big Ten in total offense (412.5 yards per game) and scoring defense (11.83 points per game). The Nittany Lions, behind the play of quarterback Daryll Clark and running back Evan Royster, have scored 30 or more points eight times this year.

Defensively, the Nittany Lions are stingy against the run, allowing just 93 yards per game, a figure that ranks 10th in the nation. Penn State has held six of its 12 opponents to 10 points or less.

One of the keys for the Tigers will be their ability to run the football, which falls on the shoulder of sophomore Stevan Ridley, who will be making only his second career start. Ridley started the year fourth on the depth chart, but injuries to seniors Charles Scott (collar bone) and Keiland Williams (ankle) and junior Richard Murphy (knee) has put the sophomore in the starting role. Ridley has rushed for 167 yards and two touchdowns in a limited role this year.

“His preparation has been very good and I expect that he will play his best,” Miles said of Ridley. “I think that he has ability and skill.  He will be subbed in and out with some other guys, but I think that there’s a great chance that he’ll play his best game.”

Ridley will be joined in the backfield by speedster Trindon Holliday (116 yards, 1 TD) and converted quarterback Russell Shepard (277 yards, 2 TDs).

The Tigers will hope to benefit from what has been an outstanding month of bowl preparation from sophomore quarterback Jordan Jefferson. Jefferson has thrown for 1,964 yards, 16 TDs and just six interceptions this year. Jefferson had his breakout game last year against Georgia Tech in the Chick-fil-A Bowl as he was named the game’s most outstanding offensive player in LSU’s 38-3 win.

“I think our quarterback is getting better,” Miles said. “I think he’s getting better in every way, in operating the offense, in his reads, in making checks, and in communicating. That’s what we expect of him.  These first two years have been ? he’s on the underside of the learning curve now.

Defensively, the Tigers will again rely on the play of the linebackers, a group that features that top four tacklers. Junior Kelvin Sheppard leads the team with 103 tackles, followed by Perry Riley (92), Harry Coleman (77) and Jacob Cutrera (74).

The Tiger defense also features one of the best cornerbacks in college football in Patrick Peterson along with hard-hitting safety Chad Jones. Up front, the Tigers will continue to rely on its two-deep rotation with Al Woods, Charles Alexander and Drake Nevis being used to help stop a Penn State rushing offense that is averaging 174 yards on the ground a game.

“I see this game as a great matchup,” Miles said. “This is a game that will pit guys from two different conferences, two traditionally great football teams, teams that have accomplished through the years and a game that will create a curiosity throughout our country to see how Penn State and LSU match up.

”We’ve had great preparation; now it’s time to put our plan on the field and execute it. I’m excited and I know the players are excited about the opportunity to face Penn State. It should be a great game and I’m looking forward to watching this team compete.”

LSU Bowl Notebook
LSU coach Les Miles has a shot to win his 10th game as head coach of the Tigers against a coach who has won a national title. Joe Paterno has two national titles to his credit. Miles has wins as LSU’s head coach against the following national champion coaches – Phillip Fulmer (twice), Urban Meyer (twice), Steve Spurrier (twice), Larry Coker, Nick Saban and Jim Tressel.
With a win, LSU will record its 10th 10-win season in the modern day history of the program. Currently, Miles has credit for three of the school’s nine 10-win seasons.
LSU is 4-0 in bowl games under Miles. Miles trails only Charles McClendon (7) in bowl victories at LSU.
All four of LSU’s bowl wins under Miles have come indoors ? two at the Louisiana Superdome and two at the Georgia Dome. LSU has won seven straight bowl games indoors, while the Tigers have lost its last two bowl games played outside ? 2005 Capital One Bowl, 2002 Cotton Bowl. LSU hasn’t won a bowl game played outdoors since a 27-9 win over Notre Dame in the 1997 Independence Bowl.