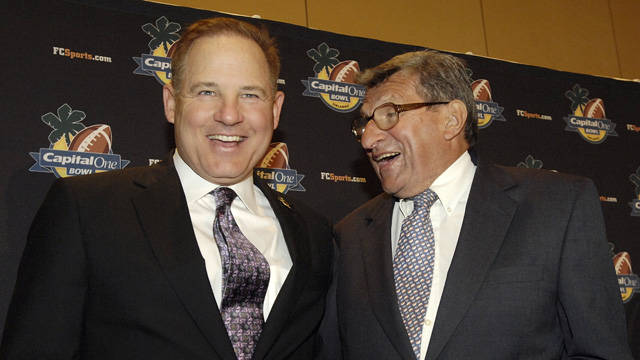 Listen to the press conference archive now, and check back at 7 p.m. ET (6 p.m. in Baton Rouge) for The Les Miles Show – Capital One Bowl Edition, live from the Renaissance Orlando SeaWorld.

Fans in Orlando are invited to the lobby area of the team hotel to watch the show live.

On the week in Orlando
First of all, the Capital One Bowl committee has done a great job hosting our team. The practice facilities have all been first-class. Our guys have really enjoyed being here. I tell you, our practice has gone well, and as with every bowl week, we look forward to playing the game.

On his success in bowl games and the secrets to that success
Having good teams. Having teams that want to play, who understand the opportunity to play well in their last game. We think we do some good things, but I don’t know that it’s any different, I don’t know that there’s any magic.

On the trend of college football players complaining about treatment from coaches
It’s always hard for me as a coach, to sit on the perimeter of issue and try to figure out what really went on. The specifics of a number of those spots seem unusual and difficult to explain, but I don’t know and it’s hard to be overly critical. I can tell you some things that we do and don’t do in our program that sound familiar. So like I said, it’s hard for me to be overly critical.

On the importance of this game to finish out the decade of success for LSU
I always hesitate to put too much on a single game, but the opportunity to finish the season specifically with ten victories, to play a great team in Penn State, to get a victory and a bowl championship, and the opportunity to win our 100th game in the decade is certainly a very special spot in college football. That has not gone beyond our team’s view and certainly it is a part of the feel of this game.

On Penn State and his background in the Big Ten
I was at Michigan as an assistant coach when Penn State entered the Big Ten Conference. I remembered that they chose to put them initially to play Michigan, I don’t know initially that they had Ohio State on the schedule. I wondered how we got so lucky to have Penn state and those other guys didn’t. I’ve always felt like Penn State was a tremendous team and very well coached, and certainly a favorite of those Pennsylvania boys to go to school. There’s always been great competition with Penn State and all the Big Ten schools. They’re one of the elite teams in that conference by far, and Coach Paterno has done a great job, and he’s done it over time. It’s hard to use the world legend, but he certainly is an icon in coaching.

On what keeps him up at night about Penn State
The first thing that’s keeping me up at night is Ben Miles (Coach’s youngest son) … Other than that, it’s a quality, quality team that we’re playing. They have a very good defense, a very strong front seven. They’re very capable on the corners and the perimeter. [They have] an offense that can run it and throw it, a quarterback who can move his feet, just solid, quality special teams. Besides Ben, that’s what’s keeping me up at night.

On the Citrus Bowl field
I don’t know the specifics of the field, certainly, and I’m sure that the groundspeople there are doing everything that they can to put that field in order for this game. Certainly you want no field to be directly a cause to injury, and you want it as fast-tracked as you can be. Without knowing exactly how that field’s gonna play and what it looks like today, it’s going to be hard for me to comment. I just couldn’t imagine that the bowl committee’s not working feverishly to put that field back into repair and give us the opportunity to play on a great turf. I guess I’ll be able to speak to it more pointedly on game day.

On the additions to his coaching staff (RB coach Frank Wilson and WR coach/passing game coordinator Billy Gonzales) and the rumors of John Chavis going to Georgia
The new coaches have jumped in. It’s an unusual situation. They’ve jumped right in. They’ve accommodated the offense. They will be instrumental in coaching this game. Both Coach Gonzales and Coach Wilson will have game day responsibilities and they will be working hard. To me, they’ve done a great job in accommodating the offense and understanding what we’re going to need and expect from them game day. The only subtraction that I see is Larry Porter gone to Memphis as the head coach. Certainly we’ll miss Coach Porter. I think he’ll have great success at Memphis. I expect no other subtractions and no distractions to this game, and John Chavis certainly would be a party and a part of that comment.

On Urban Meyer and coaching burnout
I think I should have a stress coach. Anytime I feel a little tight, maybe I should just have this guy come over and I could just punch him or something, or I could just scream at him and just back away and let him have to deal with it, right? [laughter] Coach Meyer has his own considerations, and the only thing I can tell you is we have a life, and it’s your responsibility to steward that life well, and your responsibility is to your family and to your team and to your sons and daughters and to your school that you represent, and you have to do the right things. I certainly supported Coach Meyer’s initial comments and I support the fact that he’s back. I want for him not to be in poor health. I want him to be capable and ready, and to say in any way that that was a sign of weakness or that that was a bad comment from his school, I don’t know. I think, being honest, if you in fact are honest, it may well be the right thing to do. I’m glad he’s back. I want to compete against him. I think that’s the best thing I can say.

On playing a “power program” for just the second time
I think there’s a curiosity, if you will, with every bowl game, certainly this bowl game not being an exception, that when you see your opponent’s team, their players kinda walk around and you enjoy the view and you wonder how good and how capable and how that matchup’s gonna be. Coach Paterno, I don’t know how anybody matches up with that guy. He’s special. I look forward to this. Playing games with teams that you’re not necessarily familiar with, I think it’s exciting. You just hope to represent well and you hope to play your best.

On the growth of Jordan Jefferson in the bowl process
I think our quarterback is getting better. I think he’s getting better in every way, in operating the offense, in reading reads, in making checks, in communicating, and he needs to. That’s what we expect of him. These first two years have been ? he’s on the underside of the learning curve now. We should reap some benefits. I think he’ll play better in this game and I think he’ll play better next season. I think it’s fair to say that he’s going to continue to improve.

On the Citrus Bowl turf possibly slowing his team down
We expect that the turf will be equal for both teams. If we have fast guys and they get in close quarters and they’re still fast, and it’s soft turf, hopefully they’ll make the cut and maybe those guys that aren’t so fast will not operate as well. But it’s hard for me to speculate for better or worse, one side or the other, when we both play on the same field.

On the perception of Penn State power vs. LSU speed
I see that Penn State has good quality players. I see speed in Penn State’s team. Certainly at receiver and quarterback and in their secondary, and I think their linebackers are very capable. I see it as a matchup that will pit guys from two different conferences, two traditionally great football teams, teams that have accomplished through the years and a game that will create a curiosity throughout our country to see how Penn State and LSU match up.

On the idea of a bowl game being “easy” or a reward
I see that there’s a balance that needs to be struck with any bowl schedule that allows you to prepare for the game that you’re going to play and the enjoyment of the city and the sights and to take part in bowl events. I can tell you, preparation for a football game is not easy. Any time that you line up to play in a postseason game, there is an opportunity to win. I think that our football team certainly understands that that’s an opportunity they want to take full advantage of. They want to play for that. I don’t know that easy’s exactly it. I think that there’s a good balance. I think that there’s a responsibility to the schedule to allow fun to be had. I don’t know that “easy” is necessarily the word.

On Stevan Ridley’s adaptation to the role of starting running back
His preparation has been very good and I expect that he will play his best. I think that he has ability and skill. He will be subbed in and out with some other guys, but I think that there’s a great chance that he’ll play his best game.

On New Year’s Eve plans
I hope to be asleep before New Year’s time changes. I think that everybody’s kinda looking forward to tomorrow. I don’t imagine that we’ll be bringing in the new year with any great celebration.