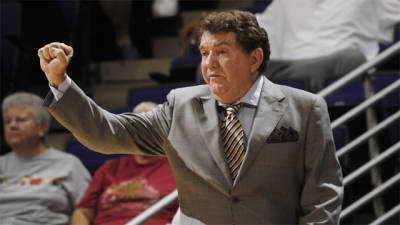 CINCINNATI, Ohio — The architect of four WNBA championships with the Houston Comets and the coach of the 2004 United States Olympic gold medal team, LSU head coach Van Chancellor has added another accolade to his Hall of Fame career by winning his 500th collegiate game on Wednesday night.

“This was a return to the way we used to play defensively,” Chancellor said. “We told our team we had to return to the Lady Tiger way. We had tough practices after Christmas and prepared well for this team. This was a great basketball team we beat tonight. I am really proud of our effort. We learned a lot from the loss at Nebraska. That was an absolute wake-up call.”

The Lady Tigers (11-1) closed their non-conference slate with their first win over a ranked non-SEC opponent on the road since at No. 18 Michigan State on Dec. 17, 2006. LSU opens Southeastern Conference play at South Carolina on Sunday in Columbia. The game will be televised live nationally on ESPNU at 5 p.m. CST.

Xavier (9-3), who was coming off an 81-60 win over Mississippi State, was held to a season-low 47 points and never found a rhythm offensively. The Musketeers came into the contest averaging 74.5 points per game but were held 28 points below their season average.

LSU forced the Musketeers into 21 turnovers ? 11 in the first 20 minutes — that allowed the Lady Tigers to build as large as a 13-point lead in the waning minutes of the first half. With the score tied at 10 apiece at the 11:42 mark, LaSondra Barrett ignited a 9-0 run with a 3-pointer. It would be the final time the game would be tied.

Hightower pushed the lead to double-digits on a bucket with 6:27 to go to make it 23-13. Hightower added two free throws and Eason’s 3-pointer gave the Lady Tigers a 35-25 advantage into the locker room. The 25 points were the fewest by Xavier in a half this season.

The Musketeers climbed back into the contest in the second half and got to within two points, 42-40, when Katie Rutan buried a 3-pointer with 8:13 left. With the momentum in favor of Xavier, LSU delivered two crucial buckets before the shot clock expired on both attempts.

Forward Courtney Jones connected for her first 3-pointer of the year with two seconds left on the shot clock, and Graham put in a bucket of her own as the clock expired on an assist from Hightower. The baskets changed the complexion of the game and put LSU in front 49-43.

“That was a big time play by Courtney Jones,” Chancellor said. “She had the presence to shoot the ball and it went in.”

Xavier could get no closer than four points the rest of the way. LSU’s tough defense held the Musketeers scoreless from the field in the final 4:35. Their last basket was on a Ta’Shia Phillips layup. The powerful inside tandem of Phillips, the reigning Atlantic 10 Player of the Year, and Amber Harris was held to a combined 26 points.

LSU shot 38.2 percent from the floor and held Xavier to 31.4 percent for the game.

Chancellor became the 24th active Division I coach to reach 500 wins and the 39th Division I coach all-time to reach the 500 plateau. The 2007 Naismith Hall of Famer, in his 22nd year overall, won 439 games in 19 seasons at Ole Miss and he has captured 61 victories in now his third season at LSU.

“In the scope of things that doesn’t seem important, the 500 wins,” he said. “I am more proud of our team and what they did tonight. That is what is important. These players deserve the credit.”