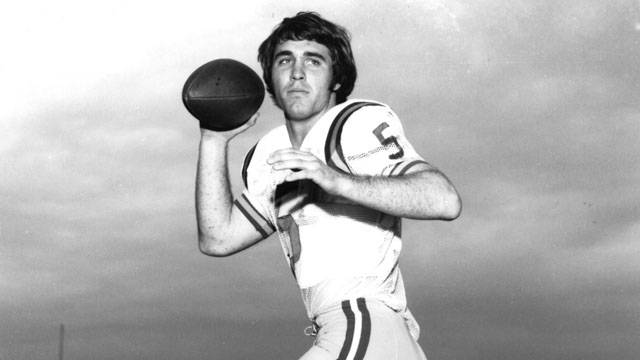 At first, the 1974 Orange Bowl figured to feature prominently in the 1973 national championship race. Announced with a couple of games left to play, the Miami-based bowl selected two distant ? but undefeated ? programs in 9-0 Penn State and 9-0 LSU.

“I’ll be pulling for you,” Paterno said.

A Tiger triumph against the Crimson Tide would have served the Nittany Lion cause twofold, both eliminating a fellow title contender and bestowing more legitimacy upon a potential bowl game victory.

Certainly, Paterno saw the writing on the wall when Bear Bryant’s Alabama team handed LSU a 21-7 defeat. Both in 1968 and 1969, Paterno had finished the season 11-0 after claiming Orange Bowl victories over Kansas and Missouri. In both years, the Nittany Lions laid no claim to a national crown, twice finishing second in Associated Press balloting.

A 14-0 loss to Tulane in the regular season finale dropped the Bayou Bengals to 9-2. Their Orange Bowl counterparts, on the other hand, wrapped up their season a perfect 11-0. Having received no help, however, Penn State stood sixth in the polls. Their stature ? or lack thereof ? in the rankings sealed for all intents and purposes a third undefeated season without a national championship.

While neither team would win a championship, each still had plenty to play for.

Despite yet another undefeated but uncrowned season, the Nittany Lions were not entirely without hardware. Running back John Cappelletti picked up the school’s first Heisman Trophy and was determined to finish his career with a win. In one of the more memorable Heisman acceptance speeches, he thanked his teammates, saying, “I don’t think I could have gotten any closer to the group that I have been with and I think it takes a lot of hard work to do what we’ve done this year.”

LSU’s motivation came not from success but from its recent failures. The loss to Tulane was the school’s first since 1948, and so disheartened was All-American linebacker Warren Capone that after the game he remarked, “This is something I will have to live with the rest of my life.”

A torrential South Florida downpour prior to the New Year’s Day game was so bad that nearly 14,000 of the 74,154 fans that purchased tickets didn’t even bother showing up, choosing instead to watch the game on television.

Exacerbating the problem was the fact that for six seasons in the early 1970s, the Orange Bowl experimented with using PolyTurf as the playing surface rather than natural grass. The rain-slicked plastic grass led to conditions that Cappelletti referred to as the worst field he’d ever played on.

Perhaps eager to set a tone different from that of a team who scored only seven total points in its last two games, LSU won the coin toss and elected to receive. On the opening drive, the Tigers looked like the version of the squad that won its first nine games rather than the team that dropped its last two.

Brad Davis accounted for 39 yards on five rushing attempts before fellow running back Steve Rogers found the end zone from three yards out. The scoring drive took only 3:47 and nine plays to complete.

The masterful execution soon yielded to the overbearing conditions, however. The two teams traded three-and-out drives until the Nittany Lions found the scoreboard on a 44-yard field goal with 1:25 left in the first quarter.

LSU was unable to respond with a field goal of its own when Juan Roca’s 54-yard attempt was blocked on the subsequent drive. The teams again exchanged stalled drives before Penn State took command of the game with a series of big plays.

On the second play of a drive beginning at their own 27-yard line, quarterback Tom Shuman connected with Chuck Herd for a 72-yard touchdown pass that gave Penn State a 10-7 lead. LSU was unable to get anything going and once again punted. A 36-yard return gave the Nittany Lions great field position, and Shuman pieced together a methodical nine-play scoring drive that put them up 16-7 following a missed extra point.

Looking to narrow the margin in the final two minutes of the half, the Tigers were forced to punt again but extended the drive on a roughing the punter penalty. Regrouping, they nearly trumped their opening-drive effort as quarterback Mike Miley took off on an 18-yard run and then completed three more passes to give LSU first and goal with only seconds to spare. The standing water, however, made a field goal far from guaranteed, as evidenced by three missed field goals and a missed extra point over the course of the game. Choosing instead to stay with the hot hand, LSU gambled and came up short when Miley’s pass fell incomplete and the clock ran out.

Despite giving up the deep pass and yielding the punt return that led to the second touchdown, the LSU defense went into the half with a measure of pride after holding the newly-crowned Heisman winner to only 21 yards on 11 attempts in the first two quarters.

The defense, led by Warren Capone, forced yet another three-and-out to open the second half. Rather than simply getting the ball back, the Tigers were gifted a safety when the ball sailed over the punter’s head and out of the end zone, putting the game back within one score, 16-9.

That would be the end of the scoring, though, as each team struggled through the sloppy conditions. Would-be scoring drives were killed by interceptions and missed field goals. The Nittany Lions were held to an astonishing minus-30 rushing yards in the second half. Cappelletti finished with a season-low 50 rushing yards on 26 attempts.

However, Capone was still impressed by the Penn State running back.

“He’s better than anybody we’ve played,” the linebacker conceded following the game. “He’d get hit and still make 3 or 4 or 5 yards.”

LSU was undone by big plays and missed opportunities. Despite trailing in the final margin, the Tigers outgained their opponent 274 yards to 185 and 18 first downs to nine.

Penn State would consider the game a missed opportunity of its own. The Nittany Lions once again saw an undefeated season end without a national championship, this time finishing fifth in the Associated Press final poll.